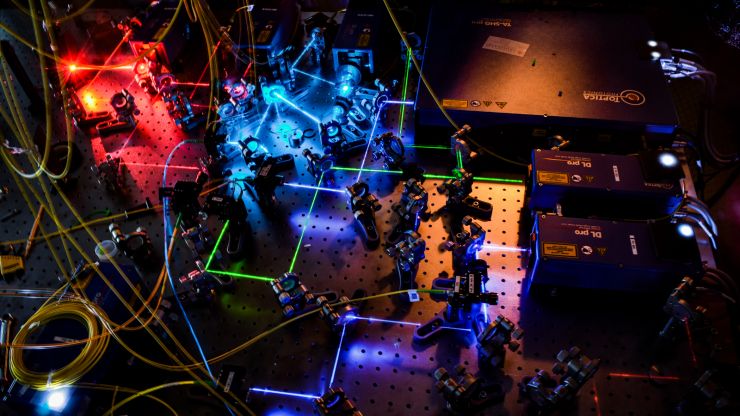 Chris Monroe, professor of ECE and physics and director of the Quantum Information Center, said, “Our technology is based on individual atoms that are levitated above a chip in a vacuum chamber and we poke them with a laser beam. That’s our computer!” While the history of computers is rooted in silicon and solid-state physics, this technology avoids the microscopic variations unacceptable in quantum processing by relying on the atom, the one thing void of manufacturing discrepancies. 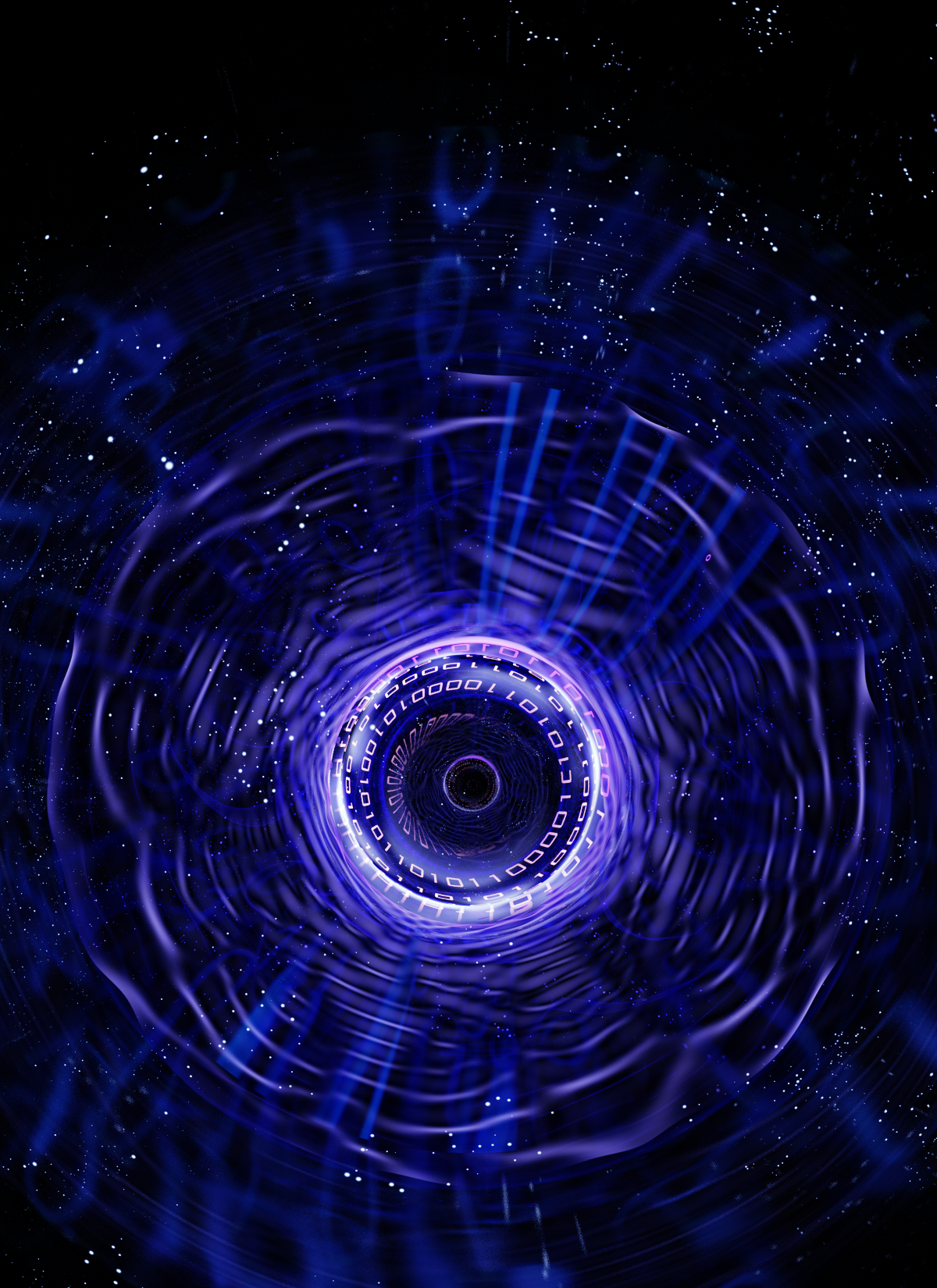 Quantum is a new frontier that many universities and industry giants such as Google and IBM are racing to pioneer. Monroe and Jungsang Kim, also a professor of ECE and physics, are the founders of IonQ, the first publicly traded, pure-play quantum computing company. In a field with such powerful competitors, what makes up that Duke difference?

“Most universities and researchers are focused on a single component, but Jungsang decided it was time to move on from the component to the system,” explained Monroe. “Building a system isn’t typically done in universities. This is where Duke is unique. We build systems and use those systems to do science. And that does belong at a university.” Monroe is referencing the center’s “full stack approach,” which consists of designing every aspect of the quantum information stack, from the atom to the algorithms.

According to ECE Professor Ken Brown, an advantage of the full stack approach is optimization. Alone, if we were to change a component in one sector, it may be less efficient. However, if we change something small in multiple places, the system can become more efficient overall.

In such a new and dynamic field, it is natural to see students flock to quantum. Franklin Bo-ampong (‘22 ECE/CS) worked in Brown’s lab in 2019 and teaches the Introduction to Quantum Computing House Course with his fellow Duke Quantum Information Society members, or DuQis.

Being from Ghana, Boapong wanted to build a device to help farmers but needed a way to connect his device to farmers without a stable internet connection. When he brought up this problem, Brown informed him that quantum computers could not directly solve this problem, but by joining the research group he would gain skills that could be applied to any problem. While many view quantum as the end-all, be-all for technology, Monroe is more cautious. “This field has a lot of hype in it,” he said. “Quantum computing may not be a panacea, and it may not solve every type of problem. But it will solve certain problems.”

While quantum computing seems like a distant reality that has only been theorized, Brown finds that the work being done at the university and in the rest of the field is a beacon that shows engineering students in particular that quantum computing has arrived.

Quantum presents some unique challenges. A common conception surrounding the field is that the classical language we usually use is not suited to describe quantum phenomena and that the only language suitable is pure math. Monroe agrees that not having analogies does make quantum confusing, but explains that the math in quantum isn’t different. “It’s a plain ‘ole wave equation, no harder than water waves or plucking a guitar string and the fundamentals,” Monroe said. “And you usually learn that in one of your first engineering or physics courses.”

Even if you are lacking in the math department, professors like Brown are often happy to take on students who don’t yet have that skill but are willing to work on the lasers or vacuum chambers. In other words, students who are willing to build up more mechanical, technical and experimental skills. 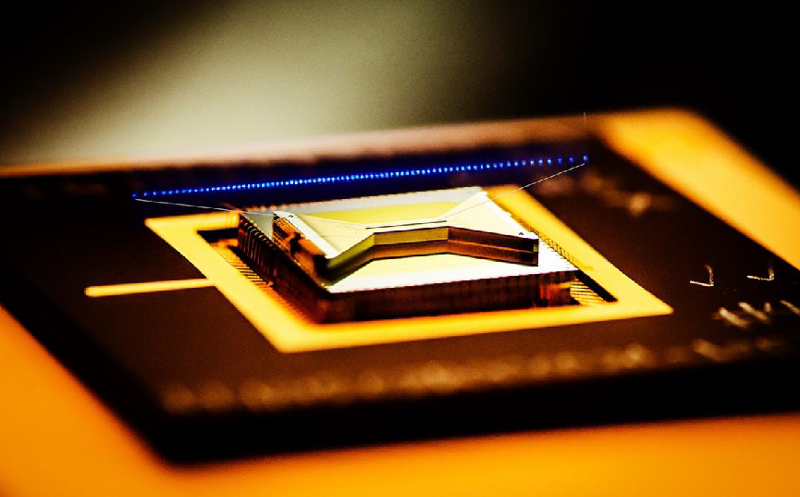 Preparing Students for a Career in Quantum

So how is Duke preparing Pratt stars for a career in quantum? It starts with creating a strong foundation. From Boampong’s experience, the prerequisite classes at Duke prepare you to understand the basics and math behind quantum computing by teaching the foundations with linear algebra, quantum mechanics, optics and electromagnetism. Once you have the background, there are opportunities for students who want to dive into quantum such as ECE 420: Introduction to Quantum Engineering, taught by Brown.

Outside of the classroom, the DQC provides opportunities for hands-on experience. “I always hire as many undergrads as I can until my graduate students revolt,” Brown quipped. “And that ratio is about three graduates to one undergrad.” Those at the DQC want to give undergrads the opportunity to work on the state-of-the-art quantum computer and find that they often bring a unique perspective and set of skills. 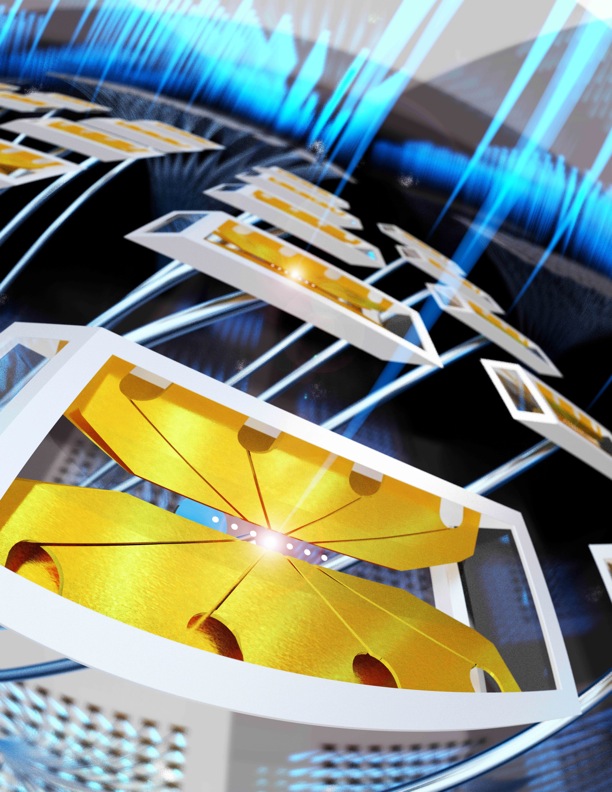 From making the quantum computer to using it, the center embraces Duke’s interdisciplinary culture. On the design side, Brown says he appreciates people bringing their disciplinary knowledge to an interdisciplinary problem. “One thing we forget is that something that you find challenging, people in another discipline find very easy,” Brown said.

When the quantum computer is running, the DQC is often approached by people from all kinds of backgrounds: finance, molecular design, drug discovery, oil and gas, and even cosmology. “They come to us because we can test some of these basic ideas with a small quantum computer,” Mon-roe said.

The environment at the DQC is also described as collaborative, where, as Boampong puts it, you can ask anybody any question. For example, Brown recalls a graduate student saying, “I can’t tell the difference between students who are in the Kim lab and students in the Brown lab.” Brown commends the design of the center, because of how much great space there is to sit at a whiteboard outside of the office or talk to each other in a small conference room.

Another sentiment that is expressed by those at the center is the feeling of unity and support by both Duke and Duke Engineering. “Duke is unified top to bottom in this vision,” Monroe said. “Not just the departments, but the deans all the way up to the president are excited about this vision. At Duke, we’re moving so much faster because we’ve decided the direction we’re going to go and we’re going to push it to the limit. We also happen to have the winning technology, and that doesn’t hurt. From a high level, what sets us apart from the others is the strong bond between science and engineering at Duke, initiated by Jungsang Kim many years ago." Kim has been with Pratt since 2013 and over the years has unified his collaborators at Duke.

So what’s next for the Duke Quantum Center? The environment in the Chesterfield building feels like that of a startup—exciting and rapidly growing. Recently, the teams have rehoused the quantum computer after a move and are already working on getting a second one up and running. While the building is new, faculty and students have already expressed a desire for more space. The DQC has already filled the labs, the quantum community is expanding rapidly, and it’s only going to get bigger.

Vinnessa Van is a sophomore majoring in mechanical engineering, minoring in physics and pursuing the aerospace certificate.