Ravi Bellamkonda, a renowned biomedical engineer, will be the new Vinik Dean

Ravi Bellamkonda, a renowned biomedical engineer who has led one of the top-ranked departments in the country, will be the new Vinik Dean of the Pratt School of Engineering at Duke University, President Richard H. Brodhead and Provost Sally Kornbluth announced Tuesday. 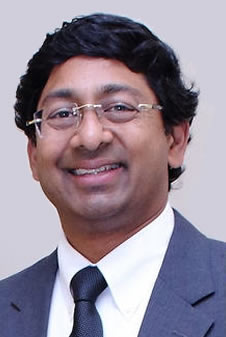 Bellamkonda is the Wallace H. Coulter Professor and chair of the Wallace H. Coulter Department of Biomedical Engineering at Georgia Institute of Technology and Emory University, a unique collaboration between the two Atlanta institutions at which he holds a joint faculty appointment.  His Duke appointment, which is effective Aug. 1, comes after an international search chaired by Jeff Glass, professor of electrical and computer engineering. Bellamkonda succeeds Tom Katsouleas, who was named provost of the University of Virginia in 2015.

"The ascent of the Pratt School of Engineering has been an important development in Duke's ability to generate knowledge in service to society, as engineering plays a critical role in addressing virtually every contemporary challenge," Brodhead said.  "Ravi Bellamkonda has a record of outstanding personal accomplishment and visionary leadership. Working with Pratt faculty and students, he will continue Duke Engineering's remarkable trajectory and will be an excellent partner across the university."

“Ravi Bellamkonda has led many innovative programs that have brought together the intellectual resources of two great universities.  This ability to enable productive collaborations bodes well for his ability to lead in the highly collaborative Duke environment,” said Kornbluth. “I also want to express my special gratitude to Jeff Glass and the search committee for their thorough and diligent work throughout this process, and also to George Truskey, who stepped in on short notice to serve so ably as interim dean.”

Added search committee chair Glass, "We are very excited to have someone of Ravi's caliber joining Pratt. His leadership experience is outstanding and will enable him to continue the upward trajectory Pratt has enjoyed in recent years."

Bellamkonda’s own research involves an exploration of the interplay of biomaterials and the nervous system for designing novel brain-machine interfaces, using immunomodulation to foster nerve repair and design devices for brain tumor therapy.  It is supported by grants from the National Institutes of Health, the National Science Foundation, Ian’s Friends Foundation, Georgia Research Alliance and the Marcus Foundation.

“I am excited about the Pratt School’s future, and our ability to continue building an innovative engineering school where scholarship, inquiry and entrepreneurship are valued,” said Bellamkonda.  “Pratt’s faculty are thought leaders in areas of critical importance to our economy, security, health and the environment.  We can help shape the future by fostering an experiential engineering curriculum that moves away from a ‘content-mastery’ emphasis, toward a ‘learning-mastery’ mindset.”

A graduate of Osmania University (India) who received his Ph.D. from Brown University and did post-doctoral training at MIT, Bellamkonda started his career at Case Western Reserve before moving to the Coulter Department of Biomedical Engineering in 2003. From 2010-2013, he served as associate vice president for research at Georgia Tech, where he led programs to enhance translational research, technology transfer and programs that encourage innovation in research and education and faculty development.

Bellamkonda is the president of the American Institute for Biological and Medical Engineering (AIMBE), a policy advocacy group, and is a frequent consultant on biomedical engineering research and education.  He’s the recipient of numerous honors, including the Clemson Award for Applied Research from the Society for Biomaterials, the EUREKA award from the National Cancer Institute, a CAREER award from the National Science Foundation, and the best professor award from the Georgia Tech BME students.

With 1,240 undergraduates and 960 graduate students in five degree programs, Duke’s Pratt School of Engineering is a recognized global leader in undergraduate education through initiatives such as the National Academy of Engineering Grand Challenge Scholars Program and Pratt Research Fellows.

The school’s graduate programs have grown by nearly 30 percent over the past five years, and external research funding has more than doubled over the past decade, to more than $76 million in total expenditures in 2015.  The Pratt School is home to major research centers focused on areas including biomolecular and tissue engineering, metamaterials, photonics, environmental implications of nanotechnology, materials science, materials genomics and quantum computing, among others.