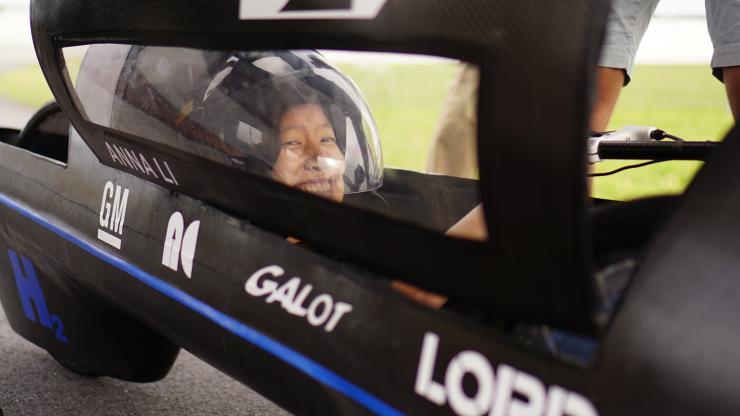 Duke Engineering is now the official home of the most fuel-efficient vehicle in history, a hydrogen fuel cell car that gets the equivalent of 14,573 miles per gallon. Duke Electric Vehicles (DEV’s) record-breaking run took place on Saturday, July 21 at Galot Motorsports in Benson, North Carolina. Guinness World Records has confirmed that the attempt to set a new record for fuel efficiency was successful. DEV bested the old record set by ETH Zurich, which stood for 13 years.

To set the new world record, the car traveled eight and a half miles of track and used less than one gram of pure hydrogen.

“To put that in perspective,” said outgoing DEV president and electrical engineering graduate Patrick Grady, “our vehicle is capable of driving to any point on the globe using the energy in one gallon of gas.”

Our vehicle is capable of driving to any point on the globe using the energy in one gallon of gas.

The prototype car—named “Maxwell” after James C. Maxwell’s equations describing electromagnetism—placed first in the hydrogen category at the Shell Eco-marathon Americas in Sonoma, California in April of this year. The car’s bank of supercapacitors provided the driver with short bursts of energy when she needed to climb or accelerate; to charge the supercapacitors, the team deployed a fuel cell much smaller and lighter—and with narrower margins for error—than that of the competition. The novel design earned DEV a Technical Innovation Award in addition to a win.

DEV is part of an energy community cultivated by the Energy Initiative, one of Duke’s interdisciplinary initiatives focused on bringing knowledge to the service of society. The club publicly shares its designs so anyone interested in designing and fabricating high-efficiency vehicles can benefit from its research.

“This world record is a perfect example of how our ‘outrageously ambitious’ educational and research activities in Duke Engineering lead to remarkable and tangible results in the field of sustainable energy,” said assistant professor of the practice of mechanical engineering Nico Hotz, who advises the team. “By creating a collaborative and open environment and community, we enable our students to reach groundbreaking results: DEV’s new fuel cell vehicle was designed, built and optimized entirely by the students themselves.” 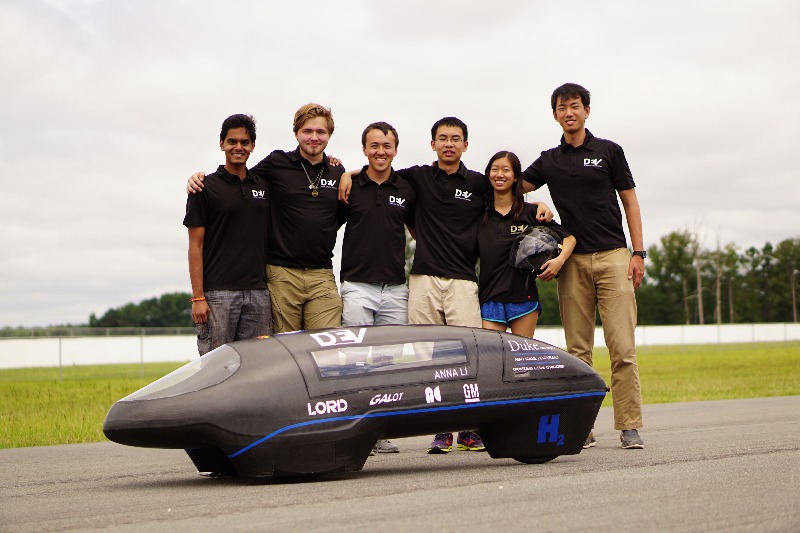 According to mechanical engineering student and incoming DEV Co-president Shomik Verma ‘19, the team already has its sights set on breaking another record. “Building off the success of our hydrogen fuel cell vehicle, we are hoping to beat the battery electric vehicle record next year,” said Verma. “Our electric efficiency is within five percent of the record based on our data from the recent attempt, so with improvements to the aerodynamics of the body and reduction in weight, we should be viable competitors for the record.”