Despite a year full of obstacles, the Duke Motorsports team built an 80-MPH racecar from the ground up 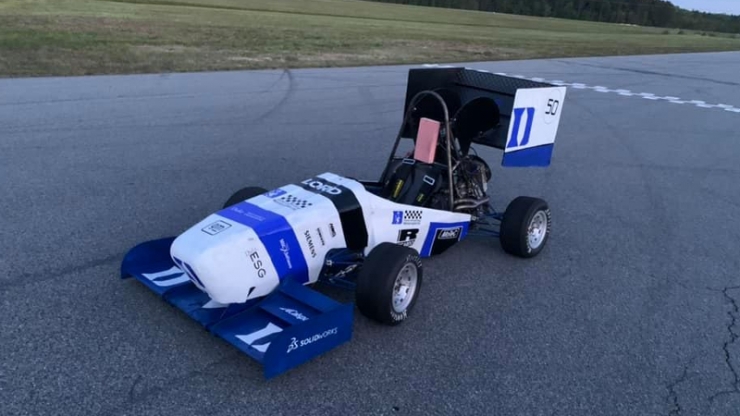 There may not have been as much fanfare at the end of the semester as the members of Duke Motorsports are used to, but that doesn’t make the successes any less sweet.

Every year, a few dozen ambitious students tackle the challenge of building a Formula-style race car from scratch. While the previous cars and lessons learned are used as a template, many obstacles remain as the students work to implement design changes and extended validations as a new car takes shape.

This year was no exception, even in the face of additional obstacles posed by COVID-19 restrictions. The team’s workspace was limited to a capacity of five, and any pre-organized gathering of more than one person needed to be registered and approved within the UCAE DukeGroups system. While not insurmountable, it was a far cry from the norm of students showing up at all hours of the day and night to work hands-on in groups.

But as they say, every time a door is closed, a window is open. In this case, the opening came in the form of having more time for the members to reach further into the design and validation areas of the race car. Analyzing the vehicle's overall performance and compliance before jumping in allowed the team to implement many new changes they were hoping to work on prior to the pandemic.

So when, in the final weeks of the semester, 10 of the team’s members received permission from the university to take their work and test it out at the North Carolina Center for Automotive Research, the opportunity sounded extra exciting.

“In my eyes, this was one of the most valuable years the team has had since its inception at Duke,” said Edgar Uribe III, a graduating mechanical engineering major and leader of the team. “The team currently has about 50 active members, most of whom had never seen a running Formula-style car before. With no competition last year, and a high likelihood of not attending initial competition schedules this year either, it was crucial that all the students got to see the process of designing, building and testing from beginning to end. As hard as the COVID limitations on Duke’s campus made that, everybody on the team put in their best effort and we made it to the end of the school year with a running vehicle to test.”

In normal years, the team would have taken their race car out to the test track earlier in the year with an eye toward taking it to competitions in the second week of May. But given that the team often wasn’t sure whether or not they’d get a working car completed by the end of the year at all, the progress they made was remarkable.

Several new technologies were implemented into the car. A motor was used to turn the shifter on the engine. Sensors determined the position on the throttle pedal to better control acceleration. More depth was added to the suspension tuning techniques to optimize performance for varying events. And with the exception of the shaft on the shifter shearing in the team’s initial attempt to shift while driving the vehicle, all of the new technologies proved successful.

“When the day began, we had problems in our shifting mechanism, chain drive and aero package,” said Uribe. “However, after analyzing and remedying those issues, we were able to run our vehicle for a sustained period of time. We ran a full competition-style endurance run of more than 13 miles at sustained race speeds, reaching a top speed of almost 80 miles per hour on the track.

“Although it doesn’t look like we’ll get to compete this summer, I hope I’ve left the team in a better spot than when I joined my freshman year and that the team continues to grow not only in size, but in knowledge and understanding of the car and the competition as a whole.”