The face of America’s energy grid is changing rapidly with the constant addition of small-scale solar panel installations. But due to a lack of detailed information, that portrait looks more like a Picasso than a Rembrandt.

Earlier this year, the United States hit a benchmark of one million solar installations, generating enough electricity to power 5.7 million homes. That number is expected to double in just two years.

While these data are tracked on a large scale—states provide information to the federal Department of Energy roughly once per year—there is little information about exactly where solar energy is being adopted on a county, city or neighborhood level. This is an oversight that the Department of Energy and other government agencies are turning to researchers to fix, including an interdisciplinary group at Duke University, led by Leslie Collins, professor of electrical and computer engineering and biomedical engineering at Duke. 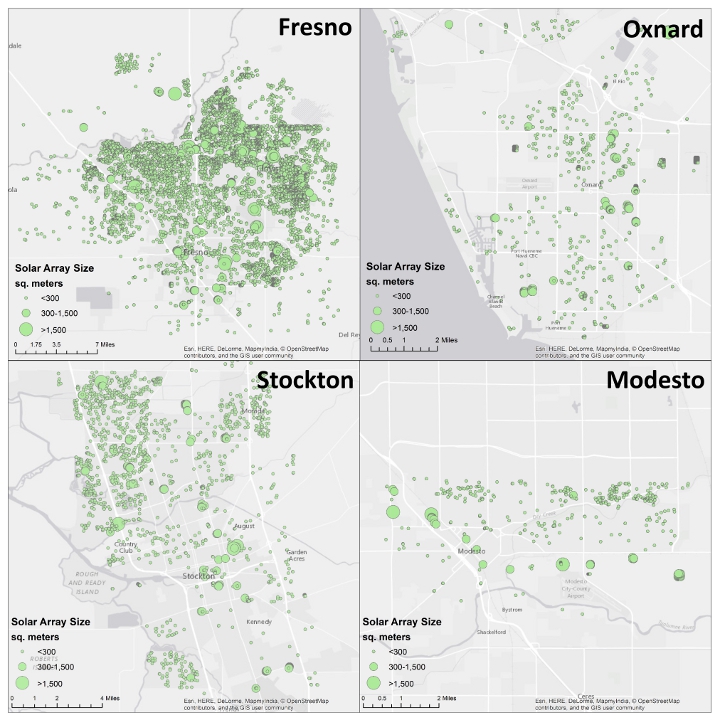 “Our power grid is designed for a single centralized power source to distribute energy out to the public,” said Kyle Bradbury, managing director of the Energy Data Analytics Lab at Duke. “But more and more we’re seeing these small solar panel installations being connected to the grid and actually contributing power. At some point, the needs of our power lines and grid infrastructure are going to change.”

Regulatory agencies would like to get out in front of this shift toward distributed power generation, if possible. With precise data about where solar energy is being adopted and how it is changing over time, officials could predict where to install new technology to meet changing demands. Social scientists could get a better understanding of how policy affects the adoption of solar panels. Economists could better value the future of the 8,000 solar companies employing more than 200,000 American workers.

At present, however, the only way to get this information is to go through the local public utility commission interconnection records, which is a tedious and not easily automated task. Alternatively, one could enlist the help of a group of students to pore over satellite images and pick out solar panels by hand—also a tedious task.

But that’s exactly what Collins and Bradbury did through the summer Data+ Program and an ongoing Bass Connections project. Data+ is a 10-week summer research experience for Duke undergraduates interested in data-driven approaches to interdisciplinary challenges. Bass Connections is a program at Duke offering grants to interdisciplinary collaborations.

In the Data+ project, students built a data set to train computers to spot solar panels by meticulously annotating 58 square miles of satellite imagery of Fresno, California. That dataset formed the foundation for a Bass Connections project where students explored real-world machine learning techniques applied to relevant energy questions, including the hunt for solar panels.

And luckily for everyone, the summer spent circling solar panels appears to have been enough to train a computer to do the job.

“The aerial imagery being developed now has resolution down to about a foot, so you can see the solar panels by eye,” said Jordan Malof, a research scientist in Collins’s lab, who works on the algorithms designed to spot solar panels and leads the research in the Bass Connections project. “And the rule of thumb is that if a human can see it, then you can probably program a computer to see it too.”

To teach computers how to spot solar panels, Malof is turning to “deep learning”—a buzzword in computer science circles. The idea is that if you give a computer enough examples of what solar panels look like from the sky and compare them to similar photos where there are no solar panels, the computer can teach itself to distinguish between the two.

According to Malof, it’s almost like developing a synthetic visual cortex—the part of the brain that processes visual information through several consecutive layers of neurons. In a deep learning project, the trick is to pick how many layers to incorporate and how many connections to put between individual “neurons,” among other factors.

The whole process involves turning different knobs and trying different settings to try to optimize the results. With a dataset of 20,000 individual annotated solar panels and 100,000 image chips covering 1.5 billion pixels of satellite imagery from the U.S. Geological Survey, Malof is starting to get dialed in.

“The simple statement is that it’s working pretty well,” said Malof. “We can catch about 80 percent of the solar panels that are there with only three false positives per square kilometer.”

As the research group continues to make improvements, they plan to expand their efforts beyond solar arrays.

“We’re starting to look into more general estimates of energy consumption,” said Bradbury. “We want to see if we can use the volume of buildings, estimated from aerial photography, to approximate energy consumption in a given area. Not only would these techniques provide important information for smart grid infrastructure planning in the U.S., they could be valuable tools for international development in any country undergoing the process of energy infrastructure planning.”