All That Is Gold Is Not Biochemically Stable 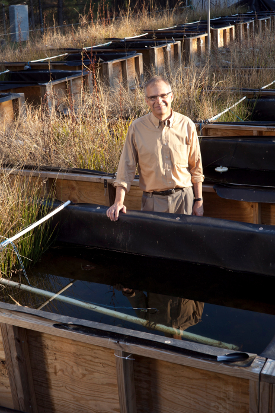 It turns out gold isn’t always the shining example of a biologically stable material that it’s assumed to be, according to environmental engineers at Duke’s Center for the Environmental Implications of NanoTechnology (CEINT).

In a nanoparticle form, the normally very stable, inert, noble metal actually gets dismantled by a microbe found on a Brazilian aquatic weed.

While the findings don’t provide dire warnings about any unknown toxic effects of gold, they do provide a warning to researchers on how it is used in certain experiments.

The study was published August 13 in the journal Nature Nanotechnology.

CEINT researchers from Duke, Carnegie Mellon and the University of Kentucky were running an experiment to investigate how nanoparticles used as a commercial pesticide affect wetland environments in the presence of added nutrients. Although real-world habitats often receive doses of both pesticides and fertilizers, most studies on the environmental effects of such compounds only look at a single contaminant at a time.

For nine months, the researchers released low doses of nitrogen, phosphorus and copper hydroxide nanoparticles into wetland mesocosms—small, manmade structures containing different plants and microorganisms meant to represent a natural environment with experimental controls. The goal was to see where the nanoparticle pesticides ended up and how they affected the plant and animal life within the mesocosm.

The researchers also released low doses of gold nanoparticles as tracers, assuming the biologically inert nanoparticles would remain stable while migrating through the ecosystem. This would help the researchers interpret data on the pesticide particles that partly dissolve by showing them how a solid metal particle acts within the system.

But when the researchers went to analyze their results, they found that many of the gold nanoparticles had been oxidized and dissolved.

“We were taken completely by surprise,” said Mark Wiesner, the James B. Duke Professor and chair of civil and environmental engineering at Duke. “The nanoparticles that were supposed to be the most stable turned out to be the least stable of all.”

After further inspection, the researchers found the culprit—the microbiome growing on a common Brazilian waterweed called Egeria densa. Many bacteria secrete chemicals to essentially mine metallic nutrients from their surroundings. With their metabolism spiked by the experiment’s added nutrients, the bacteria living on the E. densa were catalyzing the reaction to dissolve the gold nanoparticles.

“This is a good lesson that underscores how real, complex environments, that include for example the bacteria growing on leaves, can give very different results from experiments run in a laboratory setting that do not include these complexities.”

This process wouldn’t pose any threat to humans or other animal species in the wild. But when researchers design experiments with the assumption that their gold nanoparticles will remain intact, the process can confound the interpretation of their results.

“The assumption that gold is inert did not hold in these experiments,” said Wiesner. “This is a good lesson that underscores how real, complex environments, that include for example the bacteria growing on leaves, can give very different results from experiments run in a laboratory setting that do not include these complexities.”

This work was done at the Duke Center for the Environmental Implications of NanoTechnology (CEINT), which is supported by the National Science Foundation and the Environmental Protection Agency under NSF Cooperative Agreement EF-0830093 and DBI-1266252.