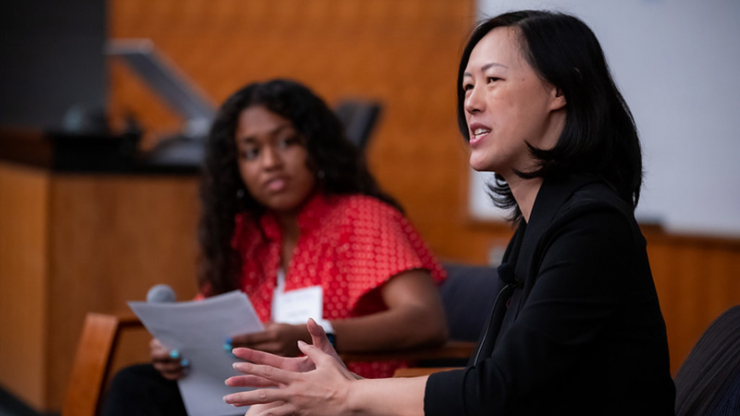 Deborah Liu is a seasoned technology executive based in Silicon Valley. She is currently president and CEO of Ancestry, the company at the forefront of family history and consumer genomics. After graduating with an undergraduate degree in civil engineering from Duke University in 1998, Liu earned her MBA from Stanford and went on to serve on the leadership team at Facebook, where she was the vice president of Facebook App Commerce.

On November 10, Liu gave a talk at Duke about her new book, Take Back Your Power: 10 New Rules for Women at Work. The event was part of Duke Engineering’s fall Board of Visitors weekend, which drew over 40 alumni, parents, and friends of the program to learn about the school’s progress and help shape its vision for the future.

"I want students—and younger generations in general—to know that they have so much more power than they think they do."

During the three-day event, attendees also heard from Dean Jerome Lynch about Duke Engineering’s efforts to:

The Board of Visitors also heard messages from other speakers about the school’s push to increase diversity in its student body and faculty, as well as its efforts to help the Christensen Family Center for Innovation push lab-developed solutions out into the real world.

In this Q&A, Liu shares her thoughts on her experience at Duke Engineering, the school’s efforts to equip its students to tackle the world’s grand challenges, and her advice for future engineering leaders. 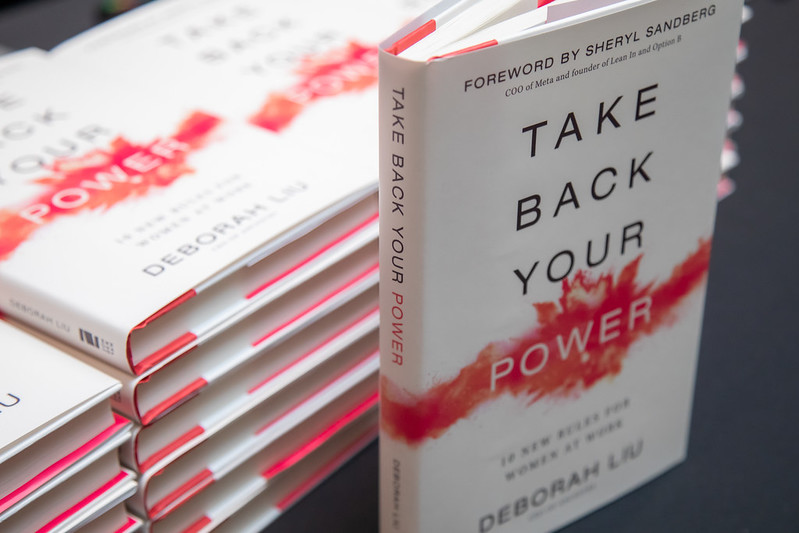 What is the biggest idea or piece of advice you want students to take away from your talk?

I want students—and younger generations in general—to know that they have so much more power than they think they do. If they take the time to understand it and learn to wield it, they can make a difference in the lives of the people around them. You can be a great mentor, a great peer, or a great friend to somebody, and you can really change their life without even thinking about it.

Is there a specific example you can provide from your own life?

Amy Klement, the Vice President of Product Management at PayPal took a chance on me and several other people without any experience in the industry. She changed our lives. So many people have told her that we wouldn’t be where we are without her—people who are CEOs, founders, and senior executives of billion-dollar companies. She was only in her early to mid-twenties at the time, and so were we. Amy changed our lives.

What are some of the experiences or life lessons that you learned through your engineering degree that have helped you along your way?

I used to think that engineering school was all about hard skills and figuring out how to do the mechanics of engineering. But the thing that actually made the most difference from Duke was the soft skills. Those often mean the difference between success and failure. I love that Duke really emphasized that. It wasn't just about getting the problem sets right or understanding how to build something, but it was also about learning how to communicate solutions and explain why you were doing what you were doing. Because in the end, so many failures are not actually engineering failures—they are communication failures. I think that the most important skill an engineer has is their ability to communicate and persuade.

What are some of the biggest changes you’ve seen in the engineering curriculum between when you attended and now?

I think the biggest thing is that we are looking at these global problems not as engineering problems, but as social problems. We're looking at them through a different lens now, and we’re asking ourselves not just, “How do we solve this very tactical problem?” but also, “How do we look at systems?” And I think this especially lends itself diverse points of view because having people from different walks of life bringing in ideas for solving problems is going to be what makes our problem-solving efforts more effective.

What are some of the areas that you think we still have the most work yet to do to improve on?

I think climate is going to be an incredibly important thing in the next couple of decades, because it will make or break the planet itself. It is the biggest challenge we face as a society, and I think Duke’s Design Climate Initiative, and the investment in engineering as a solution to problems that seem insurmountable, are going to be very important.

I think the other thing that's really important is, how do we actually help people see what’s possible with humanity working together? If you look at the greatest feats of engineering in the world—if you look at the pyramids, the Great Wall of China, these incredible cathedrals built with almost bare hands—you think of how engineering has helped us create such monuments to human ingenuity and greatness. That is just such a powerful message: that we can solve almost any problem if we really put our minds and our collective efforts into it.