Precisely planting electrodes in the most delicate regions of a patient’s brain to still the tremors of Parkinson’s. Compressing images taken by rovers on Mars to speed them down to earth. Tracing the outer contours of the flu virus to find new footholds for vaccines. Changing the background in a home video or translating black-and-white film to color with speed and ease. 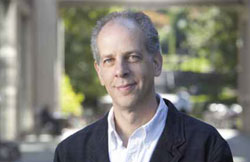 It’s hard to believe that such a variety of advances could come from one researcher, but for Guillermo Sapiro that’s just the start. The maestro of image processing develops algorithms that interpret vast numbers of pixels from photos or video and translate the findings into breathtaking array of practical solutions—from medical breakthroughs to new crowd-surveillance methods to improvements in consumer products such as Adobe’s After Effects software.

Recently arrived at Duke from the University of Minnesota, Sapiro is particularly excited by the new directions his work is taking in this highly interdisciplinary environment. “At Duke it’s hard to understand which departments people are in—and that’s a positive thing,” he said. “Most of us have multiple appointments, so there are no boundaries.”

Among his new collaborators is Duke child psychiatrist and epidemiologist Helen Egger, with whom he’s starting a project to improve early diagnosis of childhood anxiety and other disorders. The effort builds on Sapiro’s earlier work using techniques that automatically pick up on abnormal activity on videos to detect early signs of autism.

While a clinician or daycare provider might not always recognize a brief but significant delay in a toddler’s eye movement, say, or a lack of eye contact, video analysis could potentially raise the red flag automatically—enabling earlier diagnosis and intervention.

Now Egger and Sapiro will mine information from thousands of hours’ worth of video, parent interviews, and clinical data to see if they can automate recognition of anxiety symptoms. “If we can find patterns in the data that point to just a few simple tests or questions that truly indicate a problem, that would be a tremendous tool for clinicians,” he said.

“It’s an exciting project because the contribution to society could be huge,” Sapiro said.