We’ve all seen dewdrops form on spider webs. But what if they flung themselves off of the strands instead?

Researchers at Duke University and the University of British Columbia have now observed this peculiar phenomenon, which could benefit many industrial applications. As long as the strands are moderately hydrophobic and relatively thin, small droplets combining into one are apt to dance themselves right off of the tightrope. The discovery could form the basis of new coalescer technologies for water purification, oil refining and more.

The findings were reported online on August 14, 2015, in Physical Review Letters.

“We were studying how insect wings with a hairy structure clean themselves, and an undergrad Adam Williams saw two droplets merge and suddenly leave a strand of hair,” said Chuan-Hua Chen, associate professor of mechanical engineering and materials science at Duke. “Since we couldn’t easily reproduce the effect, we thought it was just an artifact, perhaps due to the slight breeze created by the humidifier in the experiment.”

But thanks to some ingenuity from Kungang Zhang, a graduate student in Chen’s group, they discovered that the “dancing droplets” are real, and are more likely to propel themselves off of a strand if they merge from opposite sides -- a finding that allowed the team to study the phenomenon in detail.

As a droplet grows larger, it stores energy on its expanding surface. When two droplets merge, the mass stays the same, but the surface area decreases. This causes a small amount of energy to be released. As long as the drops are only attached to a small solid area, the released energy is enough to fling them away. This proves true so long as the strand is reasonably hydrophobic, such as the Teflon-coated fibers in the experiment, and the diameter of the strand is a few times smaller than that of the droplet. 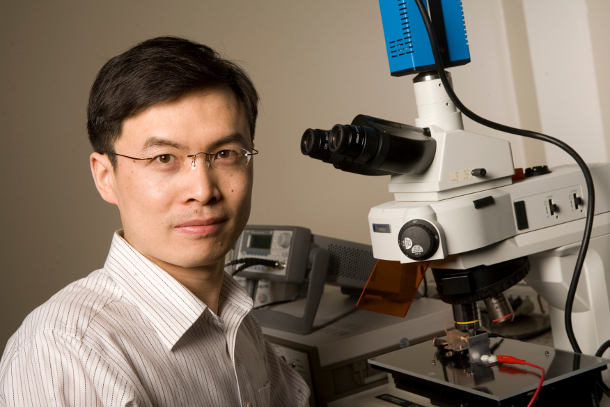 In previous research, Chen and his team showed a similar self-cleaning method from the wings of cicadas where droplets could launch themselves from a flat surface. That surface, however, was super-hydrophobic due to the nanostructure of the wings.

“In engineering systems, these nanostructures are concerns for reliability,” said Chen. “Our new finding provides a solution without resorting to these super-hydrophobic surfaces.”

A potential application of the dancing phenomenon is in water purification technologies. Current methods use gravity or shearing forces to remove accumulated droplets from fibrous webs, much like those found on your morning walk through the woods. If the droplets get too large, however, they can clog the gaps in the web. But with this new finding, fibrous woven materials could be engineered with Teflon-like coatings and large enough gaps to never clog before droplets jump off.

“Before we demonstrated this, people thought you’d never be able to get the self-propelled phenomenon on a moderately hydrophobic surface,” said Chen. “But now we’ve shown that you don’t need super-hydrophobicity to get this dancing effect. All you need are round fibers instead of flat surfaces.”

This work was supported by the National Science Foundation.