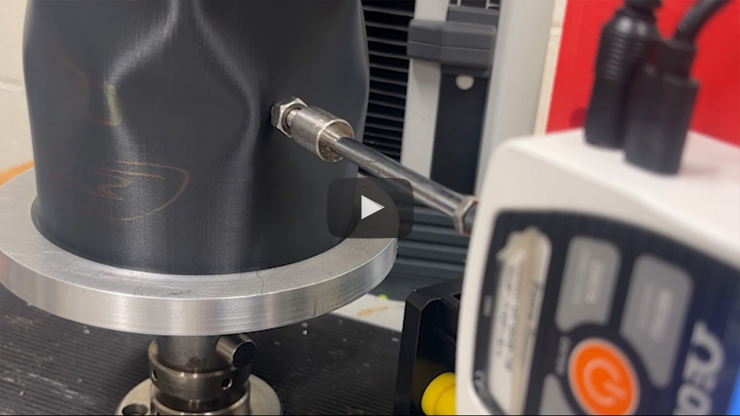 Students walking through the basement corridors of Hudson Hall are accustomed to strange noises. Besides the various laboratories and classrooms dotting the architecture, the classic red brick hallmark of Duke Engineering was originally constructed in 1948 and has a living, breathing soundtrack all its own.

But anybody would still be forgiven for jumping at the sudden bangs consistently ringing through the hallways on the north side of the basement for the past year. Reminiscent of a balloon popping or a capped soda bottle getting run over by a car, the sudden and unexpected auditory assault made by plastic thin-walled cylinders getting crushed over and over has been a consistent hallmark of Sage Cooley’s research.

A sophomore majoring in mechanical engineering, Cooley sought out research opportunities in areas pertaining to the aerospace industry during her first year on campus. That search led her to Lawrie Virgin, professor of mechanical engineering and materials science, whose research broadly focuses on studying the behavior of nonlinear dynamical systems. He suggested, among other options, a research project investigating the use of 3D printing in characterizing the behavior of thin-walled cylinders.

More than a year later, that suggestion culminated with Cooley successfully getting a research paper accepted for publication by the Philosophical Transactions of the Royal Society of London—the world’s oldest scientific journal, where Sir Isaac Newton published his first paper in 1672.

“Thin-walled cylinders are simple and commonplace in terms of geometry, but they’re hard to model,” said Cooley. “If you think of a grain silo, you’ll get a general idea of the shape. There’s a lot of industries interested in learning more about their mechanics and behavior, but the easiest to understand is probably NASA. All of their fuel tanks are essentially thin-walled cylinders, and they want them to be strong and stable but as thin and light as possible.”

Historically, the mechanics of these shapes have been studied by cutting the ends off of mass-produced soda cans or wrapping a thin sheet of metal around a cylinder and soldering the ends together. But both approaches are time-consuming and can introduce inconsistencies into the cylinders, and there’s nothing researchers hate more than uncontrollable inconsistencies.

“This experience has been really helpful for me to understand how to be more resourceful. I didn’t come into it with any special skills, I had to acquire them, and I had to ask for a lot of help along the way."

Virgin’s idea was to see if the growing availability of 3D printers might be able to help push the field forward. Given a few printers and a bit of plastic printing material, researchers could create an endless supply of identical cylinders to gather data from. They could also introduce small irregularities to the designs to test common damages or new designs.

For the past year, Cooley has been putting this idea to the test, routinely printing new cylinders and slowly crushing them between two metal plates to record their reactions and buckling thresholds.

“They’re perfectly happy until they suddenly blow in a catastrophic failure,” Cooley said. “There’s no warping or advance warning. They just make a loud popping noise in an instant and buckle into a wave-like pattern.”

“They’re perfectly happy until they suddenly blow in a catastrophic failure."

Because the thin plastic is so flexible, the cylinders can then return to their original shape once the pressure is removed from their ends with little damage. The flexibility also allowed Cooley to conduct novel experiments on their stability by slowly poking the dimpled sides of warped cylinders until their wavy shape realigned into a new pattern.

“This experience has been really helpful for me to understand how to be more resourceful. I didn’t come into it with any special skills, I had to acquire them, and I had to ask for a lot of help along the way,” Cooley said. “But publishing as a sophomore I would say was kind of a distant dream, so seeing the entire project progress has been really awesome.”