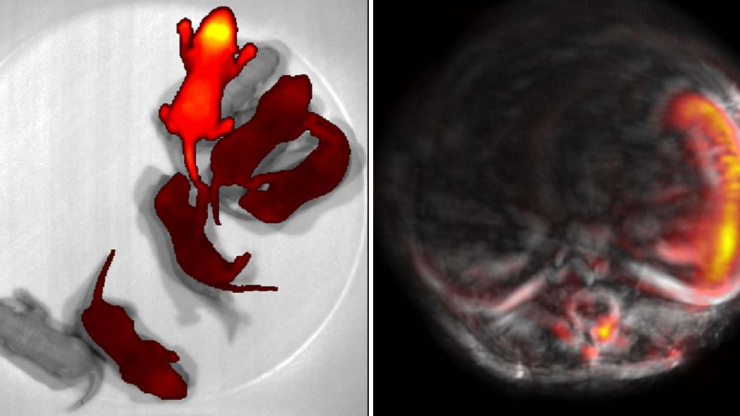 Biomedical and genetic engineers at Duke University and the Albert Einstein College of Medicine have developed a process to change the color of a mouse’s tissue in imaging to better visualize its internal physiology.

The approach will help researchers isolate and remove sources of strong background noise in biomedical images, giving them unprecedented access to observe, influence and image biological processes with a swiftly developing imaging technique called photoacoustic imaging. The research appeared May 19 in the journal Nature Communications.

As its name suggests, photoacoustic imaging (PA) uses both light and sound to capture detailed images of cells, organs and other tissues throughout the body. The imaging process sends a burst of laser light deep into tissue, causing cells to heat up and expand instantaneously. This creates an ultrasonic wave that provides information about the structure and composition of the targeted tissues and cells that can be translated into high-resolution images.

But while the ultrasound component of photoacoustic imaging allows engineers to peer deeper into tissue than traditional imaging, it also introduces a problem: background noise.

“If we want to image something like how a tumor is growing or shrinking, we have a hard time seeing anything significant because the background ultrasound signals from flowing blood drowns everything out,” said Junjie Yao, assistant professor of biomedical engineering at Duke. “It’s like trying to observe the stars in daylight –– the light from the sun overpowers all other sources of light.”

The new genetically engineered mouse model, developed by Yao and Vladislav Verkhusha, professor of genetics at Einstein, gives researchers an efficient way to isolate and remove this background noise.

To accomplish this, Verkhusha and his team introduced a specialized, light-sensitive photoreceptor into the cells of their mouse model, called BphP1. Normally found in bacteria, BphP1 is often used as a light-based research tool because it can switch between a silent and active state when it is hit with a specific wavelength of light. These light-sensitive proteins are useful for photoacoustic imaging because they can bond especially well with biliverdin, a molecule that appears in high quantities in tissues but rarely appears in blood cells.

Once these proteins were genetically introduced to their mouse model, the team illuminated the entire animal with a specific wavelength of red light. This burst of light activated the Bph1, causing the mouse to change colors. Next, they shined a wavelength of near-infrared light on the mouse, causing the BphP1 to return to its silent state. Although the change in color isn’t visible to the naked eye, it could be observed using photoacoustic imaging.

“The blood doesn’t express this color-changing ability, so when we switch the animals back and forth between the two colors, we know that the background noise from the blood won’t change,” said Yao. “Suddenly the noise becomes a constant component of the image, and we can use a simple data processing method to remove it. This process made our imaging system orders of magnitude more sensitive.”

As a proof of concept, the team imaged the liver, stomach, spleen and intestine to show how different organs in the model expressed the photoreceptor. They saw that while all organs appeared more clearly than with standard PA, the spleen and liver were especially precise, as they had naturally higher levels of the biliverdin molecule for the BphP1 to bind to. This improved detail enabled the team to monitor changes, like liver regeneration, more precisely, and to track the efficacy of different protein delivery methods.

The new technique also allowed the team to better study pregnancy in their mice, as BphP1 could bind directly to the embryos. The team was able to use PA to precisely identify seven embryos from the surrounding vasculature and maternal organs.

Yao and Verkhusha are looking forward to expanding the uses of their mouse model. One avenue of exploration involves studying the immune response to cancer therapies. Yao hypothesizes that they could add BphP1 to cancer cells or immune cells and observe their migration through the body and their response to treatment.

Outside of imaging, Verkhusha and his team will continue to explore how their model could contribute to optogenetic research, which involves using light to control cell activity.

“To me, this project was a good marriage between biochemistry and imaging,” said Yao. “The idea of a color-changing mouse is really exciting on its own, but I’m optimistic we can use this mouse to do some magic.”