From the newsletter of the Fitzpatrick Institute for Photonics, Broadband

In a building full of advanced photonics research, the laboratory of Jungsang Kim just might have the most complicated optical setups. After all, not many engineering challenges involve controlling the frequency of a laser to within a millionth of a percent.

But building the world’s first quantum computer does.

This is the next big goal for Kim, a professor of electrical and computer engineering at Duke University.  And he’s not too far from achieving it.

“Back in the 1940s, researchers were just discovering how to use vacuum tubes as simple switches,” explained Kim. “These switches could then form logic gates, which could be linked together to form the first logic circuits. That’s where we’re at now with quantum processors. We have verified that all the components work. The next step is to engineer the smallest, yet most interesting circuit possible.”

According to David DiVincenzo, a prominent computer scientist at IBM, researchers must meet five criteria to create a true quantum computing device.

First, Kim needs a well-defined system that can represent different states. For example, classical computers use small electrical switches made out of semiconductors to indicate a 1 or a 0. But because an atom’s quantum spin can point in an infinite number of directions, controlling its state with a high degree of reliability is very difficult. Kim’s group has demonstrated this feat with an accuracy on par with anyone in the world.

Once an atom’s quantum state can be controlled, the system must be made quantum-mechanically coherent. If the atom interacts with the outside world even a little bit, it loses its “quantumness,” which is bad. Again, Kim’s laboratory has demonstrated this ability.

They have also demonstrated the ability to initialize their system to a well-defined starting state. For example, in a laptop, each bit starts in the same place – a zero – until data is written to the chip.

Fourth, a quantum processor needs enough components to produce a universal set of gates, which allows one to implement arbitrary computational tasks. Kim’s setup combines a simple two-quantum-bit gate with the ability to control each quantum bit’s state to accomplish that.

Last but not least, a quantum computer needs to have the ability to report its solution. To do that, there must be good quantum measurements, which again, Kim’s laboratory has already demonstrated.

“All of these criteria our system meets pretty much as well as anybody else’s can,” said Kim. “But those are just the components. If you want to build a computer, you have to put a large number of these things together in a way that you can control them and interact with them at will. And that system integration is something that we are currently working on.” 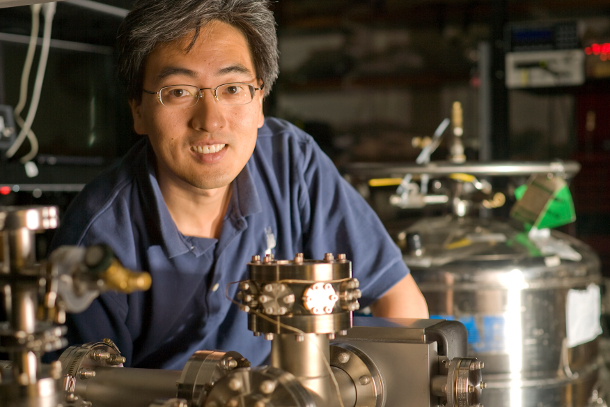 After scientists in the 1940s put together the first string of vacuum tubes, it wasn’t long before they filled rooms with tens of thousands of them to create the first digital computer. Kim hopes to demonstrate the first small string of “quantum vacuum tubes” within a year. After that, it will be up to the cutting-edge technologies developed for semiconductors and telecommunications to scale the system up.

“We do all of these quantum manipulations with atomic ions trapped on silicon chips, so we could actually start to think about systems where we have 100 atomic ions,” said Kim. “That’s a small processor, but we have ways of connecting multiple units to build large-scale systems. The result would be similar to data processing centers with thousands of processors linked together.”

“The challenge is getting today’s telecommunications technologies to work with our quantum systems, because they operate on different wavelengths,” Kim added. “I think we’re getting close. And if successful, not only could we make scalable quantum computing clusters, but also quantum networks that communicate over long distances.”