BME's Isaac Hilton received a CPRIT grant to study innovative cancer research in his own lab at Rice University. 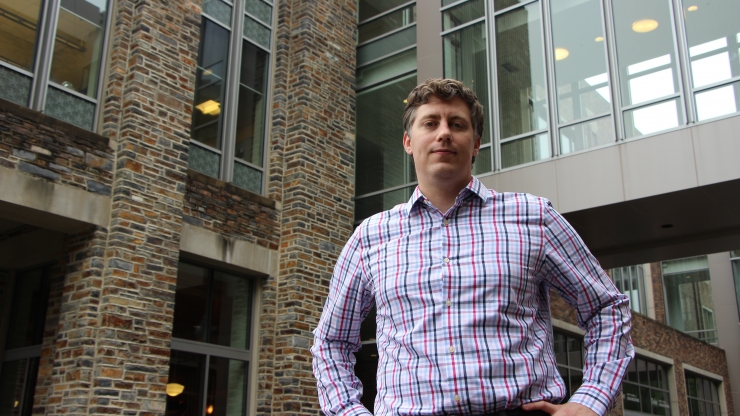 Isaac Hilton, a postdoctoral fellow in Duke University's Department of Biomedical Engineering (BME), recently received a grant to participate in the Cancer Prevention and Research Institute of Texas (CPRIT). As a CPRIT Scholar in Cancer Research, Hilton will work as an assistant professor of bioengineering at Rice University, where he will receive $2 million in CPRIT start-up funds to work on innovative cancer research.

“This is a unique opportunity, because the funding was approved by Texas voters with the ultimate goal of changing and improving how we detect and treat cancer,” says Hilton. “This particular award is geared towards recruiting cancer researchers who are seeking their first tenure-track appointment to Texas. This strategy is designed to position Texas as a leader in the fight against cancer well into the foreseeable future."

The CPRIT program began in 2007 after Texas voters passed a constitutional amendment authorizing the state to issue $3 billion in bonds to fund cancer research. The initiative aims to recruit experienced researchers with a background in cancer who are then encouraged to study forms of cancer that are especially problematic for Texas healthcare, such as lung cancer and breast cancer.

Hilton, who earned his PhD in genetics and molecular biology from the University of North Carolina at Chapel Hill, has worked as a postdoctoral fellow in BME’s Charlie Gersbach’s lab since November 2013. During his time at Duke, he used epigenomic editing tools based on CRISPR-Cas9 to study the role that biochemical modifications play in controlling the expression of human genes.

“Isaac’s work has been at the leading edge of the new field of epigenome editing,” says Gersbach. “It’s very encouraging to see the CPRIT program recognize the potential of Isaac’s work to have a transformative effect on cancer research and treatment.”

Now, Hilton will bring his experience with cancer research and epigenome editing to his own lab at Rice, where he is planning to study the role of epigenetic modifications in regions of the genome that we suspect are associated with cancer onset and progression. “Emerging genome editing technologies provide us with the opportunity to address questions about cancer that we have been attempting to answer for decades,” he said.

“This highly competitive award is not only a recognition of Isaac’s research accomplishments, but it also attests to the world-class research that is going on in Duke BME labs,” says Ashutosh Chilkoti, chair of the BME department.

Although Hilton looks forward to the new opportunities available to him, he is grateful for his time at Duke. “Charlie has been an amazing mentor to me, and his guidance is always insightful and helpful,” he says. “The breadth of pioneering work that I have learned about during my time in Duke BME has helped to broaden my expertise.”