Big Ideas on a Small Surface 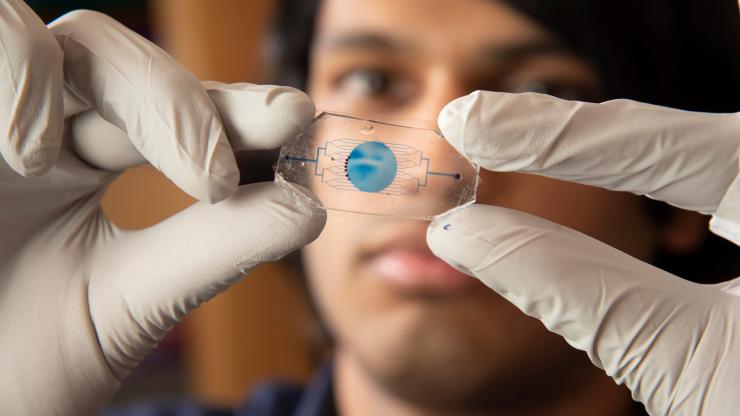 Several small slides sit in an incubator in Shyni Varghese’s lab at Duke University, where they are connected to an assortment of machines via a network of delicate clear tubes. Roughly the size of viewing slides used in microscopes, these slides are actually microfluidic chips that house living samples of cells and tissues.

Varghese, a professor of biomedical engineering at Duke University, uses this lab-on-a-chip technology to create miniature models of tissues, organs and even tumors.

One of the major challenges in studying disease and developing therapies involves the different responses each provoke in different organs and tissues in the body. Cells in the liver will react differently to disease or various pharmaceuticals than cells in the heart, and drug reactions and disease symptoms can also be inconsistent from person to person. Using animal models or  petri-dish studies with human cells to understand these responses has proven less than perfect. 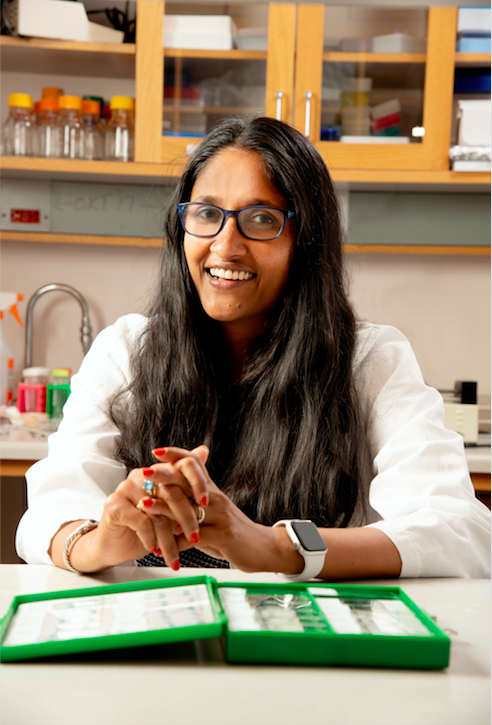 The Varghese lab’s chips help address this shortcoming by allowing the researchers to mimic the disease conditions similar to that in the human body.

“Our work tries to capture the architecture of the microenvironment of the organ within the device, so the cells are arranged the same way they’d be arranged inside the organ, and they’re subject to the same mechanical forces that are in the body,” says Vardhman Kumar, a PhD student in the lab who specializes in the technology. “You can make individual organ-on-a-chip models using cells from the gut, the skin, or even cells from the eye. Anything you can think of in the body can be engineered and assembled on a chip.”

Previously, the Varghese lab developed models for the heart and liver, but they’ve since turned their attention to other systems, including musculoskeletal tissues. To model this system, they created a knee joint which, Kumar says, will allow them to examine how biomechanics and inflammation affect joint function and health.

The team has also expanded their platform to study the lungs, creating a tissue model that can pulsate to mimic how the lungs expand and contract as humans inhale and exhale. In addition to enabling them to study various physiochemical cues in normal lung development, this model allows the researchers to recapitulate different aspects of lung diseases.

“With the lung chips, for example, we’ll be able to mimic coughing and other behavior that’s associated with idiopathic pulmonary fibrosis, a lung disease that causes scarring and difficulty breathing,” says Varghese, a Duke MEDx investigator who also holds joint appointments in mechanical engineering and materials science and in orthopaedic surgery at the Duke University School of Medicine.

A larger focus for the lab, she adds, is figuring out how to integrate these individual systems for a body-on-a-chip platform. “We want to use this platform to test for cross-talk between different organs at the same time, which is more realistic than studying these organs in isolation,” Varghese says.

For example, her lab is developing “tumor on-a-chip systems” to examine the role of the cancer microenvironment on disease progression and diagnosis. Not only can the researchers test the efficacy of various drugs and immunotherapies on the tumor itself, they can also study how the drugs affect the entire body by connecting the tumor chips to the body-on-a-chip network.

“We’re trying to integrate these small-scale but very robust human-specific models to look at how immune cells can be recruited to a tumor site and to understand the role of the cellular environment on cancer spread  and growth,” says Varghese. “Our goal is to use this system to address large biological questions and ultimately identify new therapeutic targets.”

A couple of buildings down from the Varghese lab, George Truskey, the R. Eugene and Susie E. Goodson Professor of Biomedical Engineering at Duke, is using his own version of a lab-on-achip platform to study how physical forces affect the function of blood vessels and skeletal muscle.  These sophisticated chips contain a central well for tissue samples, and channels that can pump nutrients and other materials into the tissue and create blood flow, mimicking its natural environment.

Truskey and his lab initially developed the chips to model human blood vessels so they could study cellular response to various drugs. Now, the lab has zeroed in on how they can use these models to study the connection between cardiovascular and autoimmune diseases. 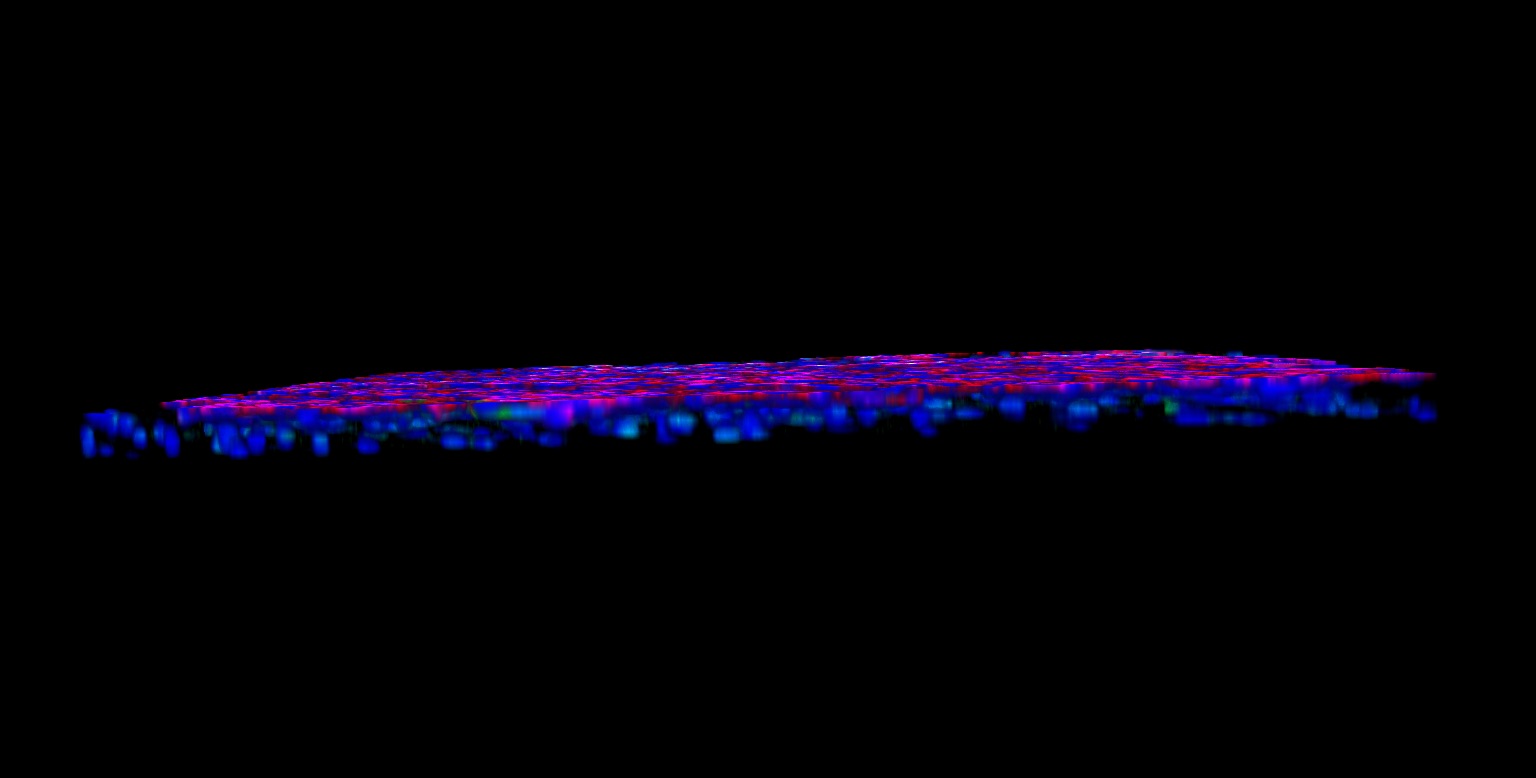 Earlier this year, the World Health Organization reported that cardiovascular disease is the leading cause of death worldwide, with nearly half of all Americans suffering from the disorder.

“When some individuals have a disease that causes inflammation, like lupus, rheumatoid arthritis or Crohn’s disease, they also have a higher risk of developing cardiovascular disease,” says Truskey. “Everyone knows that high levels of cholesterol can put you at risk for developing cardiovascular disease, but we want to explore the role of inflammation.”

Toward that end, Truskey and his lab have created blood vessel models that mimic the early stages of atherosclerosis, a cardiovascular condition in which fats and other substances build up along the walls of blood vessels, making them thick and stiff. The team plans to combine these models with their skeletal muscle models of rheumatoid arthritis.

“This linkage would resemble what occurs physiologically in the bloodstream,” says Truskey. “Our rheumatoid arthritis model would essentially serve as a reservoir for inflammation, and we’re curious if linking it with our blood vessel model would exacerbate the symptoms of cardiovascular disease. The goal would be to identify some novel biomarkers that may be helpful in assessing how inflammation influences cardiovascular disease.”

The lab has also employed tissue chips to study rare diseases, like Hutchinson-Gilford Progeria Syndrome. Known as progeria, the disease causes symptoms that resemble accelerated aging in children; patients typically die of heart disease or stroke, caused by weakened blood vessels, by the age of 14. There are less than 250 known cases worldwide.

“This disease is so rare and deadly that it’s challenging to run clinical trials with compounds that may help alleviate symptoms associated with the disease or provide some sort of treatment,” says Truskey. “But that’s where our blood vessel models prove to be very helpful.”

Using induced pluripotent stem cells from patients with progeria, the team was able to grow engineered blood vessels that displayed many of the symptoms seen in people with the disease. This new model allowed them to test a variety of pharmaceuticals, revealing more about the efficacy of various therapies.

After finding success with disease models, the Truskey lab has also started using their tissue chips to study the human placental barrier in collaboration with Liping Feng, MD, an assistant professor of obstetrics and gynecology in the Duke University School of Medicine.

The placenta is created in the uterus during pregnancy, where it helps provide oxygen and nutrients  to the fetus. Many of the complications that occur during pregnancy, such as pre-eclampsia, are linked with irregular placenta development. But researchers have long struggled to study these complications and address larger questions about pregnancy because they’ve lacked an effective research model for the human placenta.

Using a synthetic membrane interspersed with cells from human placenta cells, the team was able to create a model that could mimic the blood flow through a placenta. Although the work is still in its early stages, Truskey and his collaborators hope to use their organ-on-a-chip to better understand how viruses, drugs and other molecules travel from the mother to the fetus.

“This technology has advanced to the point where you can create many of the key features of tissues and organs in the lab, and that opens a lot of possibilities—not just to understand normal function, but to model diseases,” says Truskey. “In the end we hope that it will help speed up and improve the drug development process if you show that these can be used as efficient models.” 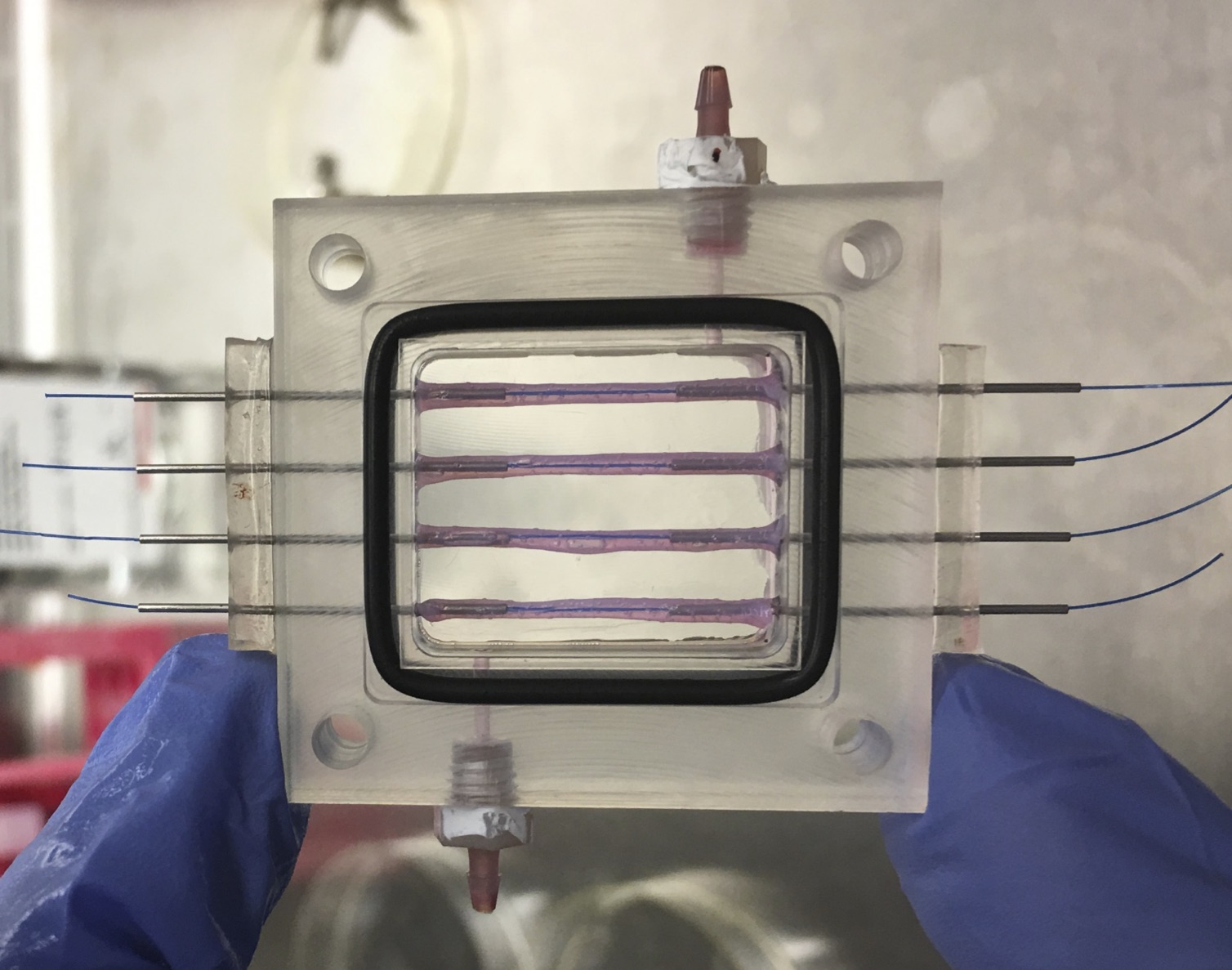