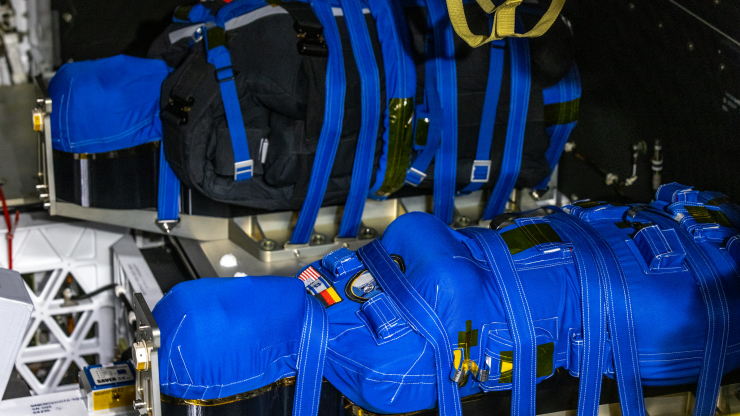 When NASA’s Artemis I mission launches later this year, its crew will include Helga and Zohar, two manikin models designed in collaboration with Duke University.

These models, called ‘phantoms’, are made of materials that mimic human bones, soft tissue and organs, and they’ll be fitted with sensors that will measure radiation exposure as they travel to the moon and back. Paul Segars and Ehsan Samei, both researchers at the Carl E. Ravin Advanced Imaging Laboratories at the Duke University School of Medicine, helped develop these phantoms using methods originally created to study how different medical procedures, tools and techniques precisely affect organs throughout the human body.

“What’s important when calculating risk to a patient—or to an astronaut—is how much dose is received to individual organs such as the brain, heart, liver and kidneys.”

“Usually these ‘phantoms’ are virtual, and we use them to create avatars of patients. The goal of our work is that instead of conducting a clinical trial on human patients, you can use these avatars and run a simulated clinical trial through a computer,” explains Samei, the Reed and Martha Rice Distinguished Professor of Radiology. “With this project, we’ve made these virtual avatars into physical models to study radiation specifically, and this is the first time they’ll be sent around the moon.”

People on earth are shielded from cosmic radiation by Earth’s atmosphere, but when astronauts travel through space, they enjoy no such protection. Understanding how to mitigate the harmful effects of these cosmic rays is one of the major hurdles for deep space travel to places like Mars, where astronauts would be exposed to radiation for up to 36 months.

“What’s important when calculating risk to a patient or to an astronaut is not how much total radiation dose is received, but how much dose is received to individual organs such as the brain, heart, liver and kidneys,” said Samei. “Each organ has a different sensitivity to radiation, and our phantoms are providing a way for us to understand that risk better.”

For the project, called the Matroshka AstroRad Radiation Experiment, or MARE, Segars and Samei collaborated with researchers at NASA, the German Aerospace Center, the Israeli Space Agency and CIRS to develop Helga and Zohar. The Duke researchers developed a computational algorithm to create a map of the interior anatomy of the phantoms, which was then used as a guide to precisely place thousands of radiation sensors.

Both the Helga and Zohar phantoms resemble human torsos, and they contain materials to specifically mimic the adult female anatomy, as female organs like the uterus and breast tissue are especially sensitive to radiation. When Artemis I launches, Helga will be wearing normal clothes, while Zohar will be fitted with a radiation vest, called AstroRad, which was developed by StemRad and Lockheed Martin.

“The study will provide valuable data on radiation levels astronauts may encounter on lunar missions and evaluate the effectiveness of the protective vest that could allow the crew to stay in the storm shelter and continue working on critical mission activities in spite of a solar storm,” NASA said in a description of MARE.

Once their phantoms return to Earth, the research team will measure the radiation collected in the sensors to determine the effectiveness of the safety vest. They’ll also use the data from Helga to specifically calculate the level of radiation that astronauts may face during different space missions, whether it’s a short trip to the moon or an adventure to Mars.

“This is the first time anyone has been able to measure radiation levels astronauts face,” said Samei. “Artemis I will be carrying precious cargo, and the information we get from this crew will give us valuable information we need for the future of safe space exploration.”