Customizable to individual patients and requiring less than 10 minutes to prepare and use, new surgical implant coating prevented 100% of infections in mice 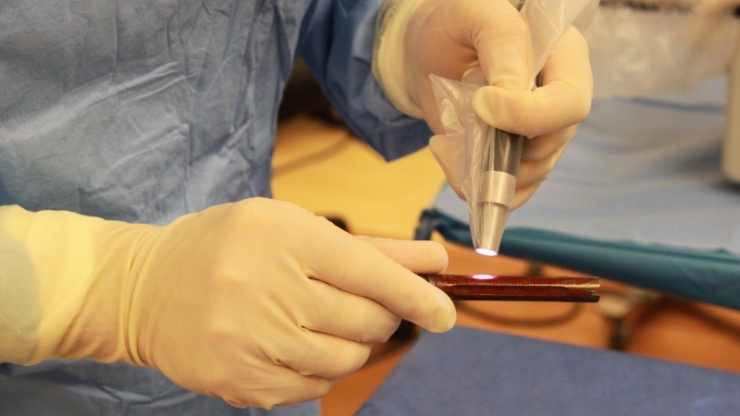 Biomedical engineers and surgeons at Duke University and UCLA have demonstrated an antibiotic coating that can be applied to orthopedic implants minutes before surgery that eliminates the chances of an infection around the implant.

In early trials in mice, the coating prevented all subsequent infections, even without infusions of antibiotics into the bloodstream, which is the current standard of care. After 20 days, the coating did not reduce the bone’s ability to fuse with the implant and was completely absorbed by the body.

The results appear online September 16 in the journal Nature Communications.

The project began when Tatiana Segura, professor of biomedical engineering at Duke, met Nicholas Bernthal, interim chair and executive medical director at the David Geffen School of Medicine at UCLA, who specializes in pediatric orthopedic oncology and surgery. He told Segura that many children being treated for bone cancer have large portions of bone removed, which then requires orthopedic implants. But because the patients are usually also undergoing chemotherapy, their immune systems are weak and they are especially vulnerable to bacteria colonizing the surface of the implant.

“These kids face the choice of having chemotherapy versus saving their limb or even sometimes needing amputations to survive, which sounds horrific to me,” Segura said. “All they really need is something to rub on the implant to stop an infection from taking hold, because preventing an infection is much easier than treating one. So we came up with this coating technology that we hope will provide a solution.”

Implant infections aren’t unique to children or to cancer patients, however. For joint replacement surgeries, for example, infection occurs in 1% of primary and up to 7% of revision surgeries, which requires repeated revision surgeries and prolonged intravenous antibiotics. Treatment doesn’t always work, however, as these patients have a higher five-year mortality risk than those diagnosed with HIV/AIDS or breast cancer. Implant infections are estimated to cost the health care system more than $8.6 billion annually in the U.S. alone. 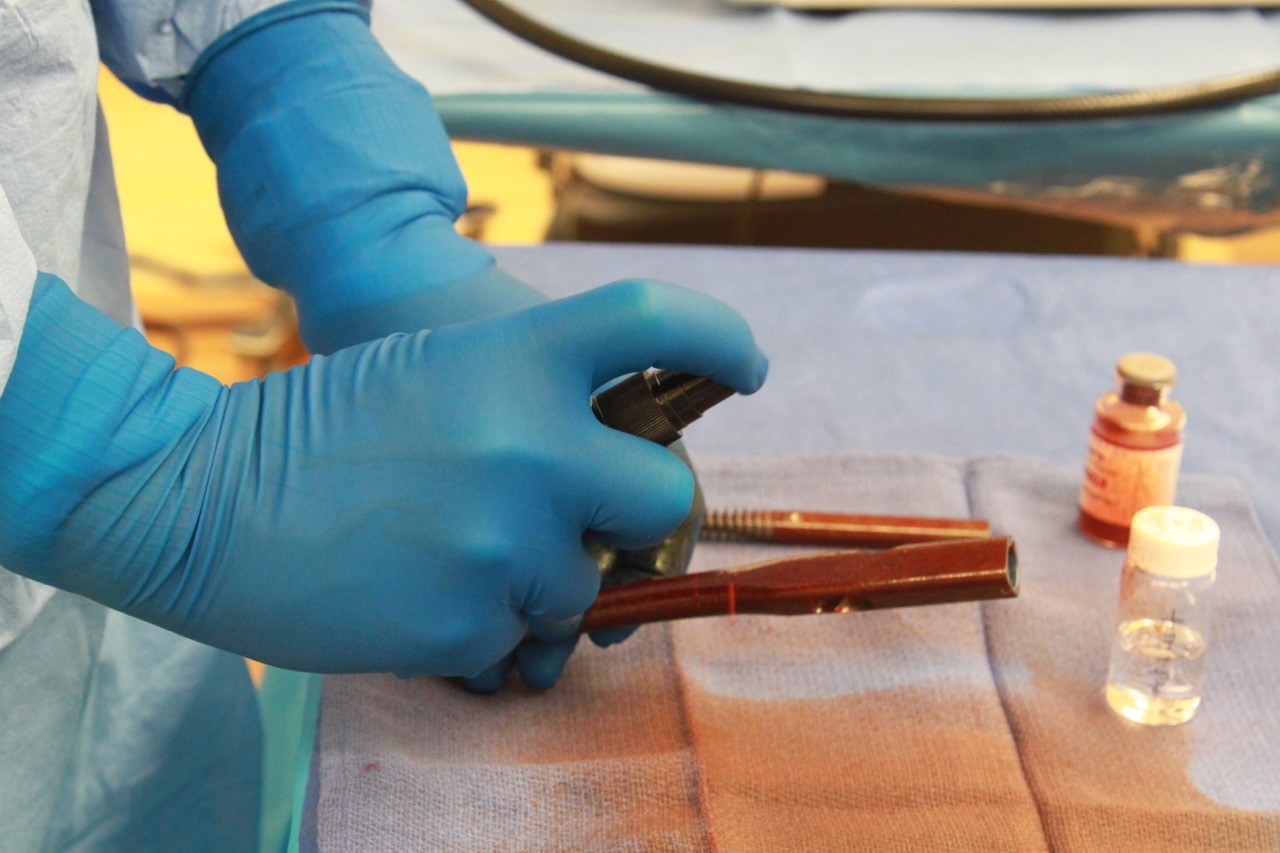 Part of the challenge of treating these infections is that bacteria colonize the surface of the implants themselves. This means that there are no blood vessels flowing through the bacterial colonies to deliver the antibiotics coursing through a patient’s veins. The only recourse is often the removal of the original implant, which is usually the best of what are only bad options.

Some doctors have taken to their own solutions, such as using antibiotic powder when closing the surgical wound or infusing the bone cement used to hold the implant in place with antibiotics. Neither of these tactics have been proven to be clinically effective. There is also the option of implant manufacturers adding antibiotic properties to their devices. But this would greatly reduce the product’s shelf life and also require a long and complicated process of FDA approval, since the implants would then be in a new classification.

Segura’s new antibiotic coating sidesteps all of these challenges.

“We’ve shown that a point-of-care, antibiotic-releasing coating protects implants from bacterial challenge, and can be quickly and safely applied in the operating room without the need to modify existing implants,” said Christopher Hart, a resident physician in UCLA Orthopaedic Surgery who helped conduct the experiments.

The new antimicrobial coating is made of two polymers, one that repels water and one that mixes well with water. Both are combined in a solution with an antibiotic of the physician’s choosing and then applied directly to the orthopedic implant by dipping, painting or spraying. When exposed to a bright ultraviolet light, the two polymers couple together and self-assemble into a grid-like structure that traps the antibiotics.

The reaction is an example of “click chemistry,” which is a general way of describing reactions that happen quickly at room temperature, produce only a single reaction product, have an extremely high yield and occur within a single container. 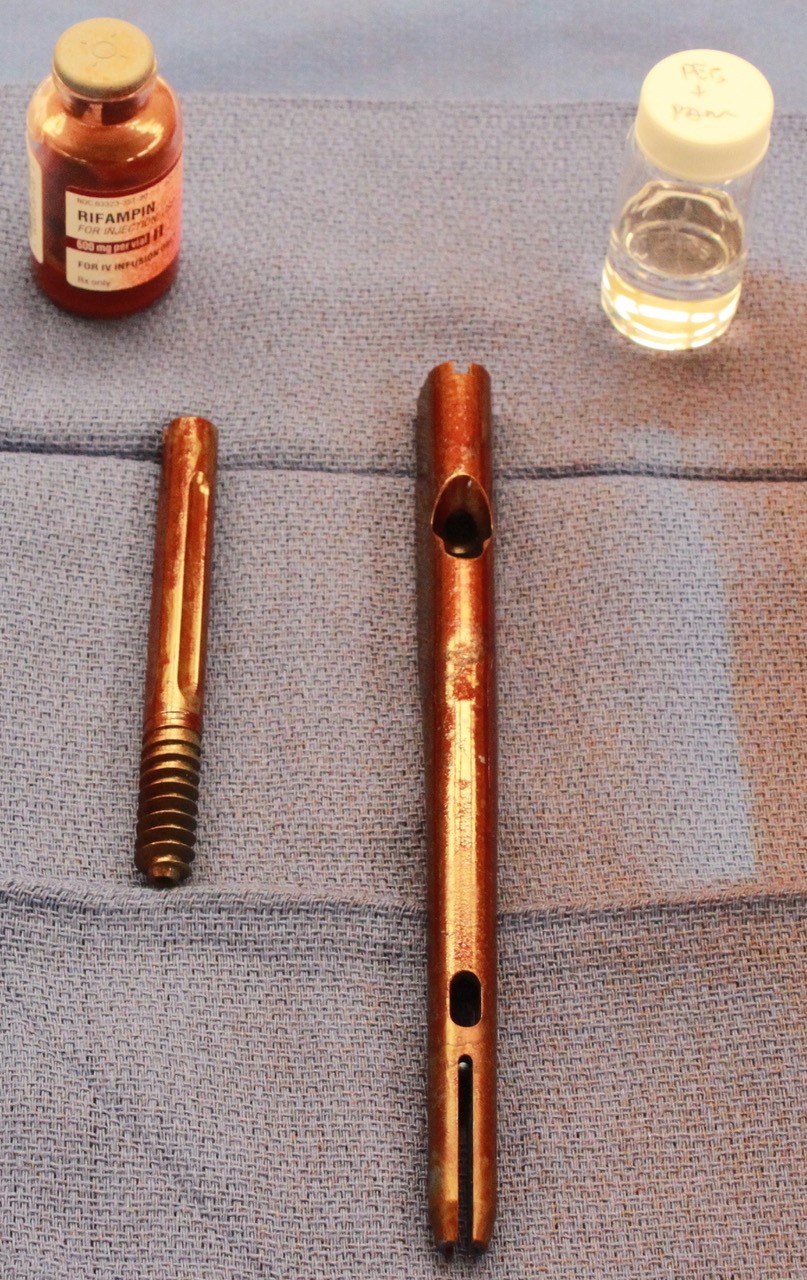 "This study is a great example of the power of click chemistry in biomedical applications,” said Weixian Xi, now a senior scientist at Illumina who was a postdoctoral researcher at UCLA during the study. “This ‘smart’ and ‘clickable’ polymeric coating enables protections of implants from bacterial infection and makes a personalized approach possible."

“Our coating can be personalizable because it can use almost any antibiotic,” Segura continued. “The antibiotic can be chosen by the physician based on where in the body the device is being implanted and what pathogens are common in whatever part of the world the surgery is taking place.”

The click chemistry polymer grid also has an affinity for metal. Tests involving various types of implants showed that the coating was very difficult to rub off during surgical procedures. Once inside the body, however, the conditions cause the polymer to degrade, slowly releasing the antibiotics over the course of two to three weeks.

In the study, researchers rigorously tested the coating in mice with either leg or spine implants. After 20 days, the coating did not inhibit the bone’s growth into the implant and prevented 100% of infections. This time period, the researchers say, is long enough to prevent the vast majority of these types of infections from occurring.

The researchers have not yet tested their coating on larger animals. Since larger animals—such as humans—have larger bones and need larger implants, there is much more surface area to protect against bacterial infections. But the researchers are confident that their invention is up to the task and plan to pursue the steps needed to commercialize the product.

“We believe this transdisciplinary work represents the future of surgical implants, providing a point of application coating that transforms the implant from a hotspot for infection into a ‘smart’ antimicrobial therapeutic,” Bernthal said. “You only need to treat a single patient with an infected implant to realize how transformational this could be for patient care —saving both life and limbs for many.”