Formed in 2004, Bioptigen has become a leader in optical coherence tomography (OCT), an imaging technique that uses light to capture extremely high-resolution, three-dimensional pictures of the eye. 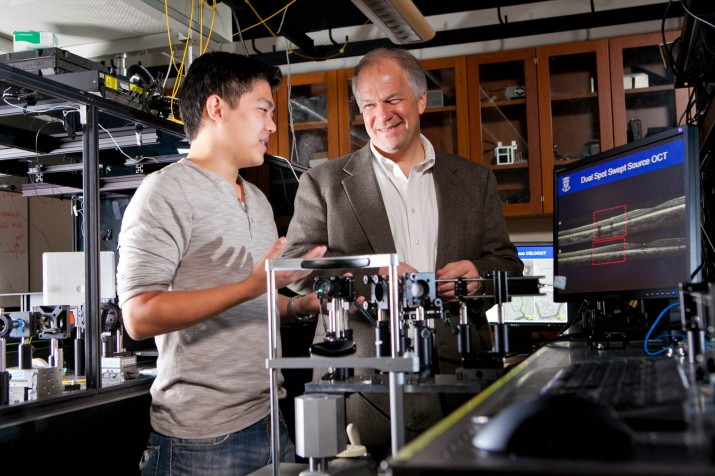 Bioptigen was the brainchild of Duke’s Michael J. Fitzpatrick Professor of Engineering Joseph Izatt, Ph.D., and CEO Eric Buckland, Ph.D. Since its launch, the company secured more than 60 issued patents in OCT technology, many of which were licensed from intellectual property developed by Izatt, his students, and collaborators at Duke and Case Western Reserve University.

The Duke Innovation & Entrepreneurship Initiative spoke with Izatt about the acquisition.

Q: How was Bioptigen formed?

A: The origins of Bioptigen were in the early 2000s, at a time when Duke and especially the Pratt School of Engineering were encouraging faculty to be entrepreneurial. I came to Duke in 2001 from the biomedical engineering faculty at Case Western University, attracted by Duke’s outstanding BME department and the opportunity to collaborate with leading ophthalmologists at the Duke Eye Center. When I arrived, I had been leading a university research group for several years and was becoming more interested in entrepreneurship. I had been involved in the early development of optical coherence tomography (OCT) in the early 1990s, and by the time I came to Duke a decade later, it had become a commonplace diagnostic technology in ophthalmology. Over the next few years, my lab at Duke was able to contribute to a revolution in the technology underlying OCT which made it many times more sensitive and much faster at acquiring images in patients. Around this time, I was approached by Eric Buckland, an optics Ph.D. and veteran executive from the optical communications industry who was looking to start a high-tech company in North Carolina. Duke helped us with incubator space, and that was the beginning of Bioptigen. It formed in 2004 around the development of high-performance OCT imaging equipment. Today, OCT has become the dominant imaging technology in ophthalmology.

A: OCT produces 2-D and 3-D images of tissue with a resolution scale many times finer than other medical imaging modalities such as ultrasound, computed tomography, or magnetic resonance imaging. It provides in-depth, cross-sectional images of tissue with a resolution of about 10 micrometers – smaller than the width of a human hair. By 2003, using the new fast imaging technology, we were able to obtain these cross-sectional images live at video rate – essentially movies taken inside of living tissue. That was a big advance over the prior technology, which took several seconds per image. By taking these movies while also scanning the light in the third dimension across the tissue, we could acquire three dimensional blocks of data which doctors could explore in detail later using special software. Most optical images people are familiar with are images of the surface of things — with conventional ophthalmoscopes, for example, doctors look at the surface of the retina through a special microscope. OCT allows you to go from surface imaging to cross-sectional or volumetric imaging, and with much greater resolution. That’s really important because many diseases that cause blindness are quite subtle to diagnose accurately with conventional instruments, requiring many years of training. The retina is a layer of neuronal tissue spread out over the back of the eyeball which is only a half-millimeter thick, and telling the difference between various kinds of injuries, detachments, and the effects of blinding diseases such as macular degeneration or diabetic retinopathy can be challenging. OCT is a major advance in the speed and ease of diagnosing these problems, and just as importantly in monitoring their successful treatment.

These advances are a key reason why OCT has become a multi-billion dollar industry worldwide. Today, if you go to an eye clinic in the developed world with a serious vision problem, you will very likely be imaged with OCT. And so there have been many start-ups in this area in addition to Bioptigen and traditional ophthalmic instrument companies. Taken together, there are now more than two dozen companies developing or marketing OCT devices.

Q: How did Bioptigen progress as a company and move its technology forward?

A: Bioptigen was founded in 2004 and early on was primarily angel-funded, much of it by investors in the Southeast. Hiring highly talented engineers enabled Bioptigen to develop thebest performing instruments with the added ability to show the images to physicians in real-time – that’s a real distinction which characterized Bioptigen’s technology. And I can’t give enough credit to our founding CEO Eric Buckland, who poured his heart and soul into the company, hired and managed outstanding staff, and personally willed the company through the ups and downs of a startup in a turbulent economic decade.

One of Bioptigen’s first products to go to market was a table-top instrument for retinal imaging–one of the first instruments using the new fast imaging technology to receive clearance from the Food & Drug Administration. Previous OCT instruments were not optimized for speed, and in many cases if a doctor ordered a test, the imaging would be done by a technician and the doctor wouldn’t see the resulting images until much later. Bioptigen’s key strategy was to develop technologies to obtain the highest quality images and to do it in real time, so that doctors themselves could operate the instrument while interacting with patients and see the images right away.

Bioptigen’s first product which made really successful use of its real-time imaging capability was the industry’s first commercial handheld OCT device. A doctor can hold this device over the patient’s eye and the images appear simultaneously on a screen so the doctor can tell right away whether he or she is collecting the right images correctly. It’s particularly helpful with patients who aren’t easy to accommodate with previous table-top technologies, such as children, babies or bed-ridden patients.

Q: How is Bioptigen technology being used?

A: There were two principal applications Bioptigen developed for its handheld OCT technology. The first was pioneered by Dr. Cynthia Toth, the Joseph A.C. Wadsworth Professor of Ophthalmology here at Duke with whom I have collaborated for over 15 years. She recognized the potential for handheld imaging of babies and children. Babies squirm and cry, so imaging them takes quite a bit of skill. Dr. Toth introduced the concept of using the handheld OCT device in the pediatric arena, and used it in a landmark study in premature babies to discover fundamental new knowledge about how the retina develops before and even after birth. Dr. Toth now runs a course for pediatric ophthalmologists who come to Duke from around the world for them to learn from her team how to do these examinations.

The second major market for Bioptigen handheld OCT was in pre-clinical imaging – animal imaging. No other OCT company had taken that market seriously, but with the development of Bioptigen’s handheld device, research labs could use state-of-the-art ophthalmic imaging technology on mice, rats, and other important research animals for the first time. This was really quite successful for Bioptigen, and remains important to advance our fundamental understanding of disease and to test treatment protocols.

A: Following development of the handheld OCT device, the next major technology thrust for Bioptigen which ultimately resulted in its acquisition was in intra-operative OCT during ophthalmic surgery. This application of OCT had a lot of motivation from fundamental research at Duke. Dr. Toth is an internationally recognized retinal surgeon, and since 2009 she and I have led a Duke team funded by the National Institutes of Health to investigate the use of real-time OCT to guide surgery of the retina and cornea. Partially motivated by our findings as well as other interactions, Bioptigen decided to put a major effort into developing a commercial surgical OCT system. In ophthalmic surgery, the patient lies face-up on an operating table and the surgeon operates on the eyeball using various instruments, while looking through a microscope suspended above the patient. This is true micro-surgery, where highly trained surgeons must separate, cut, peel and otherwise manipulate some of the most delicate tissues in the body with micrometer scale precision. Presently, surgeons must often do all of this with a less than ideal view of the tissues they are operating on, if the patient suffers from cataract, cloudy cornea or other common conditions which can limit their view. With a real-time OCT scanner built right into the microscope, however, surgeons can view their surgery directly, in cross section with high OCT resolution, in a system which is much less sensitive to intervening tissue clarity. Bioptigen committed its limited resources to develop and commercialize this technology well before it was obvious the application would pan out, and in retrospect it was a good decision. Several companies are now competing to integrate OCT into their ophthalmic surgical microscopes.

Q: What role or roles did Duke play in getting Bioptigen to this point and supporting your efforts?

A: Over its history, Bioptigen licensed over two dozen patents from Duke. These arose from research in my laboratory done by myself and many students, post-docs, and collaborators. Bioptigen also developed a very substantial patent portfolio on its own, the extent of which was a key component of its attractiveness for acquisition. I was a co-founder of the company and served as Board Chairman. For the first couple of years, when we had just a handful of employees, I served as CTO and was involved in product and IP development. Before long, however, Bioptigen was able to hire truly outstanding engineers from both the local research triangle region and nationally, and my position become more advisory. In 2011, I switched to become Chief Science Advisor, and then recently resigned when Leica acquired Bioptigen. Throughout this start-up experience, Duke’s policies on faculty outside activities, conflicts of interest, and inventions, patents, and technology transfer were instrumental in enabling my constructive involvement in Bioptigen while maintaining my professional responsibilities as a faculty member.

The Duke Office of Licensing and Ventures (OLV) deserves credit for managing my laboratory’s substantial patent portfolio and putting considerable effort into negotiating and administrating licensing deals appropriate for a start-up company. Duke had to take a chance on each of our patents, and to be flexible in dealing with a small entity.