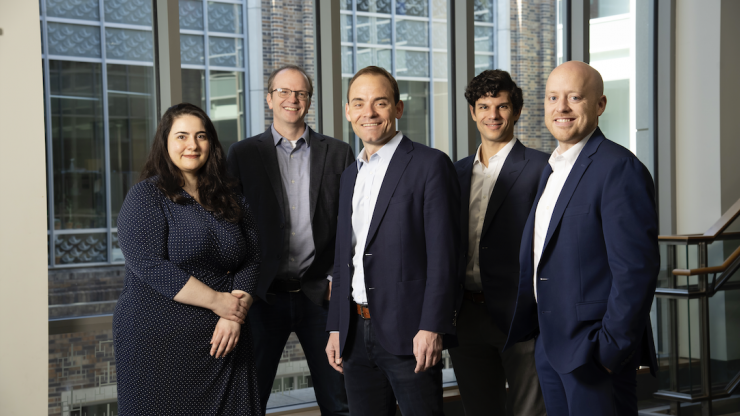 View the original article on the Duke Center for Genomic and Computational Biology's website.

“Schizophrenia is incredibly complex at every level,” Sullivan said, “from DNA to its clinical manifestations.”

Previous genetic studies –some piloted by Sullivan – have narrowed down the search space. Using samples from 25,000 patients who had schizophrenia and 97,000 samples from those who didn’t, researchers discovered 270 different regions of interest in the genome. These regions vary in size, but each on average span hundreds of thousands of base pairs.

“But there’s still a lot we don’t know,” Crawford added. “We don’t know that within each of these regions, which are the most important parts that confer schizophrenia risk, and what the target genes are.” Other mysteries include how genetic differences manifest themselves, and if all or some of those 270 regions are working together.

With this grant, the team will work to narrow down each of those 270 regions to their most important parts. One tactic they will use is high throughput CRISPR screens to silence and/or activate any region of interest in the genome to see which subregions respond and how. This builds upon nearly 10 years of research between Gersbach and Crawford who have previously collaborated to use CRISPR to regulate human genes in their natural position genome, perturb distal gene regulatory elements in non-coding regions, and scale their efforts up to high throughput screening of hundreds of elements on single genes.

“Now we are continuing to expand the scale and scope of this work,” Gersbach said, “by assessing thousands of elements on hundreds of genes and applying that to decipher complex disease mechanisms that were previously intractable with a focus on schizophrenia.”

The team will also take those important regions and use stem cells derived from individuals both with and without schizophrenia and make brain organoids – cells in a dish that recapitulate different cells in the brain – and conduct experiments to see what happens if they silence specific regions of the genome.

Through these efforts, they hope to better understand the basic “parts list” for schizophrenia with greater rigor and certainty than ever before. “We aren’t going to solve everything,” Crawford said, “but we will be able to get a better understanding of what’s going on in each of those 270 regions.”