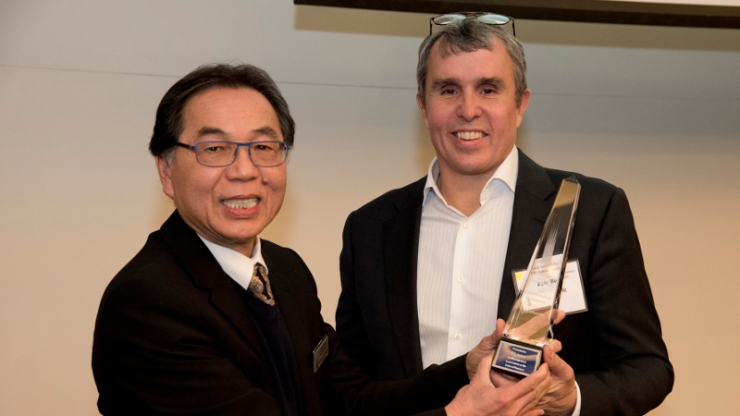 Nearly 200 researchers from across Duke’s campus and beyond came together on March 13 and 14 to discuss the latest advances in biophotonics research at the 2017 Fitzpatrick Institute for Photonics (FIP) symposium.  With a theme of “Biophotonics for the Medicine of the Future,” the two-day event highlighted how light-based technologies are advancing our understanding of biological systems and changing the way we diagnose and treat diseases from cancer to infectious diseases.

This was FIP’s annual symposium, and reflected the institute’s continued growth since its founding.  “Duke now has over 133 faculty members in the institute with work extending across 39 departments, and every year the FIP symposium includes more faculty and becomes more impressive,” said Provost Sally Kornbluth during her opening address. “This is a welcoming community and it’s exciting that more and more people want to be a part of it.”

Pratt School of Engineering Dean Ravi Bellamkonda and Dr. Nancy Andrews, dean at the Duke University School of Medicine, also welcomed the participants, noting in particular the strength of collaborative research that has been fostered through FIP. “Thanks to the Fitzpatrick Institute’s success in leveraging faculty expertise across Pratt, Trinity College of Arts & Sciences and the School of Medicine, Duke is today one of the foremost leaders in biophotonics research in the world,” said Bellamkonda. “The institute is truly one of our signature strengths.”

Before the presentations began, Tuan Vo-Dinh, director of the Fitzpatrick Institute for Photonics, introduced special guest Michael Fitzpatrick T’70, whose generous gifts to Duke through the Fitzpatrick Foundation established the FIP and led to the naming of the Fitzpatrick Center for Interdisciplinary Engineering, Medicine and Applied Sciences (FCIEMAS). “When we launched the institute we had a dream that photonics would become one of the most influential technologies around, especially in medicine, and I feel privileged to be able to come here and recognize that as a reality,” Fitzpatrick said. “The power of light is amazing, and although we’ve just scratched the surface we’re off in some good directions.” 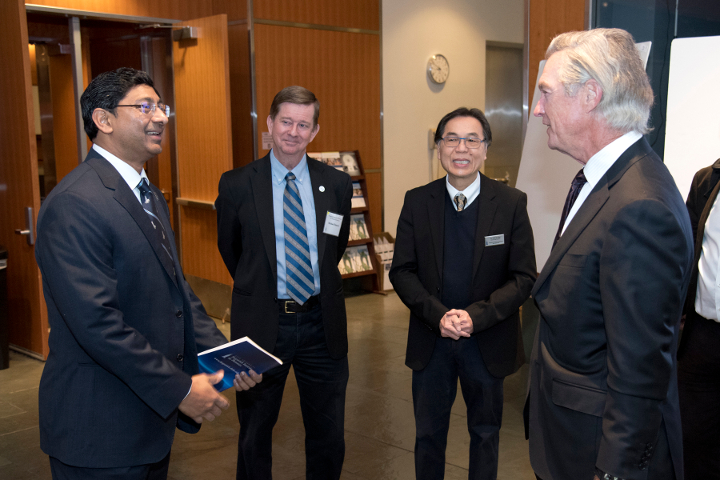 The symposium featured a keynote address by Eric Betzig, the 2014 Nobel Laureate in Chemistry, who also received the 2017 FIP Pioneer Award in recognition of his groundbreaking work imaging life at high spatiotemporal resolution. The plenary lecture was given by Chad Mirkin, director of Northwestern University’s International Institute for Nanotechnology, while Paul French of Imperial College London, Mingjun Zhang of Ohio University and Daniel Herr of UNC-Greensboro delivered invited talks.

More than 20 Duke faculty from across campus also presented on a range of topics, including innovations for cervical cancer treatment, photo-immunotherapy for treating metastatic and recurrent tumors, new optics-based methods for eye exams and surgery, and the use of immersive virtual reality to mimic real-world tasks. Underscoring the importance of collaboration, the symposium also included a session co-sponsored by the MEDx program, which focused on emerging biophotonics projects between engineering and medicine.

“A decade ago the creation of the FIP was a cornerstone of the photonics initiative at Duke,” said Vo-Dinh. “The FIP symposium is a unique opportunity to showcase the outstanding interdisciplinary research of the faculty across the Duke campus in cutting-edge areas integrating science, engineering and medicine around the scientific discipline based on photonics, the science involving interactions of light and matter.

“This collaborative and cross-disciplinary effort is one of the exceptional features that makes Duke an excellent place for photonics research.”

Watch videos of the talks at Panopto and learn more at fitzpatrick.duke.edu.