Two Duke engineering faculty have been named as the inaugural recipients of the Edmund T. Pratt, Jr. Professorships. 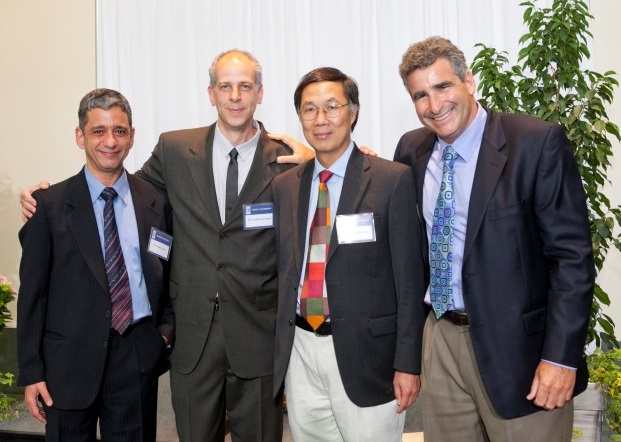 The new professorships, made possible through the gift of anonymous donors, recognize the namesake of the Edmund T. Pratt, Jr. School of Engineering at Duke.

“According to a Chinese proverb, if you want happiness for a lifetime, you should help someone else,” said Dean Tom Katsouleas at the ceremony. “I certainly wish a lifetime of happiness for the donors of these two endowed professorships, who have been steadfast in their commitment to help our faculty and students by giving back to Duke.”

Katsouleas noted that the endowed professorship played a key role in the successful recruitment last year of Knio, “our unanimous top choice” for his position. A leader in the fields of uncertainty and optimization, Knio came to Duke from Johns Hopkins University, where he was professor of mechanical engineering. His research focuses on computational fluid mechanics, oceanic and atmospheric flows, turbulent flow, physical acoustics, chemically-reactive flow, energetic materials, microfluidic devices, dynamical systems, numerical methods, and asymptotic and stochastic techniques. He is now director of risk assessment and uncertainty and co-director of the Center for Materials Genomics at Duke.

“I’m really thankful to Tom, Pratt and the generous donors of this professorship for the opportunity to come to Duke,” Knio said. “I’m humbled and honored to be part of this team.”

The second professorship also went to a new faculty member, Guillermo Sapiro, who came to Duke in 2012 from the University of Minnesota. “Guillermo has had a transformative impact across campus, working with faculty from departments ranging from psychology and radiology to computer science and mathematics,” said Katsouleas. “He’s not only engaging and collaborative, but a leader in research and teaching.”

“Duke has been a great family to me,” said Sapiro, who holds secondary appointments in the departments of biomedical engineering and computer science. The recipient of major awards including the Presidential Early Career Awards for Scientist and Engineers (PECASE) in 1998, the National Science Foundation Career Award in 1999, and the National Security Science and Engineering Faculty Fellowship in 2010, Sapiro is also the founding editor-in-chief of the SIAM Journal on Imaging Sciences, currently ranked second in impact factor in all applied math.

His research focuses on developing image-processing algorithms that interpret vast amounts of data from photos or video and translate the findings into practical solutions, from medical breakthroughs to new surveillance methods to improvements in consumer products such as Adobe’s After Effects software.