The new approach opens up nearly 90 percent of CRISPR-Cas systems for use in human cells, including biomedical research and potential gene and cell therapies 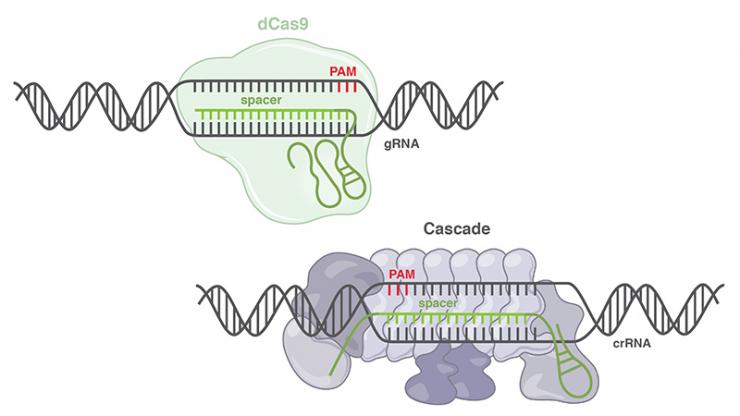 With this new approach, the researchers hope to dramatically expand the CRISPR-based tools available to biomedical engineers, opening up a new and diverse frontier of genome engineering technologies.

In a study appearing on Sept. 23 in Nature Biotechnology, Charles Gersbach, the Rooney Family Associate Professor of Biomedical Engineering at Duke, and Adrian Oliver, a post-doctoral fellow in the Gersbach lab who led the project, describe how they successfully harnessed Class 1 CRISPR systems to turn target genes on and off and edit the epigenome in human cells for the first time.

CRISPR-Cas is a defense system in which bacteria use RNA molecules and CRISPR-associated (Cas) proteins to target and destroy the DNA of invading viruses. The discovery of this phenomenon and the repurposing of the molecular machinery set off a genome-editing revolution as researchers learned how to wield the tool to specifically target and edit DNA in human cells.

CRISPR-Cas9, the most commonly used genome editing tool today, is categorized as a Class 2 CRISPR system. Class 2 systems are less common in the bacterial world, but they are theoretically simpler to work with, as they rely on only one Cas protein to target and cleave DNA.

Class 1 systems are not so simple, relying on multiple proteins working together in a complex called Cascade (CRISPR-associated complex for antiviral defense) to target DNA. After binding, Cascade recruits a Cas3 protein that cuts the DNA.

"If you were to look at the individual CRISPR systems of all the bacteria in the world, nearly 90 percent are Class 1 systems," said Gersbach. "CRISPR-Cas biology is an incredible source for biotechnology tools, but until recently everyone has only been looking at a small slice of the pie."

To demonstrate the capabilities of the Class 1 system, Oliver attached gene activators to specific sites along a type I E. coli Cascade complex and targeted the system to bind gene promoters, which regulate gene expression levels. Because she did not include the Cas3 protein in the experiment, there was no cutting of the DNA and no change to underlying DNA sequence. The experiment showed that the Cascade activator not only binds to the correct site and can turn up the levels of the target gene, but does so with accuracy and specificity comparable to CRISPR/Cas9.

Oliver repeated the process using type I Cascade complexes from an additional bacterial strain that was particularly robust in working at a variety of target sites. She also showed that the activator domain could be swapped for a repressor to turn target genes off. Again, the researchers noted accuracy and specificity comparable to CRISPR/Cas9 methods.

"We have found Cascade's structure to be remarkably modular, allowing for a variety of sites to attach activators or repressors, which are great tools for altering gene expression in human cells," Oliver said. "The flexible nature of Cascade makes it a promising genome engineering technology."

Gersbach and Oliver were encouraged to investigate the more complicated Class 1 CRISPR systems by their collaborators at nearby North Carolina State University, Professors Rodolphe Barrangou and Chase Beisel, who is now at the Helmholtz Centre for Infection Research in Germany. Barrangou is a microbiologist who has studied the natural biology of diverse CRISPR defense mechanisms for nearly two decades, and Beisel is a chemical engineer who has worked with Barrangou on engineering microorganisms with Class 1 CRISPR systems. They were both curious whether Gersbach's lab could use these systems in human cells similar to their work with Cas9.

"This work and the resulting technologies are a fantastic example of how collaboration across disciplines and across universities in the North Carolina Research Triangle can be highly innovative and productive" says Barrangou, the Todd R. Klaenhammer Distinguished Professor in Probiotics Research at North Carolina State University.

Now, the team is optimistic that their study, and the related work of others in the field, will incentivize new research into Class 1 CRISPR systems.

"The purpose of this project was to explore the diversity of CRISPR systems," said Gersbach. "There have been thousands of papers about CRISPR-Cas9 in the last decade, and yet we're constantly learning new things about it. With this study we're applying that mindset to the other 90% of what's out there."

So far, the team has shown that these Class 1 systems are comparable to to CRISPR-Cas9 in terms of accuracy and application. As they consider future directions, they are curious to explore how these systems differ from their Class 2 counterparts, and how these differences could prove useful for biotechnology applications.

"We know CRISPR could have a big impact on human health," said Gersbach. "But we're still at the very beginning of understanding how CRISPR is going to be used, what it can do, and what systems are available to us. We expect that this new tool will enable new areas of genome engineering."