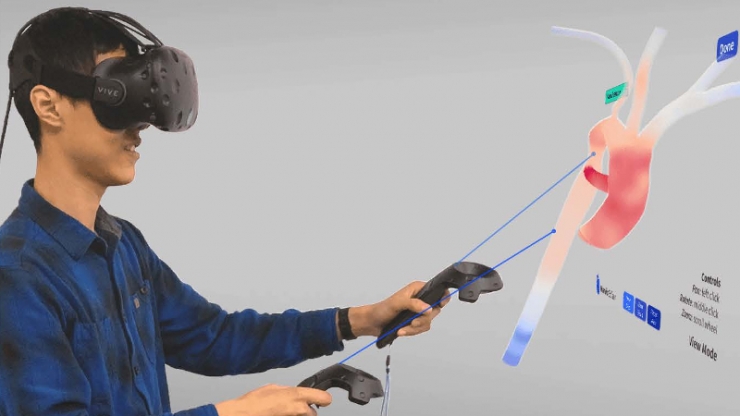 Biomedical engineers at Duke University are developing a massive fluid dynamics simulator that can model blood flow through the full human arterial system at subcellular resolution. One of the goals of the effort is to provide doctors with guidance in their treatment plans by allowing them to simulate a patient’s specific vasculature and accurately predict how decisions such as stent placement, conduit insertions and other geometric alterations to blood flow will affect surgical outcomes.

One of the largest barriers to clinical adoption however, is developing a user interface that allows clinicians to easily explore their options without needing any expertise in computer science. As any programmer will tell you, designing a smooth, intuitive interface that people from all types of backgrounds can quickly master is a tall task.

In a new study published on May 7 in the Journal of Computational Science, the Duke researchers report on their initial foray into creating a user interface for their blood flow simulation tool called HARVEY. They explored various interfaces ranging from standard desktop displays to immersive virtual reality experiences and found that, while users might be comfortable using a standard mouse and keyboard, some more futuristic interfaces might hold the key to widespread adoption.

“HARVEY currently requires knowledge of C coding and command line interfaces, which really limits who can use the program,” said Amanda Randles, the Alfred Winborne and Victoria Stover Mordecai Assistant Professor of Biomedical Sciences at Duke. “This paper introduces a graphical user interface we’ve developed called Harvis, so that anybody can use Harvey, whether they’re surgeons trying to figure out the best placement for a stent or biomedical researchers trying to design a new type of stent altogether.”

Randles has been developing the HARVEY code for nearly a decade, having begun the work as a doctoral student in the research group of Efthimios Kaxiras, the John Hasbrouck Van Vleck Professor of Pure and Applied Physics at Harvard University. In that time, she has demonstrated that HARVEY can accurately model blood flow through patient-specific aortas and other vascular geometries on longer scales. She’s also shown the program can model 3D blood flows on the scale of the full human body.

Putting HARVEY to work, Randles has helped researchers understand stent treatment of cerebral aneurysms and the growth of aneurysms. She has created a quick, noninvasive way to check for peripheral arterial disease, and to better understand how circulating cancer cells adhere to different tissues. With steady progress on the computational abilities of the code and demonstrated usefulness in real-world applications, Randles is now working to make sure others can make the best use of its abilities.

“As cardiovascular disease continues to be the number one cause of death in the US, the ability to improve treatment planning and outcome remains a significant challenge,” said Randles. “With the maturity and availability of VR/AR devices, we need to understand the role these technologies can play in the interaction with such data. This research is a much-needed step for developing future software to combat cardiovascular disease.”

In the new study, Randles and her biomedical engineering colleagues, research associate Harvey Shi and graduate student Jeff Ames, put the Harvis interface they’ve been developing to the test. They asked medical students and biomedical researchers to simulate three different situations — placing a conduit between two blood vessels, expanding or shrinking the size of a blood vessel, or placing a stent within a blood vessel. The test users attempted these tasks using either a standard mouse and computer screen, a “Z-space” semi-immersive virtual reality device, or a fully immersive virtual reality experience with an HTC Vive display device.

The results show that the students and researchers could use the standard mouse and keyboard interface and the fully immersive VR interface equally as well in a majority of cases both quantitatively and qualitatively. The semi-immersive display, basically a special pointing tool combined with a monitor and 3D glasses, however, ranked behind the other two devices, as the users had some issues adjusting to the unique hardware setup and controls.

The study also presents a generalizable design architecture for other simulated workflows, laying out a detailed description of the rationale for the design of Harvis, which can be extended to similar platforms.

“People enjoyed the 3D interface more,” said Randles. “And if they enjoyed it more, they’re more likely to actually use it. It could also be a fun and exciting way to get students engaged in classes about the vasculature system and hemodynamics.”

Randles says she plans on running experiments to see if her 3D blood flow interface can help medical students retain important knowledge better than current standards. In the future, tools like this could assist with treatment planning such as placements of stents using a more intuitive virtual reality interface. Randles also expects these types of tools will facilitate biomedical research in the personalized flow space.