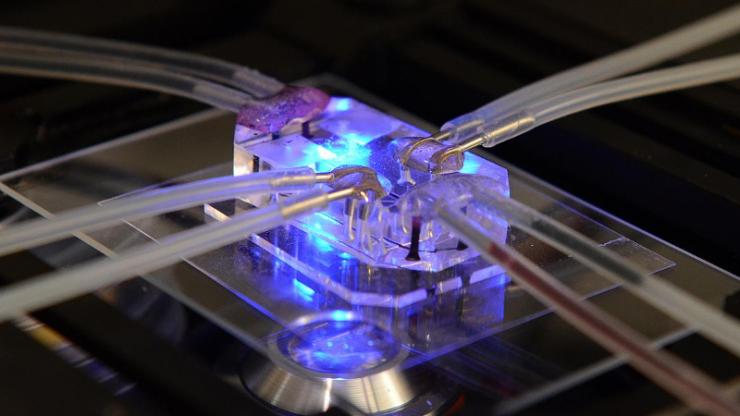 Biomedical engineers at Duke University have received more than $2 million to develop “tissue chips” that model atherosclerosis and muscle dysfunction in rheumatoid arthritis.  They then plan to link the various models together and examine how simulated exercise can reduce the impact of inflammation.

“People with rheumatoid arthritis and other autoimmune diseases are at higher risk of cardiovascular disease, likely a result of systemic inflammation,” said George Truskey, senior associate dean of Duke’s Pratt School of Engineering and lead investigator of the new grant. “We want to develop disease models for atherosclerosis and rheumatoid arthritis to find out how systemic inflammation affects the extent of disease.”

The two-year grant—which can be extended up to five years total—is part of a larger 13-award, $30 million project announced by the National Institutes of Health to develop 3-D microphysiological system platforms that model human disease. These platforms, called “tissue chips,” support living cells and human tissues to mimic the complex biological functions of human organs and systems and provide a new way to test potential drug efficacy.

These “Tissue Chip for Disease Modeling and Efficacy Testing” awards may enable scientists to better understand disease mechanisms and predict more accurately how patients will respond to specific drugs. The support is made possible through NIH’s National Center for Advancing Translational Sciences' (NCATS) Tissue Chip for Drug Screening program, which leads this effort in collaboration with other NIH Institutes and Centers.

“The goal is for these tissue chips to provide more accurate platforms to understand diseases, and to be more predictive of the human response to drugs than current research models, thereby improving the success rate of candidate drugs in human clinical trials,” said NCATS Director Christopher P. Austin, M.D.

NCATS launched its Tissue Chip program in 2012 to lead the development of highly innovative microphysiological systems to study drug safety and toxicity in a faster, more effective way than current methods. The tissue chips can be integrated to form a human body-on-a-chip, enabling researchers to study investigational drugs and therapeutic agents across the entire body prior to human clinical trials.

Truskey and his colleagues have been a part of the project since the inception of the NCATS Tissue Chip program. Over the past five years, the interdisciplinary team has succeeded in developing tissue-on-a-chip technologies for healthy human skeletal muscle and blood vessels using primary and induced pluripotent stem cells. They’ve shown their platform can assess the response to drugs and pro-inflammatory biological signals, and developed a vascular disease model of the extremely rare disease progeria.

With the new awards, the NIH sought to fund projects that promised to model two or more diseases. The team’s new goal is to develop clinically relevant disease models to examine atherosclerosis and rheumatoid arthritis risk for muscle dysfunction and the role of exercise in attenuating disease-associated muscle inflammation. In the second phase of the awards, researchers will partner with pharmaceutical companies to further evaluate the usefulness of validated disease models—those that accurately mimic disease biology—in assessing the effectiveness of candidate drugs.  The Duke group will examine drugs that reduce inflammation and potentially address gene variants that promote atherosclerosis and muscle inflammation.

In addition to NCATS, the new award is supported by the National Institute of Arthritis and Musculoskeletal and Skin Diseases.