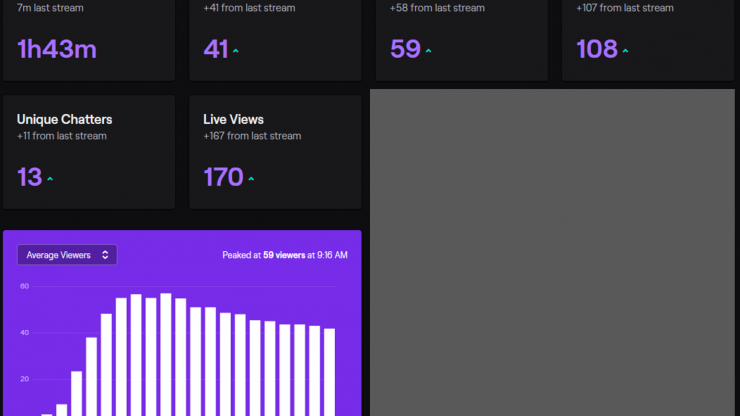 When Narayanan Rengaswamy faced his committee to defend his PhD dissertation, "Classical Coding Approaches to Quantum Applications," it would be at the front of a room full of his friends and peers, in the university where he had spent the last four years of his life. Assuming the defense was successful, he would enjoy the handshakes and well wishes of the faculty, staff and students who had cheered him along his academic journey. Laughter—and perhaps a cake—might later be shared among friends.

That’s what he had dreamed of, anyway, until a few short weeks ago.

When Duke Graduate School emailed PhD candidates outlining the university’s new policy on public PhD defenses in response to the coronavirus pandemic—only the candidate and their committee were allowed to be physically present—Narayanan Rengaswamy’s heart dropped. As ever more stringent precautions were enacted, the Department of Electrical and Computer Engineering finally asked that all students conducting defenses after March 16th, present remotely, to remote committees.

Rengaswamy did not rage, nor cry, nor gnash his teeth at the new guidelines or the need to hastily master and implement Zoom, the now ubiquitous platform for virtual meetings.

“I chose to focus on the bright side of the online format,” he said. “I invited many friends from different parts of the world to join virtually for my live defense. Moreover, I recognized that this format also allowed me to record my defense talk, and share it publicly.” Rengaswamy added that the new, closer proximity of his presentation slides to his committee members probably made it easier to focus on the content.

“I invited many friends from different parts of the world to join virtually for my live defense. Moreover, I recognized that this format also allowed me to record my defense talk, and share it publicly.”

Indeed, the positive experiences of many PhD candidates who have defended over the past two weeks have many wondering: is this perhaps the better format?

Rengaswamy was the first PhD candidate in Duke Engineering to defend online, and his approach to integrating the necessary technology was straightforward. With the exception of practicing with the new software and devoting a bit more thought to how to introduce his research to make it more accessible to a wider audience, he prepared no differently than he otherwise would have. The same went for Guoyin Wang, who on March 24 defended “Applications of Deep Representation Learning to Natural Language Processing and Satellite Imagery," supervised by David Carlson, and became the first candidate in Duke Civil and Environmental Engineering to successfully defend remotely.

Some candidates, however, crafted more elaborate presentation setups. Michael Lee, who had been working in the lab of Duke Mechanical Engineering & Materials Science Professor Earl Dowell to reduce the cost of fluid dynamics simulations, simultaneously used Zoom to communicate with his committee and Twitch to broadcast his defense publicly. A third component, Slido, let users anonymously submit questions that could be upvoted by others to indicate high interest in the topic.

“One monitor was dedicated to the presentation, but on a second monitor I had four windows open,” said Lee. “There was the Twitch stream app to see that the chat was working, there was a Q&A open in another, Zoom participants were in a third window, and my performance monitor was up to make sure I wasn’t maxing out my CPU or WiFi capacity. To be honest, it was a lot to keep track of.” Once he got through the first few disorienting minutes, though, Lee settled in and gave what his viewers—more than one hundred of them—saw as a masterful presentation. 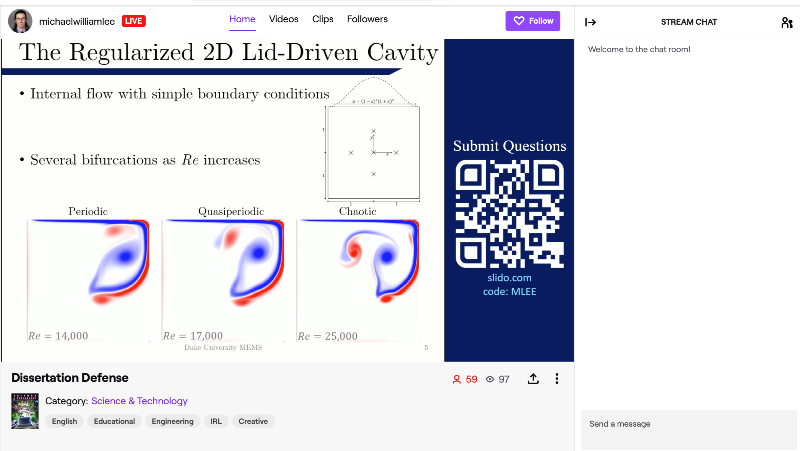 Luis Navarro, another MEMS PhD studying materials science with Stefan Zauscher, was also able to draw a larger crowd by using remote learning technologies. “It was super easy to allow friends and family to see my talk,” he said. “My parents were planning on flying over for an in-person defense. However, because it was remote, a lot of my friends, some living as far away as Japan and China, were able to participate live. It was great to share with people who would otherwise have totally missed the event.”

"Because it was remote, a lot of my friends, some living as far away as Japan and China, were able to participate live. It was great to share with people who would otherwise have totally missed the event.”

The feeling of connectedness played a big part in what Rengaswamy called one of the most memorable days of his life. “My kind committee members (advisor Henry Pfister, co-advisor Robert Calderbank, Kenneth Brown, Iman Marvian and Jianfeng Lu) actively participated in my defense, asked interesting questions driven purely by curiosity and expressed their heartfelt best wishes after the defense. To top it off, my parents were overjoyed that their only child had earned the title ‘doctor’ and poured out their emotions and blessings over a video call.” Similarly, it was particularly meaningful to Lee that his grandparents in upstate New York were watching his presentation. 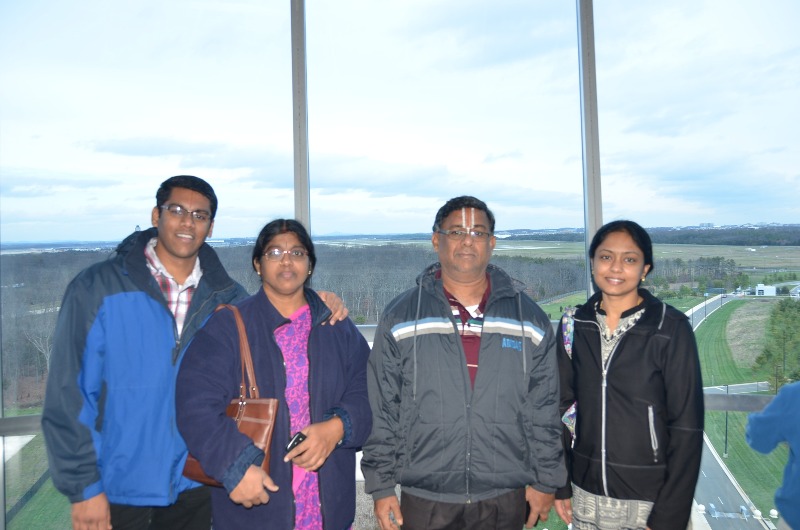 “While pursuing a PhD, students develop their skills in perseverance, grit and dealing with adversity,” says Jennifer West, the associate dean of PhD education. “While a remote defense is not what students had envisioned, I am very proud of how they are handling this situation.” 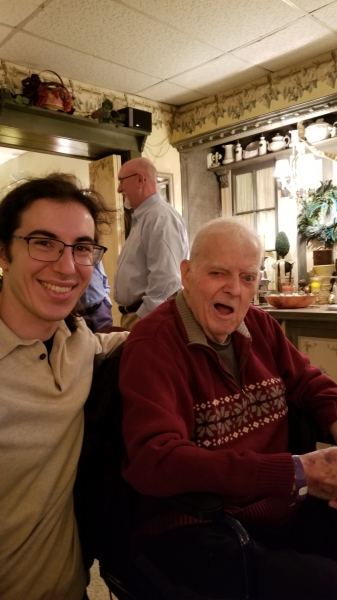 As candidates continue to present and defend over the coming weeks, successful candidates and their committee chairs have these tips to offer, so that new PhDs can stop worrying about their tech, and go back to dreaming of their post-pass celebrations—like Daniela Cruz, a candidate in Duke Electrical and Computer Engineering professor Maiken Mikkelsen’s lab, who will defend her research into plasmonics-enhanced immunoassays next week.

“Since most places will be closed, I plan to go outdoors and enjoy nature,” said Cruz. “I also plan to open a bottle of champagne and virtually celebrate with my family in California and Ecuador.”

Preparing for an online defense? Take these tips from new PhDs and their advisors: