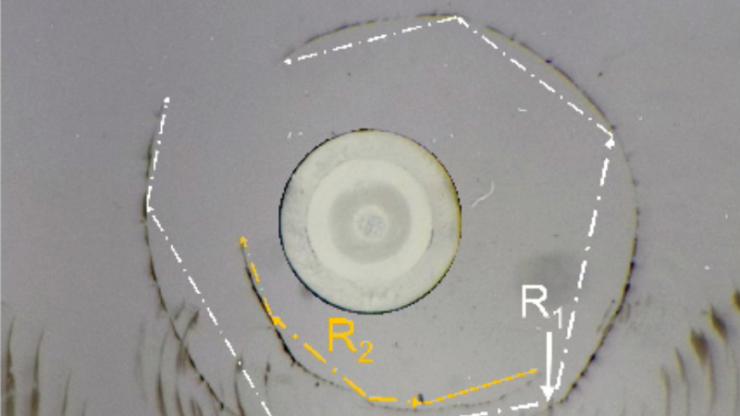 A plane has to be going pretty fast for a mere raindrop to crack its windshield, but it can happen. Now, new models of the physics behind the improbable feat may just help doctors crack kidney stones to pieces.

When supersonic jets were first being developed for commercial use in the 1960s, researchers discovered a curious phenomenon that sometimes occurs on test flights through rainforests. Even though raindrops weigh almost nothing, they are capable of creating ring-shaped cracks in the jets’ substantial windshields.

Although scientists initially had difficulty explaining this curiosity, Professors Frank Philip Bowden and John Field of the University of Cambridge eventually recognized surface waves as the culprits. Because surface waves spread in only two dimensions, they pack a much more powerful punch than their three-dimensional counterparts. Certain details of the phenomenon, however, have remained poorly understood due to a lack of mathematics to describe it and experimental setups to validate proposed models.

In a new paper published Nov. 1 in Physical Review Research, Pei Zhong, professor of mechanical engineering and materials science at Duke University, and his former graduate student Ying Zhang, now an acoustical engineer for Bose, have closed that gap in scientific knowledge.

The pair created an experimental system to visualize the stress created by such surface waves. They put a lithotripsy device designed to shatter kidney stones with soundwaves in a vat of water covered by a sheet of glass, then set off a point-source explosion that expanded as a spherical shock wave. Depending on the angle at which the shockwave hits the glass, it can produce surface waves that spread on the water-glass boundary.

With a high-speed camera, the team measured the speed of various elements of a shock wave over the mere moments it takes to propagate through the glass. Zhang used those measurements to validate a finite element model constructed using a multiphysics software called COMSOL. The models successfully reproduced the characteristics of a series of bulk and surface waves often observed in such situations, including one that may save people from needing surgery to remove kidney stones.

The researchers discovered that the type of wave primarily responsible for most of the stress and damage -- called a leaky Rayleigh wave -- propagates much faster than a second type of wave called an evanescent wave. While they’re created at the same time on the water-glass boundary, the leaky Rayleigh wave eventually pulls away from the evanescent wave, which is the moment and location of the highest tensile stress caused by the phenomenon.

They also discovered that the circular cracks originally observed on the supersonic jet windshields don’t necessarily form at this point—they require an existing imperfection in the glass to get started. But once initiated, the crack propagates along a circular trajectory, following the first principal stress in the solid set off by the advancing leaky Rayleigh wave.

“The challenge for treating kidney stones is to reduce the stones to very fine fragments so the doctors don’t have to follow up with any ancillary procedures,” said Zhong. “Based on the insight gained through this model, we may be able to optimize the shape of the shock waves and lithotripter design to create more tension on the surface of the kidney stones to open up the defects more efficiently.”