Once implemented, gate is expected to speed up several fundamental algorithms for quantum computing 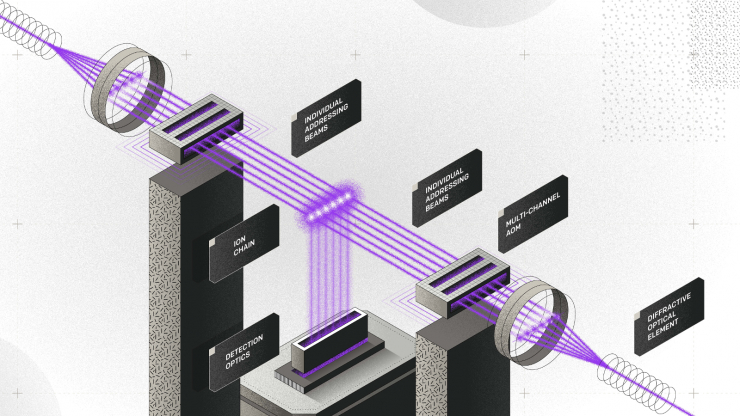 DURHAM, N.C. & COLLEGE PARK, Md. -- Today, the Duke Quantum Center (DQC) at Duke University and IonQ (NYSE: IONQ) announced the invention of a new quantum computing operation with the potential to accelerate several key quantum computing techniques and contribute to scaling quantum algorithms. The new quantum gate is a novel way to operate on many connected qubits at once and leverages the multi-qubit communication bus available only on IonQ and DQC quantum computers. Full details of the gate technique can be found on the preprint archive arXiv at arXiv:2202.04230.

The new gate family includes the N-qubit Toffoli gate, which flips a select qubit if and only if all the other qubits are in a particular state. Unlike standard two-qubit quantum computing gates, the N-qubit Toffoli gate acts on many qubits at once, leading to more efficient operations. The gate appears naturally in many common quantum algorithms.

IonQ and Duke’s discovery may lead to significant efficiency gains in solving fundamental quantum algorithms, such as Grover’s search algorithm, variational quantum eigensolvers (VQEs), and arithmetic operations like addition and multiplication. These use cases are ubiquitous across quantum computing applications, and are core to IonQ’s work in quantum chemistry, quantum finance, and quantum machine learning. They are also key components of commonly accepted industry benchmarks for quantum computers, which have already shown IonQ’s computers to be clear industry leaders.

“This discovery is an example of us continuing to build on the leading technical architecture we've established. It adds to the unique and powerful capabilities we are developing for quantum computing applications," said Peter Chapman, CEO at IonQ.

This research, conducted at Duke by Dr. Or Katz, Prof. Marko Cetina, and IonQ co-Founder and Chief Scientist Prof. Christopher Monroe, will be integrated into IonQ’s quantum computing operating system for the general public to use. Monroe notes that, “no other available quantum computing architectures—not even other ion-based quantum computers—are able to utilize this new family of N-qubit gates. This is because IonQ’s quantum computers uniquely feature full connectivity and a wide communication bus that allows all qubits to talk to each other simultaneously.”

This discovery follows a series of announcements around IonQ’s research efforts and preparations for scale. In December, IonQ announced that it plans to use barium ions as qubits in its systems, bringing about a wave of advantages it believes will enable advanced quantum computing architectures. Last year, the team also debuted the industry’s first Reconfigurable Multicore Quantum Architecture and Evaporated Glass Trap technology, both of which are expected to contribute to scaling the number of qubits in IonQ’s quantum computers.

IonQ is the only company with its quantum systems available through the cloud on Amazon Braket, Microsoft Azure, and Google Cloud, as well as through direct API access. IonQ was founded in 2015 by Christopher Monroe and Jungsang Kim based on 25 years of pioneering research. To learn more, visit www.ionq.com.