A New Way of Looking at Melanomas and Renaissance Paintings

During the last decade, Duke chemist Warren S. Warren has developed and refined a laser technique to help practitioners in both medicine and art see more deeply. For his work, Warren is receiving the 2015 C. E. K. Mees Medal, an award given biennially by the Optical Society of America to recognize work that transcends disciplinary boundaries. 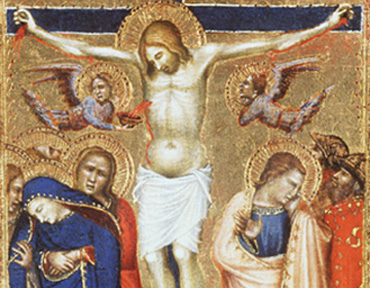 The laser technique Warren has developed can be used to examine the chemical composition and structure of skin moles, providing information that may one day help doctors predict which melanomas will metastasize. The same technique sheds new light on pigment and paint layers in old paintings, without requiring the removal of any paint.

“The problems we look at absolutely cannot be pigeonholed into individual departments,” said Warren, who is the James B. Duke Professor of Chemistry, with secondary appointments in the departments of radiology, biomedical engineering, and physics. “This is the strength of Duke—we have good physical proximity to the basic science departments, engineering and the basic medical sciences, and we have a lot of people who buy into this idea that individual departmental boundaries don’t make a lot of sense.”

Warren regularly transcends the boundaries of Duke as well, whether working with scientists at other universities or art conservators at the North Carolina Museum of Art, the National Gallery in Washington or in Europe.

To see more clearly into both moles and paintings, Warren builds custom microscopes that use two laser pulses separated in time by picoseconds (each of which is one trillionth of a second). The first pulse excites the molecules of the compound being studied and the second probes the result. The technique, called pump-probe spectroscopy, takes a picture showing the concentration and arrangement of certain pigments in the sample, essentially creating a molecular fingerprint.

While pump-probe spectroscopy has been around for decades, it originally required powerful lasers that wouldn’t be appropriate for old paintings or human skin. Warren and his team developed technology to “sculpt” less powerful beams to create a safe yet effective probe that can be used to examine materials to a depth of about 1 mm, allowing a view beneath the surface of skin or a painting. 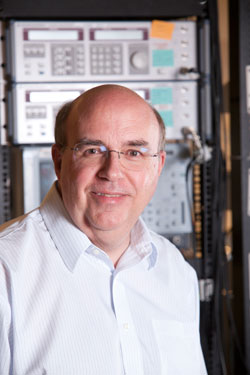 “We were able to figure out how to use less power than a laser pointer and still get out the critical information,” he said. The critical information for an old painting might be the chemical composition of the pigments. For example, Warren’s pump-probe lasers can distinguish synthetic blue pigments from those made of lapis lazuli, even though they look identical to the naked eye. Information like this can help determine the provenance, age or author of a painting.

Pump-probe spectroscopy can also create a virtual cross-section of the layers of a painting, eliminating the need to take a sample with a scalpel. Warren and his team have analyzed several paintings in the lab, and are working on a portable laser system that could be used in art museums.

In the case of suspicious moles, pump-probe spectroscopy has the potential to improve the diagnosis of melanoma. Currently that diagnosis involves slicing, staining and studying the structure of a mole under a microscope, a process whose accuracy relies heavily on physician experience.

If the diagnosis is melanoma, the standard protocol is “watchful waiting” after removal. For most patients, the cancer never comes back, but for an unlucky minority, the cancer metastasizes in another part of the body. “The doctor would really like to know, is the cancer likely to metastasize or not?” Warren said.

With his laser system, Warren can slice a mole virtually, analyzing the content of each layer. He and his students have done just this for hundreds of excised and preserved moles. “The way we use the laser pulses gives us this extra information about chemical content and molecular composition,” Warren said. “We’ve been able to see fundamental differences in the lesions between those that went on to metastasize and those that didn’t.”

Warren would like to set up a multi-center clinical trial to test more mole samples. If the results hold up, he envisions the technology may one day be used routinely to examine removed moles.

“Warren’s work in melanoma has enormous potential,” said Bruce Tromberg, professor of biomedical engineering and surgery at the University of California, Irvine, and the director of the Beckman Laser Institute and Medical Clinic. “He’s approaching this from a fresh perspective and has put together a very talented team. His techniques are providing us with new insight and are stimulating fresh ideas and conversations in our field.”