David Needham has been awarded an honorary doctorate degree by the University of Nottingham. Described by the university as the highest honor that it can bestow, the Doctor of Science honoris causa (without examination) was presented during the pharmacy school’s graduation ceremony on Thursday, December 10, 2015. 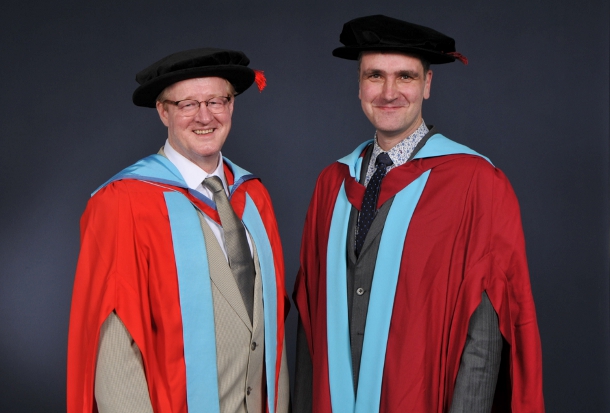 As described in the graduation booklet, the DSc degree is given “to people of great distinction in their field and those who have given great success to the university.” In Needham’s case, both descriptions are true.

After earning his doctorate in chemistry from the University of Nottingham, Needham decided that if he was going to work that hard, he wanted to do something useful. Inspired by his mother’s bout with breast cancer in 1972, Needham turned his attention to cancer research during his PhD in 1978 in the chemistry department at Nottingham. It was a good decision, as he has gained a world-wide reputation in the field over the past three-and-a-half decades.

Joining Duke University’s faculty in 1987, Needham’s research focused on lipid bilayers—the membrane material that surrounds every living cell. While studying this material, he responded to the need for better targeting of drugs at the sites of tumors.

After starting a collaboration in 1991 with Mark Dewhirst, professor of radiation oncology and director of the Duke Hyperthermia Program, Dewhirst made a request for “something I can heat and it releases drug.” In 1996, Needham invented a technique where anti-cancer chemotherapeutics are loaded into tiny “nano-capsules” made of lipids. 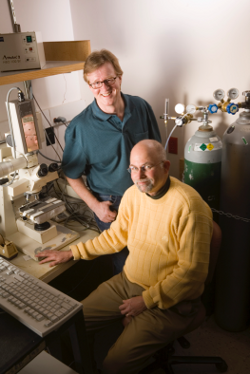 When injected into the patient’s blood stream, the lipids protect the body from this very toxic chemotherapy by keeping it in the capsule. But once heated, they release their contents into the heat-targeted tumor. This novel anti-cancer therapeutic was licensed by Duke to Celsion Corporation in 1999 and is currently in Phase III clinical trials for a range of cancers, including primary liver cancer and chest wall recurrence of breast cancer after mastectomy.

With this first treatment now well on its way, Needham has shifted his focus to a concept he calls “putting the drug in the cancer’s food,” which, if successful, he wants to offer at cost, for no profit. He is pursuing this new concept for an anti-metastatic treatment by virtue of a $6.5 million, five-year award from the Danish National Research Foundation as the Niels Bohr Visiting Professor to the University of Southern Denmark.

But Needham has done more than make his doctoral Alma Mater proud—he’s also contributing to its legacy in person. In 2013, he returned to the University of Nottingham as a visiting honorary professor in the pharmacy school—one of the top pharmacy schools in the world. There, he has continued to innovate in the laboratory as well as the classroom, helping to implement a style of learning he calls EDU-Kation. EDU-K stands for: Experiment and Discover (themselves), Uncover (principles with experts), leading to the student’s new Knowledge. (More information on Needham’s honorary professorship and EDU-Kation.)

One of the goals of the visiting honorary professorship is to encourage new collaboration with the University of Nottingham’s pharmacy school, which is well on its way. Needham is already part of a new Engineering and Physical Sciences Research Council (EPSRC)-£5.4 million ($7.7M) grant entitled, "Next Generation Biomaterials Discovery,” which was recently awarded to the University of Nottingham.  He is currently writing new grant proposals to establish his single micro- and nano-particle science and engineering research techniques and methodologies at Nottingham University, aimed to enhance their efforts in new and advanced pharmaceutic designs and formulations. 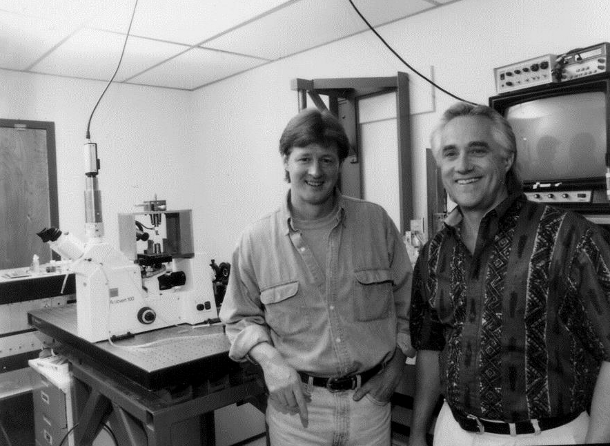 Williams told the graduation-assembly of how one of David’s mentors, Evan Evans, then of the University of British Columbia, had said of him, “David is a brilliant, intuitive scientist who runs to the lab and quickly assembles a simple experiment to reveal deep insights into the unknown complexity of whatever chemical concoction or colloidal soup that interests him! Moreover, he then senses the hidden opportunity to engineer some new advance in material science that aids human health and well-being (e.g. from "sighting devices" to aid downtrodden dart throwers in a pub to nano-drug delivery systems to cure cancer patients).”

Williams also provided a quote from Dewhirst, who, as his long-time colleague, said of David,“He has never taken a single piece of data at face value. He has always pushed to understand how an experiment was done –how to interpret results in light of his knowledge of biophysics. David has been tenacious in pushing the company to fulfill its obligations. David was the lone soldier doing battle. There is no doubt that his reluctance to accept defeat has contributed to their successes.”

Professor Williams closed his oration by saying, “David’s intuition, innovation and rigor in research, passion for education, and commitment to improve the health and wellbeing of society is something that we all look forward to benefitting from in the future.”

Needham responded during his address, appropriately entitled, “Lineage and Legacy” to the several hundred graduation students by giving credit for his success to those who had mentored him along the way. He also noted that he is now leaving his own legacy, passing on the lineage to his students, postdocs and colleagues, and administrators. He ended by encouraging the new graduates to remember their own teachings and the mentors to recognize their own efforts.

“So as you leave here today, reflect just briefly on your mentors, what they may have said in passing, their advice, generosity, and methodology of how to behave in your chosen profession or in research and development if some of you are heading in that direction. And to the mentors, do take the time to reflect on your own legacy, they are sitting here right in front of you.”