More to Lightning Than Meets the Eye

There’s much more to a lightning bolt than meets the eye, and engineers at Duke University have invented an improved way of tracking these hidden phenomena.

There’s much more to a lightning bolt than meets the eye, and engineers at Duke University have invented an improved way of tracking these hidden phenomena.

When a bolt of lightning flashes through the open air, less than 10 percent of the total electrical activity is visible. The rest is hidden from view within different layers of the cloud extending for miles through the storm. 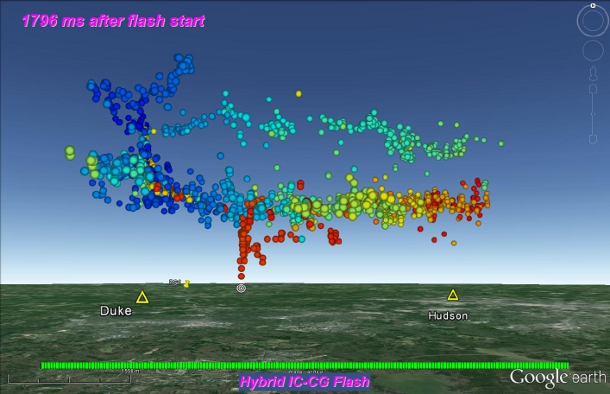 To study an electrical storm’s internal wiring, researchers watch for either Very High Frequency (VHF) waves caused by the breakdown of air in front of a bolt’s path or radio waves produced by the movement of electrons. While previous studies have shown that these two processes happen nearly simultaneously, finding the exact time interval between them has proven challenging. 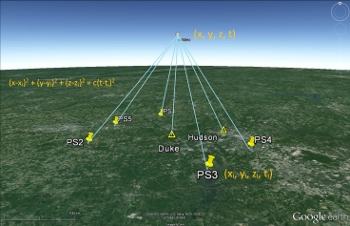 But it’s a challenge that researchers at Duke’s Pratt School of Engineering are up to. Steve Cummer, professor of electrical and computer engineering, along with postdoctoral associate researcher Fanchao Lyu, have devised a ground sensor system and data processing system that can track the sources of radio wave emissions with more precision than ever before.

Lyu tested the system during a thunderstorm moving over Durham, NC, in June 2014. Besides two permanent sensors stationed in Duke Forest and Hudson Hall, Lyu and his colleagues created a network of five mobile sensors 10 miles apart by carrying them in the trunks of cars, parking, setting them up and powering them through cigarette lighter outlets.

The system works by cross-correlating radio wave signals from two stations during a 350-microsecond window to determine the difference in the waves’ time of arrival. The time window is then slid 50 microseconds and the process is repeated. 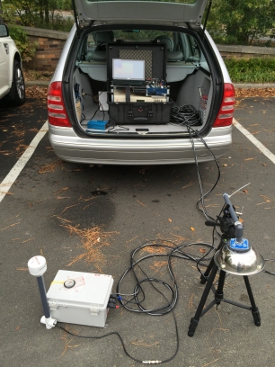 Because the radio waves travel at the speed of light, the difference in time it takes them to reach each sensor is extremely small—but it is detectible. That difference constrains the point from which the waves could have originated. And after getting time-of-arrival differences from all of the stations for a single event, the source of the radio waves can be pinpointed.

While this method has been used before, the number of sensors being used and the way the data is processed makes Duke’s system more sensitive than any previously deployed, giving good mapping results on both continuous emissions and fast processes within the cloud. The tracking allowed Lyu to image more processes during a lightning strike than ever before, providing a more complete image of the event by radio signals.

The new system also allowed Lyu to create extremely detailed visualizations of even the fastest processes of a lightning bolt. Watch below as a single discharge nearly two seconds long spans an area more than 16 miles wide over Duke University.

“Lightning is still a kind of mystery even after a century's study,” said Lyu. “Our new development of this system enables us to map a more complete image of lightning radio emissions than ever before, which should help us be able to understand more about its processes.”