Michael Lynch, an expert in genetic engineering and using microbes to produce useful chemicals, has joined the Department of Biomedical Engineering at Duke University as a tenure track assistant professor, effective November 1. Previously the founder and chief science officer at OPX Biotechnologies, Inc., Lynch will continue his research into engineering microbial metabolism to be useful in a variety of applications.

Modern science uses microbes for everything from converting plant matter into biofuel to mass-producing pharmaceutical drugs. Lynch wants to build a standardized system that optimizes these processes and spans the range of industrial microbial applications. His innovation involves allowing microbial cultures to grow at industrial scales as quickly as possible before using genetically engineered pathways to shut down growth and channel all the microbes’ energy toward product formation. 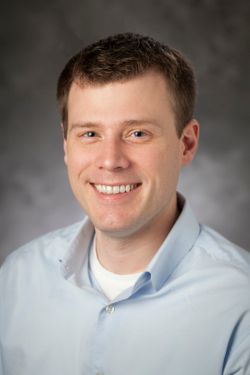 “The yeast that ferment sugars for wine and beer are producing ethanol through metabolic processes that are needed to keep them alive and growing,” said Lynch. “Only looking into processes that are required for life or growth is very limiting. We are engineering dynamic metabolic control. Once the microbes are grown, we can change their metabolism on demand, stop growth and do a variety of things. We are no longer limited to processes required for growth.”

Lynch and his research team are focusing on four major applications: bioenergy, chemicals production, new pharmaceuticals and the microbiome—the trillions of microbial cells that live in and on every person in the world.

In the bioenergy arena, Lynch currently has a project running to convert methane or natural gas into longer-chain fuels and higher value chemicals. The idea is to understand the best-case scenario for biofuels—how good could they ever be? For chemicals production, the process is being tailored to specialty and commodity chemicals; renewable sugars or other feedstocks can be converted into plastics, clothing or other consumer products.

Another exciting application is using microbes to produce new potential pharmaceuticals derived from natural sources such as plants. “We hope to rapidly produce enough of these interesting potential drugs to better understand how they work and identify new clinical candidates more quickly,” said Lynch.

And in the microbiome arena, Lynch is engineering microbial cells to effect changes in our body’s microbial makeup. “We’re looking at everything from well-understood, near-term adjustments to microbial populations to blue-sky dreams like engineering skin microbes to make sunscreen molecules,” said Lynch.

Before beginning this line of research and co-founding OPX Biotechnologies, Lynch earned an undergraduate degree in anthropology as well as an undergraduate and master’s degree in biomedical engineering from Washington University in St. Louis. He then completed a dual MD/PhD program at the University of Colorado.

His thesis involved work to better understand microbial biofilms and antibiotic resistance. Along with his advisor, Lynch helped develop tools to rapidly dissect how bacterial populations work and how cells respond and evolve. Those tools opened the door to his current research and the founding of OPX Biotechnologies in 2007.

In 2012, Lynch left the company to focus on the career path he would have followed had the start-up opportunity not presented itself.

“At the end of my tenure at OPX, I spent a lot of my time not doing science,” said Lynch of his decision to leave. “I figured the farther down that road I went, the harder it would probably be to get back into basic research.”

Eric Toone, vice provost and director of the Duke Innovation and Entrepreneurship Initiative, was a colleague of Lynch’s and invited him to visit campus. After a couple of trips, Lynch was hooked. Initially joining the biomedical engineering department in 2012 as an assistant research professor, Lynch recently accepted a tenure-track assistant professorship and will begin mentoring graduate students.

“Duke is a great fit for me because there are programs like the Energy Initiative that have allowed me to work on topics with which I have recent history and expertise, while also enabling me to return to more intensive biomedical research,” said Lynch. “Looking back at my ambitions before starting the company, I wanted to focus on medical applications. And here at Duke, that’s a huge part of what happens in the biomedical engineering department. With the medical school so close, you can’t help but bump into people who want to do medically relevant research. It’s impossible to avoid.”