Radio waves reveal person’s presence in a room, even beyond the sensor’s line of sight 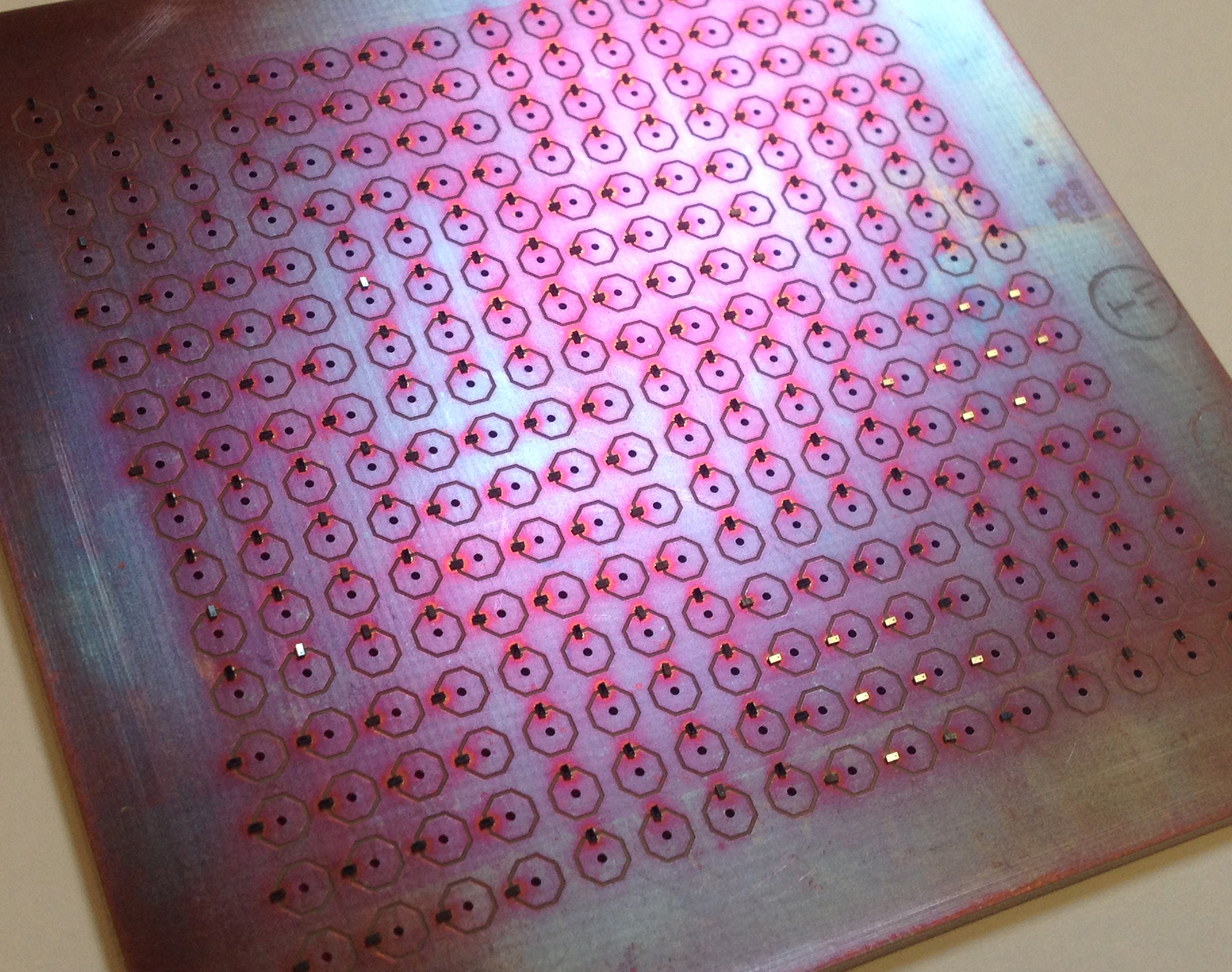 Relief may be on the horizon for anyone who has ever jumped around a room like a jack-in-the-box to get motion-sensing lights to turn back on. A new motion sensor based on metamaterials is sensitive enough to monitor a person’s breathing.

In a pair of new studies, researchers from Duke University and Institut Langevin, France, have shown that patterns made by radio waves can detect a person’s presence and location anywhere inside a room.

The findings appeared recently in Scientific Reports and Aug. 6 in the Physics Review Letters.

“Energy companies don’t love infrared motion detectors because they have lots of problems,” said David R. Smith, the James B. Duke Professor of Electrical and Computer Engineering at Duke. “The amount of space they can cover is limited, a person has to be within their line of sight to be detected, and probably everyone has had the experience where the lights have gone off because they’ve sat still for too long. Radio waves can get around all of these limitations.”

In their initial paper published earlier this year, the researchers took advantage of patterns created by radio waves bouncing around a room and interfering with themselves. These unique patterns change with the slightest perturbation of the room’s objects, allowing a sensitive antenna to detect when something moves in or enters the room. And by comparing how these patterns change over time, they can also be used to detect cyclical movements like a fan blade turning—or even a person breathing.

In the latest paper, the team shows that with a bit of training, the system can also extract information necessary to locate objects or people in a space. The demonstration system was taught the pattern of radio waves scattered by a triangular block placed in 23 different positions on a floor. That calibration is enough not only to distinguish between the learned 23 scenarios, but to also distinguish the positions of three identical blocks placed in any one of 1,771 possible configurations.

The technology works by taking advantage of the way radio waves behave in an enclosed room. Their ability to continuously reflect off multiple surfaces creates complex interference patterns throughout a room. In the past, this complexity has been an obstacle for systems trying to locate the origin of a signal. But Smith and his colleagues have now shown that this same complexity can be tapped to detect movement and locate objects within a room. 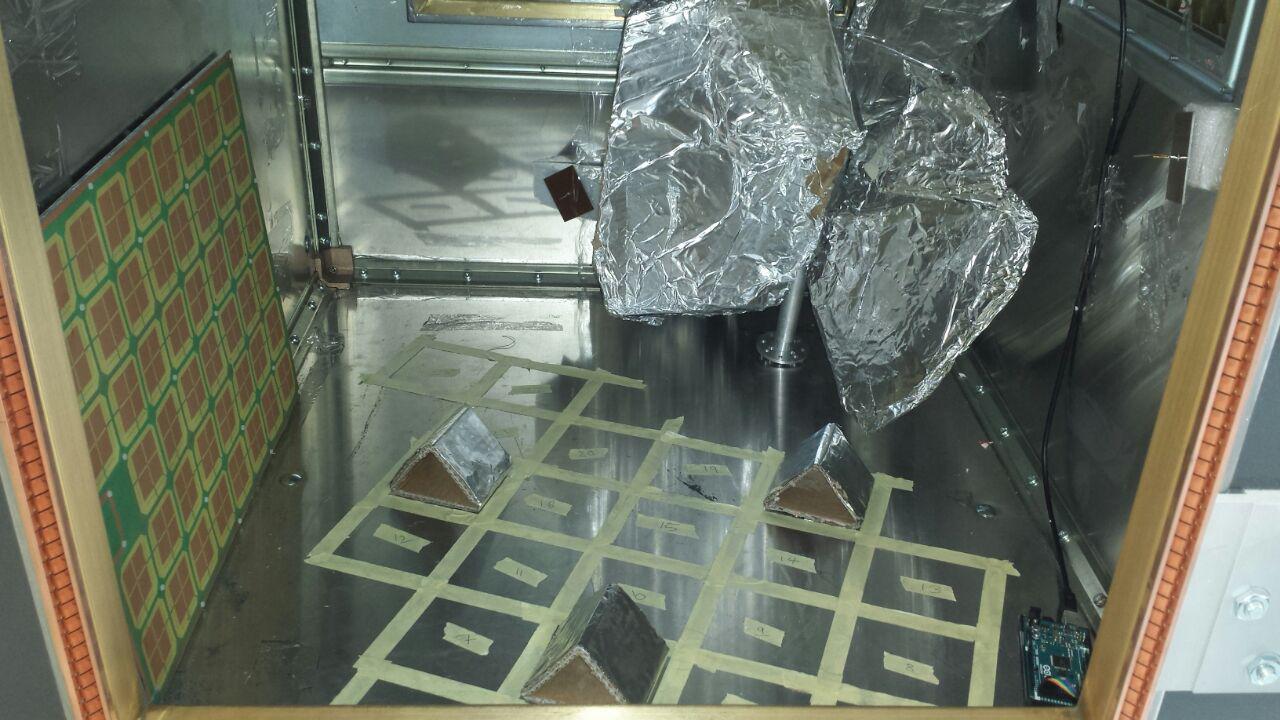 “The complexity of the way radio waves bounce around a room and interfere with themselves creates a sort of fingerprint,” explained Philipp del Hougne, a researcher visiting Smith’s laboratory from Institut Langevin in Paris, France. “And each time an object within a room moves, even a little bit, that fingerprint changes.”

The challenge lies with finding the most efficient way to ink that fingerprint in the first place. It requires a lot of information, del Hougne explained, and there are multiple traditional ways it can be done, but they all have drawbacks.

A large number of antennas could be installed in many places around a room to take multiple measurements, but this would be costly and inconvenient. Another tactic would be to measure many different frequencies, as each bounces around a room in a unique way. This approach, however, would likely create interference with other radio wave signals like Wi-Fi and Bluetooth operating within a room.

The researchers’ solution is to dynamically control the shape of the waves using metamaterials—artificial materials that manipulate waves like light and sound through properties of their structure. A flat-panel metamaterial antenna can shape waves into arbitrary configurations and create many different wave fronts in rapid succession.

“It doesn’t even matter what those particular wave shapes are,” said Smith. “As long as they’re diverse, the detector will pick up enough different patterns to determine if something is there and where it is.”

“There are other technologies that could achieve similar wave front shaping capabilities, but they are much more expensive both in cost and energy usage,” said Mohammadreza Imani, a postdoctoral fellow in Smith’s lab who also worked on the papers. “Studies have shown that the ability to adjust a room’s temperature when people leave and come back can reduce power consumption by around 30 percent. But if you’re trying to save energy by spending more energy changing the antenna pattern, then you’re not helping.”

And energy savings may be just the tip of the iceberg. The ability to count the number of people in a room, distinguish body positions and monitor breathing patterns also has potential applications in security, healthcare and gaming.

The French scientists on the project have created a related startup company called Greenerwave.

“While we’re definitely still continuing with the energy angle, we’ll also see where the research takes us,” Smith said.