Investing in Duke Engineering: The Lord Foundation of North Carolina

Since 1984, the Lord Foundation of North Carolina has given $47 million to advance Duke Engineering teaching and research 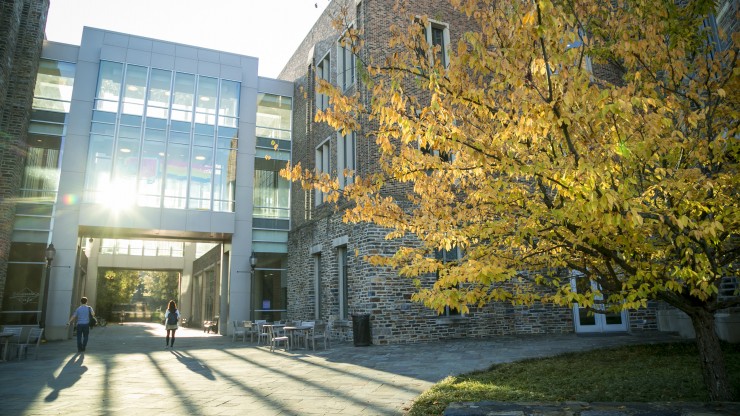 From first-year students learning the fundamentals of engineering design to senior faculty pursuing new possibilities in quantum computing, tissue repair and solar energy, it’s hard to think of a person or program at Duke Engineering today that hasn’t been touched in some way by a gift made almost four decades ago.

The Lord Foundation of North Carolina (LFNC), established in 1984 to promote excellence in research, teaching and student programs in engineering and related disciplines at Duke, has contributed more than $47 million to advance those goals over the years. The funding has supported the launch of nationally recognized educational programs, state-of-the-art research facilities to attract top faculty and enhance graduate training, and a host of hands-on learning experiences for engineering students.

“Duke Engineering has been on an incredible upward trajectory across nearly every measure in recent years, and the Lord Foundation has provided a significant boost to our success,” said Ravi V. Bellamkonda, Vinik Dean of Engineering. “By providing a reliable source of funding over nearly four decades, the foundation has expanded our capacity to grow, pursue exciting new ideas and offer our students the kinds of personalized learning experiences that have come to define a Duke Engineering education.”

In recent years, LFNC has awarded more than $1.5 million annually to support wide-ranging initiatives across Duke Engineering, from undergraduate research opportunities in the Duke Smart Home to high-tech equipment for newly hired faculty starting up their research labs (see slideshow). In addition to these awards totaling over $29 million since 1985, the foundation contributed $18 million in the early 2000s to support expanding and modernizing the Pratt School of Engineering’s space for research and teaching.

LFNC is one of four Lord Foundations established in the 1980s by the late Thomas Lord, chairman of the board of the privately held Lord Corporation. Also benefitting are the Cleveland Clinic Foundation, the Massachusetts Institute of Technology and the University of Southern California.

With the acquisition of the Cary, N.C.-based LORD Corporation by Parker Hannifin, the foundations shared a distribution of more than $1 billion from the proceeds of the sale, leading to a distribution of approximately $261 million each to Duke, Cleveland Clinic, MIT and USC.

In addition to supporting engineering education and research and undergraduate financial aid, the new funds will enable the Pratt School of Engineering to continue the annual program awards previously provided through LFNC.

From Trolley Cars to 21st-Century Tech

A History of the Lord Foundation & Duke Engineering

A member of Duke Engineering’s Board of Visitors, Alstadt saw both encouraging strengths and great potential in the ambitious young university. As he explained in a 1985 column for DukEngineer Magazine, “Duke is on its own fast track....[it is] sitting on the threshold of becoming a world-class university.”

On April 24, 1984, The Lord Foundation of North Carolina was established with a gift of stock holdings worth approximately $40 million.

As then-dean Earl Dowell recalls, “The engineering school’s total endowment when I arrived was $2 or $3 million, so this foundation endowment was far and away larger than any gift the school had ever received. The dividends over the years had a very significant impact on the school and vastly expanded what we could do.”

Since 1985, Duke Engineering has grown to include 1,260 undergraduate and 1,280 graduate students, with more than 15,000 alumni worldwide. The Pratt School is currently ranked No. 18 among U.S. engineering colleges by U.S.News & World Report, with a biomedical engineering program ranked No. 3 and environmental engineering No. 10.

“Duke Engineering has been on an incredible upward trajectory across nearly every measure in recent years, and the Lord Foundation has provided a significant boost to our success.”