Named one of MIT Technology Review’s “35 Innovators Under 35” and one of Popular Science’s “Brilliant 10,” Viventi designs new flexible electronics that shrink sensors and simplify wiring, paving the way for a leap forward in brain-computer interfaces.

Jonathan Viventi will join the biomedical engineering department in Duke University’s Pratt School of Engineering in November 2014. After helping to develop the technology behind 4G cellular networks, he decided to use his knowledge of advanced wireless and electronic devices to try to tap into a much faster network—the human brain. 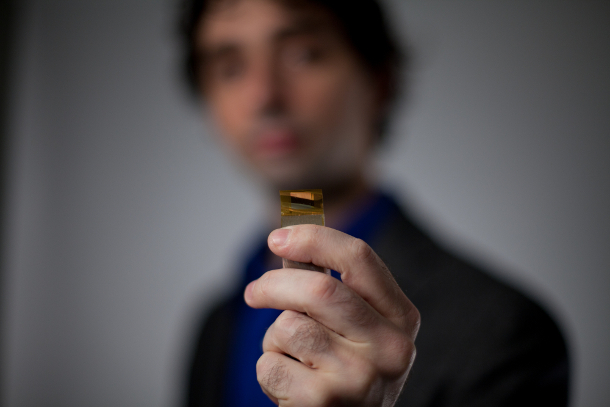 For the past several decades, the technology that allows researchers to connect to and monitor human brain function has not changed much. Electrodes are individually, painstakingly wired to separate electronics sitting far away inside a piece of recording equipment. The sheer volume of wiring in a constrained space limits most devices to around 100 sensors. Although getting up to 256 is possible, scaling up to thousands is not.

To push the field forward, Viventi has developed flexible electronics that require a fraction of the wiring of past systems and dramatically increase the number of sensors researchers can deploy. 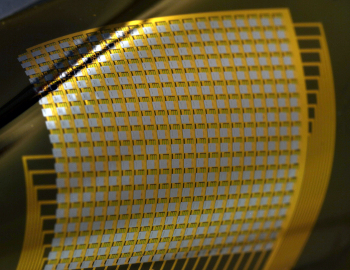 “It’s like the difference between a piece of two-by-four lumber and a sheet of paper,” explains Viventi, who comes to Duke from New York University. “They are both made out of the same material, but have dramatically different physical properties. We’ve done the same thing with silicon, which is normally brittle and inflexible. But, by making silicon very thin—just 300 nanometers thick—we can make it extremely flexible.”

Viventi has taken this thin, flexible version of silicon electronics and embedded it into a thin sheet of plastic to create an array of 360 sensors that requires only 39 wires. He hopes to scale the technology to thousands of sensors across a much larger area to give researchers a much finer picture of the electrical activity in the brain.

Once that’s accomplished, a lot of cool things can start to happen.

For example, Viventi wants to monitor the brain’s electrical activity just before a seizure in fine resolution. By characterizing the patterns of waves that move across the brain just before a seizure, he hopes to predict them in real time and use his technology as a sort of neural pacemaker to stop seizures before they start. 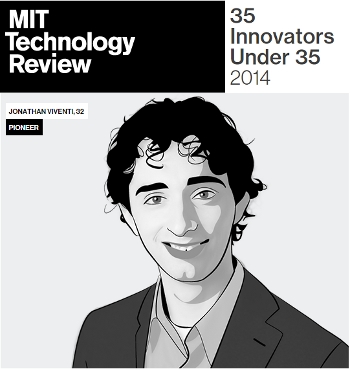 Another avenue of research involves motor and auditory prosthetics. Viventi hopes his technology can extract enough information from an animal’s motor cortex to allow it to control a prosthetic device like a robotic limb, computer cursor or wheelchair just by thinking about it. While similar systems already exist, they have limitations.

“The control of a robotic arm through a neural interface is currently slow and unreliable,” said Viventi. “We’re interested in seeing if we have 1,000 sensors on the brain—or 10,000, for that matter—whether or not we can dramatically improve the performance of these sorts of devices.” 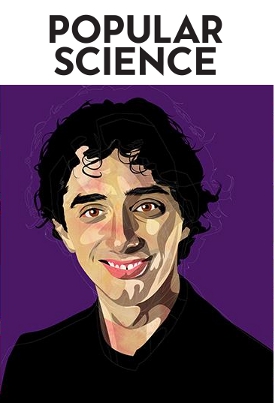 Similarly, in auditory prosthetics, Viventi wants to use the same sensor technology to both record and stimulate the brain. A detailed neural sensor, for example, could help fine-tune the inputs of a cochlear implant. Or perhaps the sensor array could even inject the perception of sound back into the brain of a deaf person by electrically stimulating the surface of their brain.

Whatever the goal—diagnosing and heading off epileptic seizures or revolutionizing prosthetic devices—Viventi says there is no shortage of potential collaborators at Duke.

“Here, we have a world-class medical center right next door to the engineering school,” said Viventi, who also fits in well with Duke’s entrepreneurial spirit, having co-founded a company that produces electronics for modifying racecars called N2MB Racing. “It’s amazing to have everyone in the same place. There’s a critical mass of people here who are working on similar challenges in neuroengineering, and my lab will benefit from their expertise.”