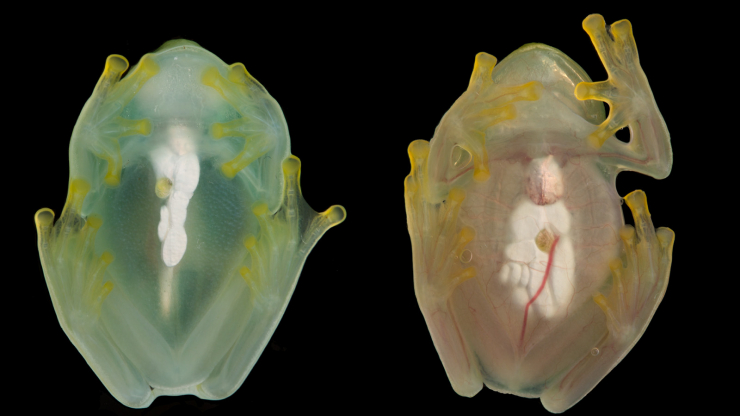 Glassfrogs make themselves transparent while they rest by taking red blood cells from circulation and concealing them in their livers. A multi-university team of biologists and biomedical engineers has shown how these frogs make themselves see-through in research that appears December 23 in the journal Science.

It’s easy to miss a glassfrog in its natural environment. The northern glassfrog, Hyalinobatrachium fleischmanni,measures no more than a few centimeters, and they are most active at night, when their green skin helps them blend in with the surrounding leaves and foliage. 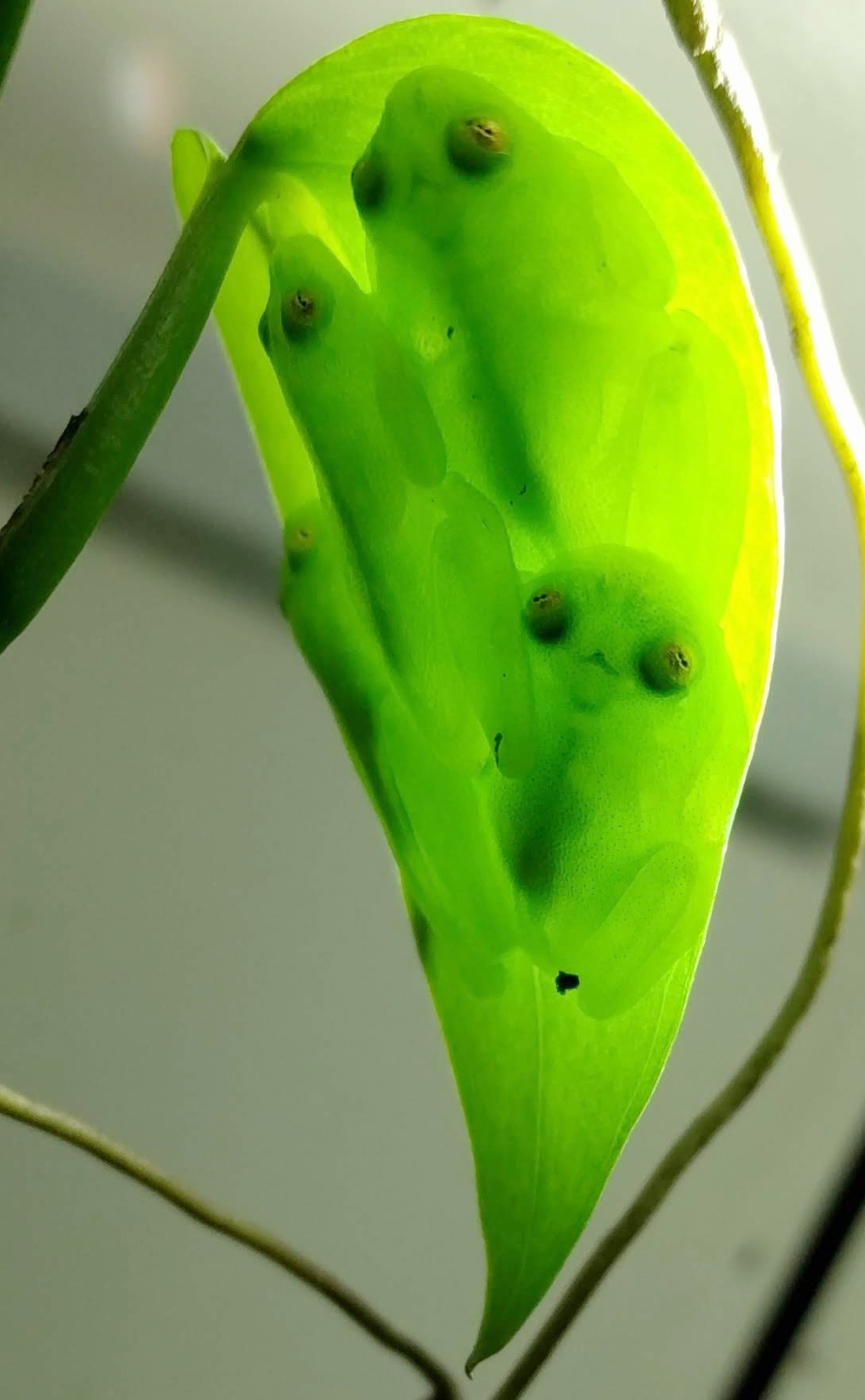 But these amphibians become true masters of camouflage during the day when they’re asleep.

“When glassfrogs are resting, their muscles and skin become transparent, and their bones, eyes and internal organs are all that’s visible,” said Carlos Taboada, a post-doctoral fellow at Duke and a co-first author of the paper. “These frogs sleep on the bottoms of large leaves, and when they’re transparent, they can perfectly match the colors of the vegetation.”

Many animals in the sea can change the color of their skin or become completely transparent, but it’s a far less common skillset on land. One reason transparency is so difficult to achieve is because of red blood cells in the circulatory system. Red blood cells are adept at absorbing green light, which is the color of light usually reflected by plants and other vegetation. In return, these oxygen-rich cells reflect red light, making blood –– and by extension the circulatory system –– highly visible, especially against a bright green leaf.

Glassfrogs are some of the only land-based vertebrates that can achieve transparency, which has made them a target for study. Taboada first began studying glass frogs as a post-doctoral fellow in the lab of Sönke Johnsen, a professor of biology at Duke who specializes in studying transparency. Working with Jesse Delia, who traveled around the world collecting different glassfrogs for the study, they observed that red blood cells seemed to be disappearing from the circulating blood whenever the frogs became transparent.

They conducted additional imaging tests on the animals, proving via optical models that the animals were able to achieve transparency because they were pushing red blood cells out of their vessels. He suspected that the cells were being stored in one of the frog’s inner organs which are packaged in a reflective membrane.

For a see-through animal, its biology was shockingly challenging to decipher. The research drew on the expertise of biologists and biomedical engineers not only at Duke but at the American Museum of Natural History, Stanford University and the University of Southern California.

“If these frogs are awake, stressed or under anesthesia their circulatory system is full of red blood cells and they are opaque,” explained Delia, now a post-doctoral fellow at the American Museum of Natural History. “The only way to study transparency is if these animals are happily asleep, which is difficult to achieve in a research lab. We were really banging our heads against the wall for a solution.”

But Taboada had learned about an imaging technology called photoacoustic microscopy, or PAM, when he was studying biliverdin, the compound that gives certain species of frogs their signature green color. PAM involves shooting a safe laser beam of light into tissue, which is then absorbed by molecules and converted into ultrasonic waves. These sound waves are then used to make detailed biomedical images of the molecules. The imaging tool is non-invasive, quiet, sensitive and, in a stroke of luck, available at Duke.

“PAM is the ideal tool for non-invasive imaging of red blood cells because you don’t need to inject contrast agents, which would be very difficult for these frogs,” explained Junjie Yao, an assistant professor of Biomedical Engineering at Duke who specializes in PAM technologies. “The red blood cells themselves provide the contrast, because different types of cells absorb and reflect different wavelengths of light. We could optimize our imaging systems to specifically look for red blood cells and track how much oxygen was circulating in the frog’s bodies.”

In their imaging set-up, the frogs slept upside down in a petri dish, similar to how they would sleep on a leaf, and the team shined a green laser at the animal. The red blood cells in the frog’s body absorbed the green light and emitted ultrasonic waves, which were then picked up by an acoustic sensor to trace their whereabouts, with high spatial resolution and high sensitivity.

The results were startlingly clear: When the frogs were asleep, they removed nearly 90 percent of their circulating red blood cells and stored them in their liver. 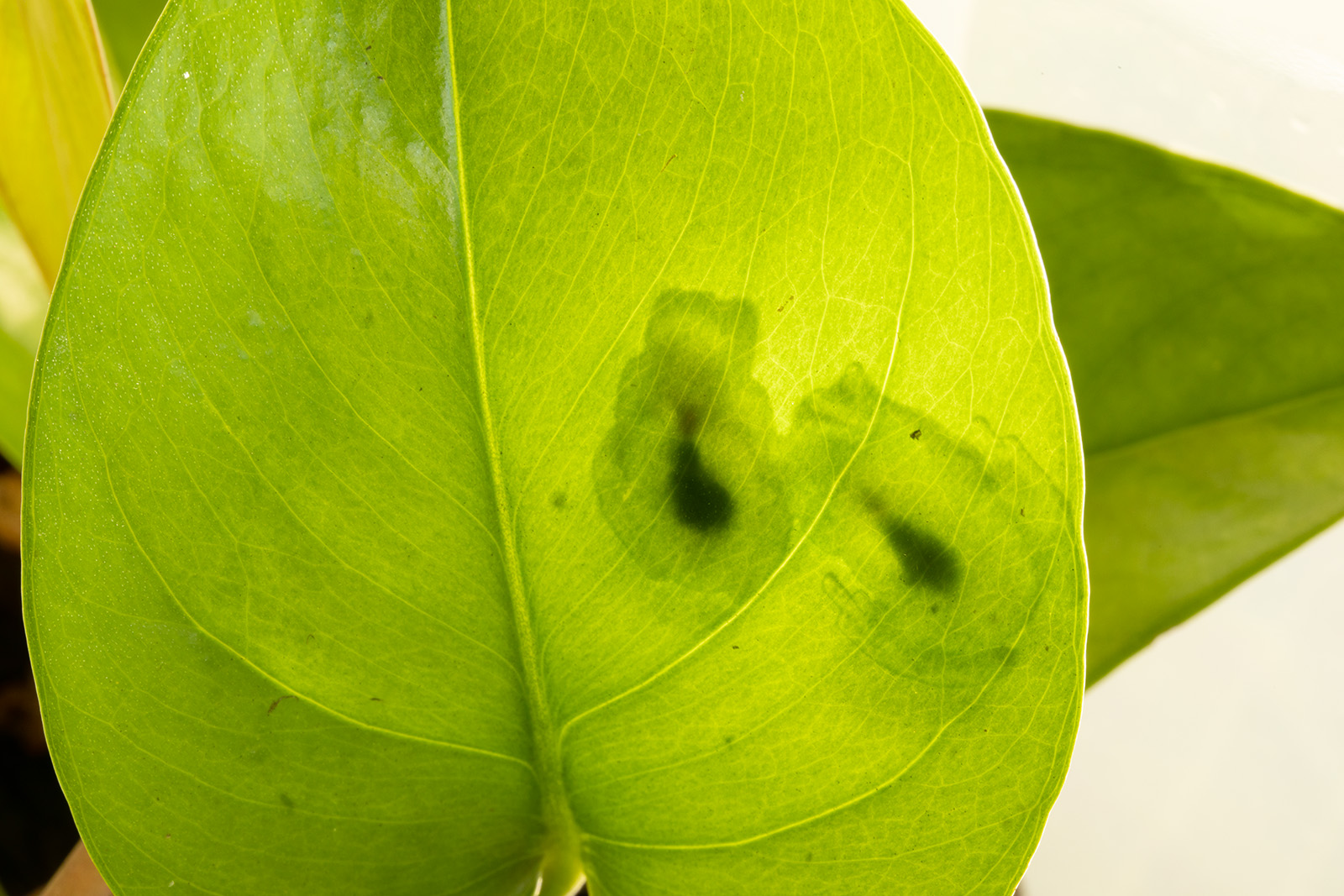 In further tests, the team also saw that red blood cells flowed out of the liver and circulated when the frogs were active, and then re-aggregated in the liver while the frogs were recovering.

“The primary result is that whenever glassfrogs want to be transparent, which is typically when they're at rest and vulnerable to predation, they filter nearly all the red blood cells out of their blood and hide them in a mirror-coated liver -- somehow avoiding creating a huge blood clot in the process,” said Johnsen. “Whenever the frogs need to become active again, they bring the cells back into the blood stream, which gives them the metabolic capacity to move around.”

According to Delia and Taboada, this process raises questions about how the frogs can safely store almost all their red blood cells in their liver without clotting or damaging their peripheral tissues. One potential next step, they said, could be to study this mechanism and how it could one day apply to vascular issues in humans. 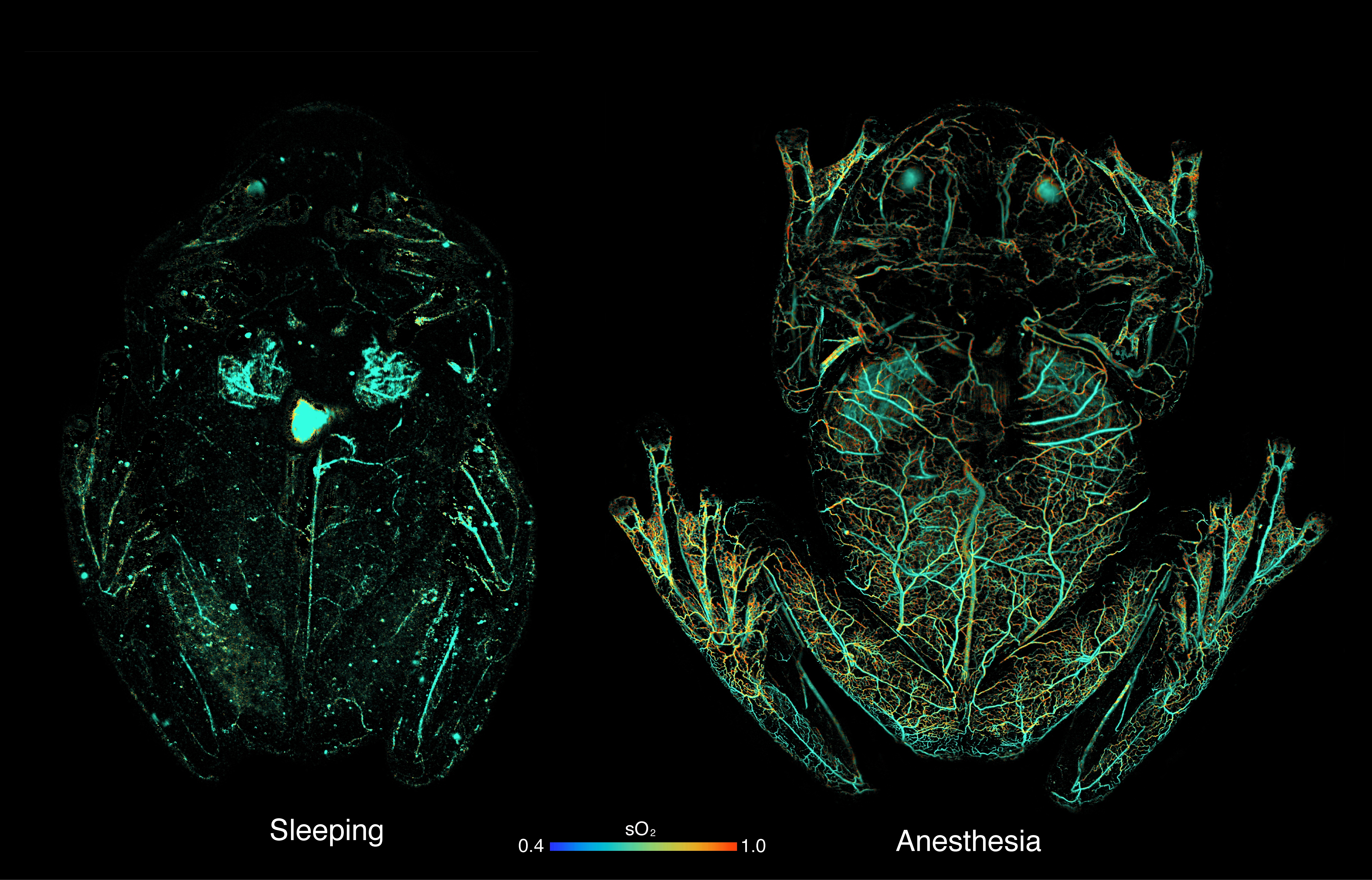 This work also introduces glassfrogs as a useful model for research, especially when paired with the state-of-the-art photoacoustic imaging. As long-time glassfrog researchers, they are excited about the new avenues of study now available to them and interested collaborators.

“We can learn more about the glassfrog’s physiology and behavior, or we can use these models to optimize imaging tools for biomedical engineering,” Delia said. “This started because Carlos and I thought this frog was doing something weird with its blood, and it led to productive collaborations both at Duke and across the globe.”

“Our successful collaboration has been a great example of how multiple disciplines can jointly advance science in the most synergistic way,” said Yao. “We are extremely excited about the future interactions between the biology and engineering teams. With all the strength on board, the sky is the limit.”