A team of researchers, engineers and software developers from Duke University and the Duke Medical Center has introduced a free iOS app to learn more about autism in young children living around the world.

Beginning Thursday, a ResearchKit app called “Autism & Beyond” is being offered from the Apple App Store for use on iOS devices. ResearchKit is a new open-source framework developed by Apple that allows researchers to create app-based studies with a global reach. 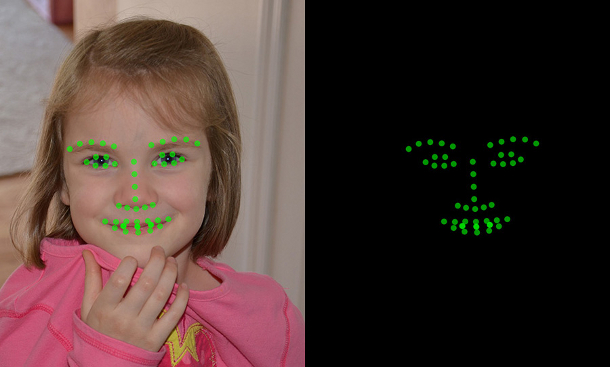 The free program from Duke is not a diagnostic tool. It is intended to test the reliability of smart phone questionnaires and video analysis of facial expressions as a possible screening tool for autism and other developmental disorders of children. 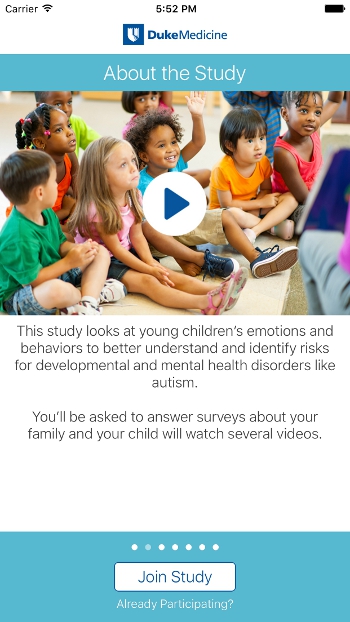 Parents and children will interact with questionnaires and videos on the app and then receive some feedback, such as how to deal with tantrums if that’s an issue, or what the child’s apparent risk for autism might be. In some cases, families will be encouraged to seek further consultation with their health care providers.

“You can’t diagnose a child with a video screen,” said Helen Egger, M.D., chief of Duke’s Division of Child and Family Mental Health and Developmental Neuroscience and a co-leader of the research team. “We’re interested in getting to a place where we could use the data we’re collecting to give individual advice. But we’re not there yet.”

“Our goal is to develop a screening, like hearing or eyesight at schools,” said Guillermo Sapiro, Ph.D., a professor of electrical and computer engineering, biomedical engineering and computer science. “They don’t get glasses; they get a referral.”

The app was developed over four months of intense work by a large team of Duke programmers, scientists and students who worked in close partnership with Apple. The team behind this app envisions developing related apps to study temper tantrums, picky eating and anxiety, Egger said.

With hundreds of millions of iPhones and iPads in use around the world, app-based health studies such as this enable researchers to measure more diverse patient populations faster and more affordably, said Ricky Bloomfield, M.D., director of mobile technology strategy for Duke Medicine. Patient recruitment and informed consent should also be easier through the devices, he said.

In addition to Egger, Sapiro and Bloomfield, the Autism & Beyond team has been led by Geraldine Dawson, Ph.D., director of the Duke Center for Autism and Brain Development and mathematician and engineer Robert Calderbank, Ph.D., who is director of the Information Initiative at Duke.

The app is intended for use with children ages 1 to 6. “Early detection of children with autism can help us intervene earlier, which greatly improves outcomes,” Dawson said. The Autism & Beyond app is a six-month study, with tests administered at the beginning, three months and six months. Each test takes about 20 minutes to complete.

After a guided set of screens that inform users of the purpose of the research and ask their consent to participate and share their data, the app combines questionnaires and short videos to gather information about a child.

Most of Duke’s innovation comes in the video portion of the app. As the child sits on the parent’s lap watching four short video clips, the device’s user-facing “selfie” camera records the child’s reactions to the videos, which are designed to make them smile, laugh and be surprised.

Analytical software in the app marks key landmarks on the child’s face automatically and assesses his or her emotional responses. For example, in a short video of bubbles floating across the screen, the video algorithm is looking for movements of the face that would indicate joy.

With permission from the app’s users, data captured by Autism & Beyond is uploaded to secure servers at Duke for analysis by the team. Users also have the option not to share video of their child, only the computer-generated facial landmarks. Duke is also hosting a website and hotline number for help. “We are trying to be overprotective,” Sapiro said.

The researchers stress that the goal of the app at this stage is to see whether it works well enough to gather useful data, not to provide at-home diagnosis.

Example of what children might see during a session with the new app.

"The goal is to see—based on things we already know from our research—whether these interactions elicit certain ephemeral behaviors in the child,” Egger said. A computer seeing at 30 frames per second, for example, can detect better than the human eye whether the child is slightly slower to smile, Egger said.

Automated analysis will also be much faster and cheaper than the labor-intensive analysis of video now done by trained people, Dawson said.

For now, study participants receive feedback on their child’s results on the questionnaires, and resources for coping with the challenges they may be experiencing, Egger said.

But in the long run, self-administered tests like this offer the promise of broader access to mental health screening. “It is simply not possible to train enough people to meet the need for early childhood diagnosis,” Egger said. “Seventy out of the 100 counties in North Carolina don’t have a child psychiatrist, for example. This may be the only way to get screening out to more people.”

The Duke team has been working with colleagues in China to roll out a Mandarin version of the app in the world’s most populous market. A team at the University of Cape Town in South Africa is eager to try the app, and a partnership is being established in Argentina to create a Spanish language version of the app for the North and South American Latino population, Sapiro said.

“We’re hoping this app will increase access to mental health and autism screening in different cultures around the world,” Egger said.