Designed for Women, by Women

In ECE capstone course, a team designs a smart sports bra in partnership with Garmin 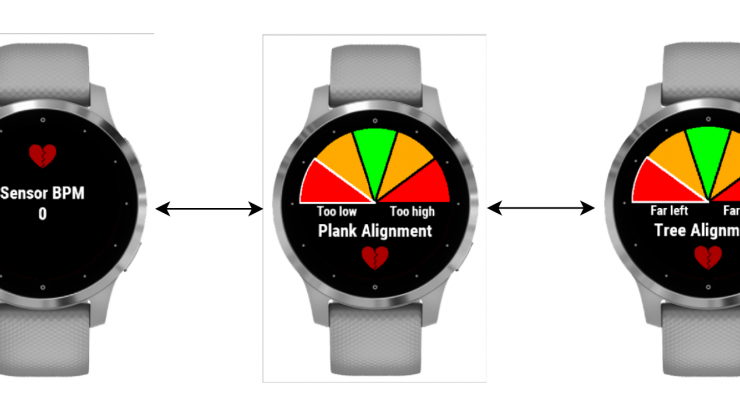 From Duke Engineering’s first capstone design class in wearables, led by electrical and computer engineering professor of the practice Rabih Younes, came an impressive collection of futuristic clothing and accessories: construction work gloves that use sensors to detect studs and live wires, a shirt that vibrates with varying intensity to help people with visual impairments sense how far they are from obstacles, and a boot with automated heating/cooling and inflation/deflation capabilities, to aid treatment after a foot or ankle injury.

Another team took on a real-world client: Garmin, a leading designer and manufacturer of GPS products whose product lineup includes a large array of wearable fitness trackers. The team of three women—Samantha Archer, Sarah Bland and Mary Stuart Elder—all describe themselves as athletic and belong to the segment of potential customers who might buy and wear fitness trackers with extra features, like heart rate monitoring.

The thing is, heart rate monitors are most accurate when placed on your chest, but nothing currently on the market seemed to meet women’s needs. “What we found was that none of us were enticed by the chest-based heart rate monitor that many companies offer—it’s not comfortable for women to wear a sports bra that’s already tight, and then have to fit the monitor underneath it,” said Archer.

The team decided to focus on turning a sports bra into a comfortable, accurate fitness tracker.

When the team decided to focus on turning a sports bra into a comfortable, accurate fitness tracker, Garmin asked them to meet two broad goals: prove that the form factor of a chest-based monitor could work to monitor heart rate accurately, and add a new feature that would be compatible with Garmin’s existing product line.

The team surveyed more than 60 women to see what kinds of features they were most interested in. Some of them, like cadence monitoring and running dynamics, were already included in Garmin products. One—posture detection—wasn’t, and the team thought they could achieve it by adding an accelerometer.

They designed a sensor array mounted on a silicone band, which attaches securely to the wearer’s bra with magnets, and named the product “Heartbreakers,” which Elder said imbued the product with a sense of empowerment. (It also gave the team a chuckle to have hidden "her bra" in the name of the product .) But they were challenged to make the wireless communication work between the sensor and the Garmin interface.

“The watches need a very specific type of wireless communication, to allow our product to talk to their watch,” explained Elder. “It was very different from using something like an Arduino, which is ready to be used out of the box and has numerous libraries to reference.”

Students and professors alike had to figure out how to work within the new parameters mandated by physical distancing.

Thankfully, the team solved most of its  communication issues before spring break—a time that will be remembered by many students, especially graduating seniors, as both a line of demarcation separating “normal life” from an extended period lived mostly at home, and a time of intense reorganization, when students and professors alike had to figure out how to work within the new parameters mandated by physical distancing.

For Bland, it meant cutting a road trip short to return to retrieve the team’s box of physical components from campus before access was curtailed and adopting a new role within the team: hardware lead, a role that had originally belonged to Archer. Tri-weekly Scrums moved to Zoom, and the team relied on Git to allow everyone to work on the coding aspect of the project from her own space. With technical support from Archer and Elder, Bland poured silicone and tested the prototype from her new lab—her Houston kitchen.

With technical support from Archer and Elder, Bland poured silicone and tested the prototype from her new lab—her Houston kitchen.

During the team’s final virtual presentation to the Garmin team, the students showed how the product they had designed could attach securely to the bra and continue to work during a period of sustained movement. Additionally, they demonstrated that the accelerometer-based posture monitor they had added to meet Garmin’s Goal 2—added functionality—could work to give the user feedback on her posture as she completed one of two yoga poses. 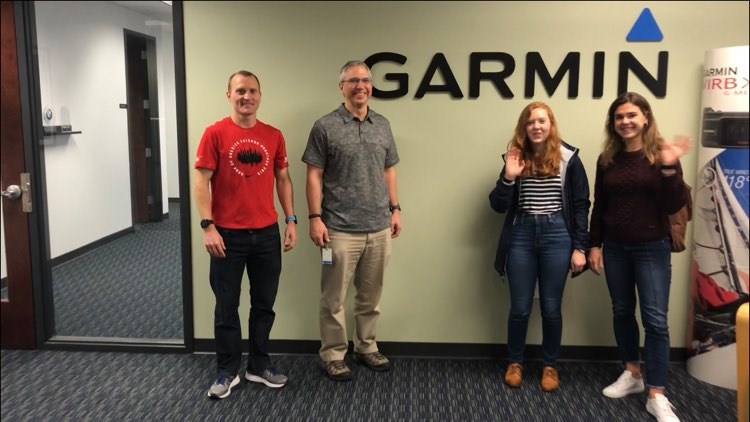 “It’s a proof of concept, the idea being that posture detection could be added to any exercise that Garmin currently supports,” said Archer. “A user could download an exercise routine to her watch and get feedback to improve her posture as she completes it.” Younes noted that the functionality could also be a good fit for applications like physical therapy.

“They certainly exceeded my expectations,” said Software Engineering Team Leader Travis Jones, who was the Duke’s team’s main point of contact at Garmin. “I thought their project was an ambitious one and that the likely outcome was separate components that worked but needed to be integrated. Even when working across three states, the team was able to put together a complete product that demonstrated the key principles of their vision.”

"Even when working across three states, the team was able to put together a complete product that demonstrated the key principles of their vision.”

All three women agreed that working on an all-female team to design a product specifically for women was a blast.

“There are fewer women than men in ECE, so it’s rare to work with all women in a project group like this,” said Archer. “Also, it was very cool that we got to implement something that we felt pretty motivated by—the fact that we were a team of women designing a product for women was something that we really enjoyed.  It was a once-in-a-Duke-career kind of opportunity.”

As seniors, the three students did not take the new first-year design course that is now required for all Duke engineers. “I’m going into software—I’m CS/ECE—so lots of times I don’t feel like a ‘real’ engineer because I don’t really build things. I’m mostly coding,” said Bland. “So it was neat to have the opportunity to build something with sensors and wires. I’m really happy that before I graduate I had the fulfilling experience of creating something from scratch.”

Undergrads Go the Distance to Design for Garmin