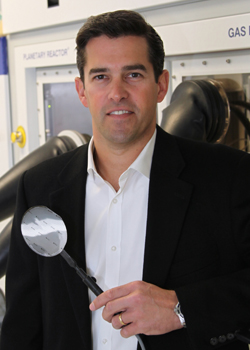 Chris Dries, E’94, PhD, is a serial entrepreneur who--after joining an indium phosphide startup business --sold it to begin anew with silicon carbide, an emerging material used for high voltage power conversion. He’s currently president and CEO of United Silicon Carbide Inc. and a member of the Pratt School of Engineering Board of Visitors.

"I appreciated that the professors at Duke are really invested in their students’ success."

Why did you choose electrical engineering as your field of study?

My father worked at the Naval Research Laboratory in Washington, D.C., so I grew up around oscilloscopes, infrared cameras and other hardware. Thanks to that early exposure, there was no doubt I was going to major either in physics or engineering of some sort. Since physics and electrical engineering are so intimately related, it wasn’t an easy decision.In my opinion, though, while both disciplines require that you learn much of the same material, electrical engineers get to really apply the science in an in-depth and focused way.

How did your time at Duke contribute to your eventual career path as an entrepreneur?

While I knew I loved the science, I didn’t really have a good idea of what an engineer did when I went off to college. Early on I thought I’d take the same route a lot of others at Duke were taking by going into consulting or project management, but then I met a lot of friends whose parents were entrepreneurs and it opened my eyes to a completely different path.

The social atmosphere at Duke was a lot of fun. The residential experience leant toward a very collaborative environment, and I learned a lot about how to interact with people and how business works. I developed useful personality traits and Duke’s environment fostered a lot of that.

How did you get to the point of starting your own companies?

It was really a bit of a random walk. I was interviewing for jobs at management consulting companies like Anderson Consulting and Bain my senior year and decided to apply to graduate schools on a whim. By the time spring rolled around, I had been accepted to Princeton with a fellowship. I was interviewing with Mitsubishi in Boston and told them about the offer, and they asked what the heck I was doing interviewing with them.

My advisor at Princeton was Steve Forrest, who was well-known in optoelectronics. He got his start at Bell Labs and had a strong entrepreneurial streak. While working with him I also met Greg Olsen, a very well-known entrepreneur in the Princeton area, and we’ve been working together ever since.

How did your scientific base in electrical engineering contribute to your career path?

My thesis was in lasers and detectors in indium phosphide, which is a semiconductor used in fiber optic communication systems. When I started my work, it was just about the time the World Wide Web was just starting to stretch its tentacles, and it was clear to me that all of the coming data traffic would have to go through fiber, and I wanted to be part of it.

As it turns out, I was right, and the business did well. We sold it in 2000, bought it back in 2002, and sold it again in 2005 to start a new challenge. I was looking for a new investment and learned about silicon carbide, which is the best material for power conversion at high voltages. It felt like the early days of indium phosphide. Materials scientists knew it was good for power conversion but it was just maturing, the substrates were just becoming high-quality, and the market was just developing. My engineering background allowed me to see what was on the horizon.

What was a transformative moment for you while at Duke?

Well, meeting my wife was certainly a transformative moment. But there are two others that are a testament to the professors at Duke that made a major impact on my life.

First, it was freshman year and I was under a lot of pressure. My parents had basically mortgaged their house to send me to Duke, so I was nervous going into my first electrical engineering exam. I thought I knew the information but when I got it back I had gotten a D. I sulked back to my dorm, looked at it and started going through it. I noticed that it was only a few silly arithmetic mistakes that propagated through the exam that were the reasons for the wrong answers. I took it back to the professor and talked it over with him and he changed it to an A-. Besides being a good learning experience, I appreciated that the professors at Duke are really invested in their students’ success.

The second event was during my senior year. I was taking a class from Bill Joines and waiting tables to try to make ends meet. I was in the middle of a week of closing the place down at 3:00 in the morning and was practically falling asleep during his class. Instead of yelling at me, he offered me a job working in his lab. It was huge. It saved my life senior year. The work turned into a little senior project, I got exposed to research, I earned more than I did at the restaurant and I slept a lot better at night.

How do you see electrical engineering at Duke now that you’re a member of Pratt’s Board of Visitors?

It’s just terrific. The school is so much stronger now academically and in terms of international reputation from when I was there. Dean Katsouleas has been spectacular. Every time I go down for a Board of Visitors meeting I’m excited to hear what they’ve accomplished in the previous six months. It’s a great environment for students to learn in, and they’re keenly interested in innovation and entrepreneurship.

Any advice for future entrepreneurs?

This goes against how a lot of people feel these days, but I think students interested in entrepreneurship should get a job first or work with someone else who already owns a business before striking out on their own. They may think they have an idea that’s so good that it has to be pursued immediately, but becoming the next Mark Zuckerberg or Elon Musk is like getting struck by lightning. More often than not, experience and great mentors are the keys to success. There are a lot of basic things you have to learn before doing your own thing. Even if they miss out on their idea, there’s always another one right around the corner.