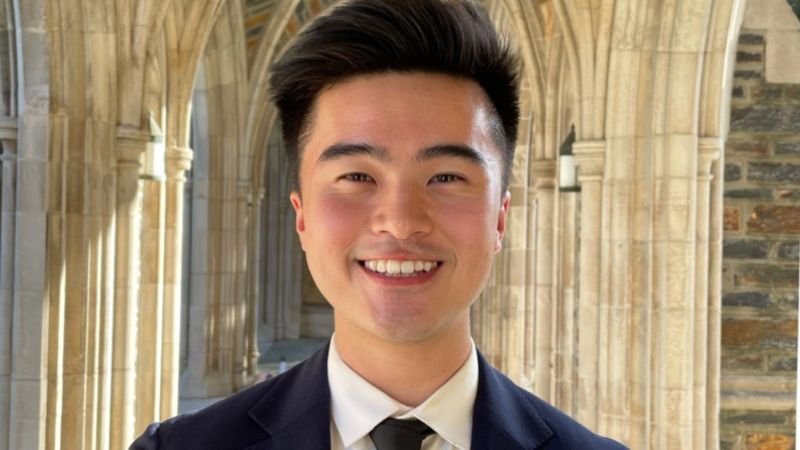 For Michael Tian, the Pratt Fellows program offered a perk that was too enticing to pass up: a chance to pursue an independent research project

Although many biomedical engineering students at Duke typically wait to join a lab until their junior or senior year, Tian wasted no time in pursuing hands-on research experience.

In the spring semester of his freshmen year, he joined a neural engineering lab to gain practical wet-lab experience, but he realized that neuroscience-based research wasn’t what he ultimately wanted to do. He began working in a BME-lab that involved computational biology, but while he found the work interesting, he realized he still wanted to pursue wet lab research. The understanding led him to Nenad Bursac’s lab.

“By the time the fall semester rolled around, I could tell I was already so much farther in experience than any of the undergrads, because I was able to have the time and support to work on something I found exciting.”

“As a student in the pre-med route, I was really curious to pursue research that could showcase how biomedical engineering can translate into the clinic,” says Tian. “When I heard about the Bursac lab and their work with cardiac regeneration, it sounded like everything that I was looking for.”

Since joining the lab in the spring of his sophomore year, Tian has assisted Bursac and graduate students as they engineer bacterial genes that can help heart muscle cells electrically activate.

Healthy heart tissue is made up of cells covered in sodium ion channels, which are proteins that allow the tissue to respond to electrical signals. But when heart tissue is damaged from an illness or injury, such as a heart attack, the muscle can no longer contract and pump cohesively.

The Bursac Lab’s approach to this problem involves delivering the genes responsible for creating sodium channel proteins to heart cells to enable the creation of new ion channels in diseased cells. According to Tian, these new ion channels would help boost the electrical activity of damaged tissue.

Tian was helping the team with this line of research, but by his junior year, he was itching to get more independence in the lab.

“I had a chance to begin the Pratt Fellows application and sit down with Dr. Bursac to discuss what projects I could pursue within our research area, and he had a few ideas that he could set me loose on,” says Tian. “It was great to have a set of options that I could just run with.”

Ultimately, Tian decided to focus on a project that involved exploring how to increase the levels of sodium channel proteins created in key areas of the heart cells.

“We can introduce these genes into cardiac tissue, but then we just hope that they produce a lot of it and that it goes to all the right places,” explains Tian. “But because the initial protein is from a bacteria and we’re introducing it into mammalian cells, there are no guarantees that it will work. For my project, I wanted to see if we could engineer existing protein delivery pathways in these cells to also deliver the new sodium channel protein.”

Although Bursac and his graduate mentors gave him a significant amount of freedom in the work, Tian is grateful that the team was also there to provide help or answer questions when a problem arose. Tian also realized that working in the lab full-time over the summer as a Pratt Fellow enabled him to become more comfortable with his own research and wet-lab work.

“By the time the fall semester rolled around, I could tell I was already so much farther in experience than any of the undergrads because I was able to have the time and support to work on something I found exciting,” says Tian.

“The Pratt Fellows program gave me a very deep understanding of what research is like in an academic setting, like how to go about actually forming research questions, how to plan out and optimize experiments, and how to efficiently review the existing literature around a project, and even how to balance the cost and present your findings,” he says. “I came out of the program feeling like I had a high degree of ownership over my project, and to me, that was incredibly valuable.”