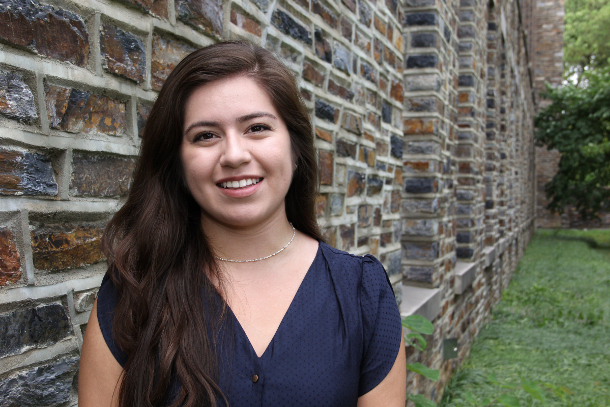 Where are you from?

I’m from the middle-of-nowhere Illinois about an hour west of Chicago. I’m a first-generation college student who didn’t have much help preparing my college applications and essays, so I really didn’t think I could get into Duke. But I was accepted and offered a full ride because of my family situation, so I jumped for the opportunity.

Why did you choose Duke?

I knew I wanted to do biomedical engineering, so Duke was at the top of my list for places to apply. I’m part of the Pratt Fellows program, which gets undergraduates doing research in the lab both during the school year and over the summer. I work in the laboratory of Miguel Nicolelis trying to develop a brain-controlled system that would allow people to not just move robotic prosthetics, but also to receive meaningful feedback from the limbs like pressure and temperature.

What is your research project about?

Last year I learned how to handle the monkeys to conduct experiments. I’ve been helping graduate students with their research projects, but next semester I get to start on my own work. I’m trying to create a virtual reality system for testing the brain-machine interface, because the monkeys aren’t really very mobile in their current experimental setup. Having a system that lets them feel like they’re actually moving around even though they aren’t would be a big help in learning how their minds react and operate.

What do you plan to do after graduation?

I’m not sure what I’m going to do after graduation. I’ve been talking with the career department to try to figure it out. I think I’m probably going to take a break from school and look for a job to gain some experience, but I do think that I’ll eventually come back to work on a master’s degree or PhD.

What else are you involved in on campus?

I’m a member of Sabrosura, the Latin dance group here on campus. We mostly dance salsa but can also tango and cha-cha and samba. We have a lot of on-campus performances, including our big showcase in April where we choreograph 10 of our own dances. Last year we nearly filled Reynolds Theater, so I think we’re pretty well known on campus.

Next year I’m also going to be the co-president of the Society of Hispanic Professional Engineers. When I was a freshman, I remember wishing there was a bigger, more active community of Latino students, so my co-president and I are going to try to make the group much more prominent on campus in the coming year.

What would you tell high school students considering coming to Duke?

I would tell prospective students to really focus on their application essay. Your GPA and test scores will get you through the initial filters, but your essay is what really makes the admissions committee remember you.

I think the admissions committee does a really good job knowing who they are picking and who will fit in well at Duke. I actually never even visited campus before accepting their offer for admission. The first time I was in Durham was when I was moving in, but I still feel like Duke was a really good fit for me.

All of the students on campus are really well rounded, and the campus is well rounded too. There’s a lot more going on than just academics, with all of the extracurricular opportunities and, of course, athletics. I’ll never forget the night the men’s basketball team won the national championship. Everyone was going wild and I was hugging people I didn’t even know. Even though there is some academic competition between students, in the end it all falls away. We’re all Blue Devils.

Dispensing Liquids into a Zero-Waste Future