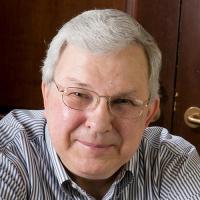 Henry Petroski received his bachelor's degree from Manhattan College and his Ph.D. from the University of Illinois at Urbana-Champaign. Before coming to Duke in 1980, he had taught at the University of Illinois and the University of Texas at Austin and was a group leader at Argonne National Laboratory, where he was responsible for research and development efforts in fracture mechanics. He is a professional engineer registered in Texas, and a chartered engineer registered in Ireland. At Duke, he has a secondary appointment as a professor of history. From 2004 through 2012 he held a Presidential appointment as a member of the U.S. Nuclear Waste Technical Review Board.

Professor Petroski's current research activity focuses on the interrelationship between success and failure in design. He also has a strong interest in the nature of invention and in the history of technology. His research has been sponsored by the Corps of Engineers, the National Science Foundation, the Alfred P. Sloan Foundation, and other organizations. He has published, in addition to nineteen books and hundreds of articles in newspapers, magazines, and trade journals, over seventy-five refereed journal articles in such places as International Journal of Fracture, Engineering Fracture Mechanics, Journal of Applied Mechanics, Structural Safety, and Research in Engineering Design.

Professor Petroski is author of the book, To Engineer Is Human: The Role of Failure in Successful Design (1985), and is the writer and presenter of the 1987 BBC-television documentary, "To Engineer Is Human," which has been broadcast on PBS. He is also the author of The Pencil: A History of Design and Circumstance (1990), The Evolution of Useful Things (1992), Design Paradigms: Case Histories of Error and Judgment in Engineering (1994), Engineers of Dreams: Great Bridge Builders and The Spanning of America (1995), Invention by Design: How Engineers Get from Thought to Thing (1996), Remaking the World: Adventures in Engineering (1997), The Book on the Bookshelf (1999), Paperboy: Confessions of a Future engineer (2002), Small Things Considered: Why There Is No Perfect Design (2003), Pushing the Limits: New Adventures in Engineering (2004), Success through Failure: The Paradox of Design (2006), The Toothpick: Technology and Culture (2007), The Essential Engineer: Why Science Alone Will Not Solve Our Global Problems (2010), An Engineer's Alphabet: Gleanings from the Softer Side of a Profession (2011),  To Forgive Design: Understanding Failure (2012), The House with Sixteen Handmade Doors: A Tale of Architectural Choice and Craftsmanship (2014), and The Road Taken: The History and Future of America's Infrastructure (2016). He writes the engineering column for American Scientist and a column on the profession for ASEE Prism. He also lectures widely and is interviewed frequently on radio and television.

Structural engineering; design; interrelationship between success and failure in design; nature of invention; history of engineering and technology.