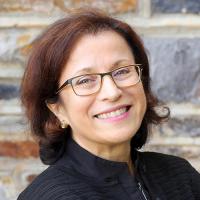 Professor Ana Barros was born in Africa, grew up in Angola and Portugal, and has lived almost all of her adult life in the United States. She attended the Faculty of Engineering of the University of O’Porto where she obtained a summa cum laude Diploma in Civil Engineering with majors in Structures and Hydraulics in 1985, and a M.Sc. degree in Ocean Engineering in 1988 with a thesis focusing on numerical modeling of sediment transport in estuaries and coastal regions. In 1990, Dr. Barros completed and M.Sc. degree in Environmental Science Engineering at the OHSU/OGI School of Science and Engineering. She earned a Ph.D. in Civil and Environmental Engineering from the University of Washington, Seattle in 1993. Her graduate studies were supported in part by fellowships from the Portuguese Foundation for Science and Technology (FCT/JNICT), and NASA’s Graduate Fellowship program.  She is registered with the Portuguese Order of Professional Engineers since 1986.

Dr. Barros was in the engineering faculty at the University of Porto, Penn State University, and Harvard University before joining Duke University in 2004. Her primary research interests are in Hydrology, Hydrometeorology and Environmental Physics with a focus on water-cycle processes in the coupled land-atmosphere-biosphere system particularly in regions of complex terrain, the study of multi-scale interface phenomena in complex environments across the Earth Sciences, remote sensing of the environment (precipitation, clouds, soil moisture, and vegetation), climate predictability, extreme events and risk assessment of natural hazards. Prof. Barros is especially proud of having involved dozens of students in undergraduate research, a great majority of which continued their studies to earn graduate degrees in science and engineering.  Over recent years her work has focused on precipitation processes including microphysics and dynamics or orographic precipitation, and land-atmosphere interactions in mountainous regions from the Himalayas to the Andes and the Southern Appalachians including Land-Use Land-Cover Change impacts on regional climate. Her research relies on intensive field and laboratory experiments, large–scale computational modeling, nonlinear data analysis and environmental informatics.

Prof. Barros served in the Space Studies Board of the National Research Council, and in several committees of the Water Science and Technology Board and the Board of Atmospheric Sciences and Climate including the Climate Research Committee, and she was a member of the US National Committee for the International Hydrology Program (IHP) of the UNESCO.  She served as an elected member of the Council of the American Meteorological Society, and serves and served in several committees within the American Meteorological Society and the American Geophysical Union. Prof. Barros was a member of the NOAA’s Climate and Global Change Program and serves or has served in several working groups at NASA, NSF and DOE-ARM. She has been an active member of several professional organizations including the IEEE, ASCE, AGU, AMS, AAAS, EGS, ASEE, and AWRA, and she currently serves in the ASCE committee on Climate Change and Adaptation. Prof. Barros was the Chief Editor of the Journal of Hydrometeorology for five years, and she was an AE of the Journal of Hydrology until 2015 among other editor posts. She has been a Senior Fellow who the Energy and Climate Partnership of the Americas (ECPA) since 2011.

Prof. Barros received Early Career Investigator awards from NSF and NASA in 1995 and 1996. She was a George W. Merck Faculty Fellow at Harvard University 1999-2003, and Packard Fellow nominee from Penn State University. She received the Prize Foundation A. Almeida in Engineering in 1985, and the Lorenz G. Straub Award for her Ph.D. thesis in 1993, and the NASA GSFC Robert H. Goddard Award (GPM GV Team), Category of Exceptional Achievement in Science in 2014 for contributions in support of the Global Precipitation Measurement Mission.  Dr. Barros is a Member of the ASCE, Senior Member of the IEEE, a Fellow of the American Meteorological Society, and a Fellow of the American Geophysical Union.  She was the AMS Sigma-Xi Distinguished Lecturer 2014-2015.

Physics of water cycle processes in mountainous regions with a focus on cloud formation and precipitation; remote sensing of the environment using microwave and infrared sensors; long– range predictability and risk analysis of natural hazards; computational environmental fluid mechanics and nonlinear dynamics; and the development and application of information technology as a research tool and in the operation of complex engineering systems.