Zooming in on Neuronal Behavior

With novel approaches to studying neurons, Yiyang Gong and Michael Tadross seek to understand the body’s most complicated organ 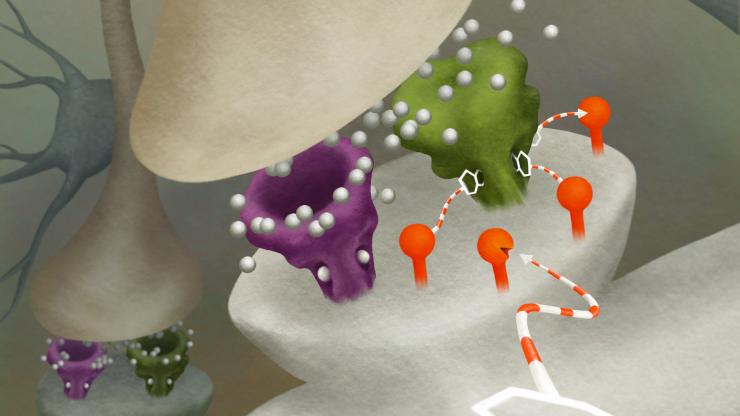 There are more than 86 billion neurons in the brain. These cells communicate by sending electrical and chemical signals across pathways and are responsible for controlling everything from simple movement to the processing and storing of complex thoughts and memories. The sheer enormity of this neural network makes the brain a difficult frontier for exploration, but Michael Tadross and Yiyang Gong, two faculty in Duke University’s Department of Biomedical Engineering and recipients of the NIH Young Innovator Award, are using distinct approaches to decipher the body’s most complex organ.

A Molecular GPS to Target Neurons

Michael Tadross, MD, is an assistant professor in Duke BME, where his lab uses a novel technology dubbed DART, or Drugs Acutely Restricted by Tethering, to deliver pharmaceuticals to specific cells within the brain. By harnessing DART, Tadross and his lab hope to develop a better understanding of how drugs work in the brain. 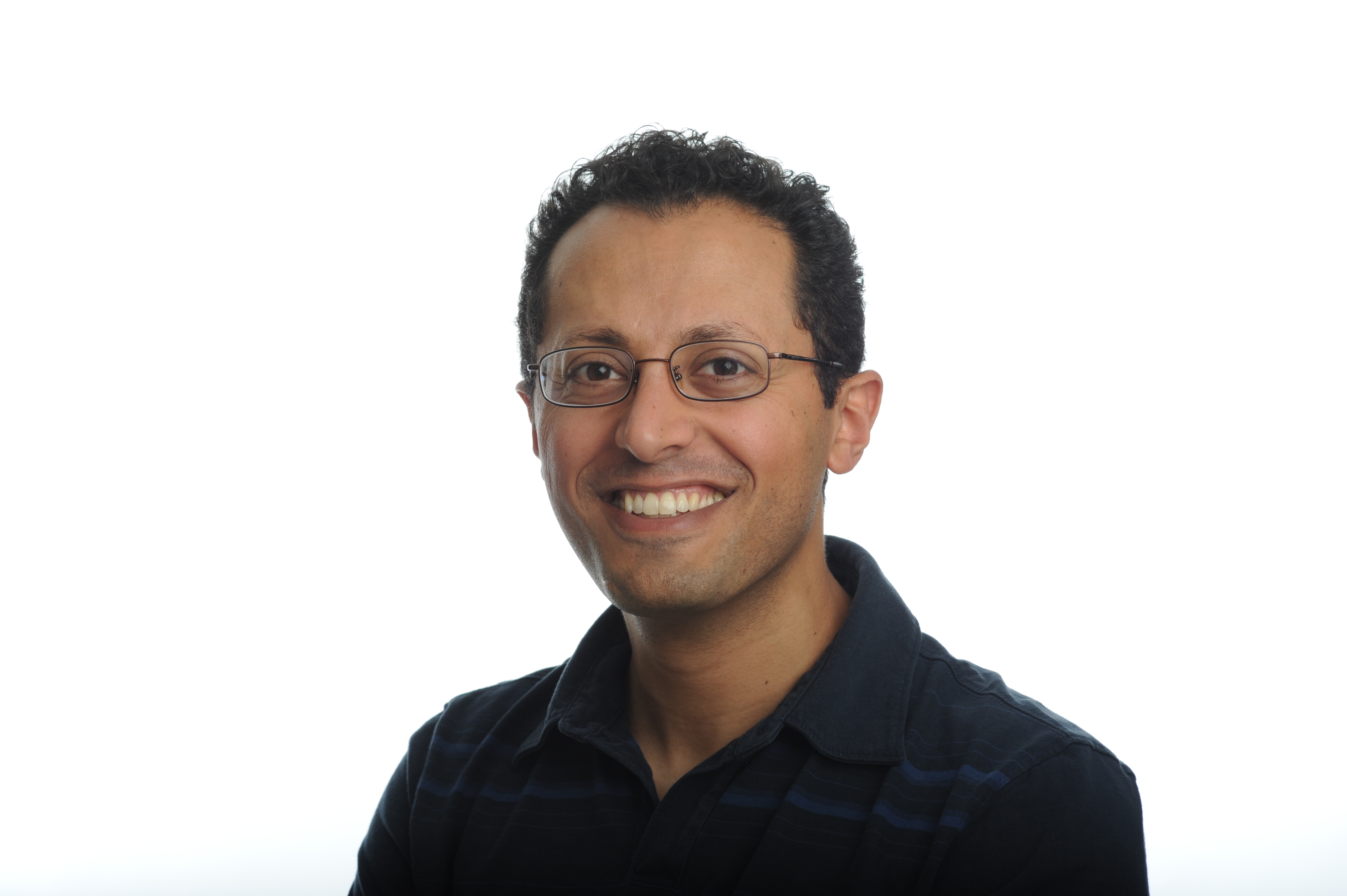 “Drugs have been really important in the history of neuroscience and neuropsychiatric disease, and I think we take it for granted that brain diseases are biological diseases. There was a time when that wasn’t widely believed to be true,” says Tadross. “The turning point came in the 1950s, after drugs were accidentally discovered to have an effect on disorders like depression.”

This discovery set off a race to discover exactly what these drugs are binding to in the brain, with the goal of better understanding the fundamental basis of brain disease. More than 60 years later, researchers still lack this deeper understanding.

But DART could address these long standing questions by enabling Tadross and his team to target drugs to one type of neuron at a time.

Drugs today are unable to discriminate between different groups of cells. For example, when someone is treated for a mood-related disorder like depression, they are prescribed a drug called an SSRI. These drugs target a receptor that reabsorbs the chemical messenger serotonin, a neurotransmitter that plays a role in mood. SSRIs block these receptors, boosting the amount of serotonin in the brain.

The problem with this approach is that there can be thousands to millions of cells that express the same receptor, so when you take a drug, it affects all of those cells at the same time, often leading to a complex set of effects. While SSRIs, for example, may effectively treat depression, they can also have a negative effect on anxiety.

“There has already been a lot of work tailored toward locally infusing drugs into specific parts of the brain, like the amygdala or the prefrontal cortex,” says Tadross. “But DART allows you to do that to a far greater degree of specificity.”

DART works by genetically programming specific cell types to express a virus that acts like a GPS beacon. This beacon, made of a protein found in bacteria, coats the surface of target cells, and attracts drugs loaded with a special homing device. When a drug is introduced into the system, it’s captured by this beacon and creates a locally high concentration of the drug.

“There is a universal on-off switch for every drug, and that’s the dose,” says Tadross.

“The homing device and GPS beacon are so efficient that the concentration of the drug on the cells of interest accumulates to become 1,000 times higher than anywhere else within a few minutes, so it’s only acting where you want it to. The simplicity of that idea allows it to work for virtually any drug.”

Tadross and his lab are using DART to untangle the mysteries of the human brain, starting with movement disorders like Parkinson’s disease. The team has focused their efforts on the striatum, a structure in the basal ganglia, which helps control speech, movement and posture. Among the different cell types in the striatum are D1 and D2 cells, which are tightly intermingled, but communicate to different brain regions.

To explore the role of glutamate in Parkinson’s disease, Tadross and his lab worked with a Parkinson’s mouse model. These animals have difficulty moving, develop a curved posture, and can only turn in one direction. Rather than treat the disorder by increasing dopamine (the standard treatment), they used DART to stop the D2 type of neuron from compensating by delivering a glutamate antagonist specifically to these cells in the striatum. The animal’s movement dramaticallyimproved. Remarkably, this improvement was only seen when the drug was targeted exclusively to D2 cells; delivering the drug to both D1 and D2 cells had no benefit.

“At first we were surprised to see such a dramatic effect, since we knew that glutamate antagonists have historically never worked to treat Parkinson’s. In retrospect, it made perfect sense. You can think of it like a seesaw where there is an imbalance in the circuit; targeting a drug to just one of the cells is a great way to rebalance the seesaw,” says Tadross. “There are still many questions left to answer, and we’re now using newer DARTs to study how different neurotransmitters contribute to this disorder.”

Beyond investigating movement disorders, Tad ross and his team are interested in using DART to study issues like addiction, especially as it pertains to opioids. In 2018 alone, the Centers for Disease Control and Prevention reported that more than 68,000 people died from drug overdoses in the United States, and opioids were responsible for a majority of these deaths. The Tadross lab hopes to use their technology to examine which cells in the brain are the most helpful for pain relief and which cells are driving addiction.

“Every drug has some good things and bad things associated with it, but while there hasn’t been another drug that’s been able to match the pain-relief benefits of opioids, these drugs are so dangerous and addictive that their costs have outweighed their benefits,” says Tadross. “Our hope is to use DART to better understand how we can alleviate pain without introducing those negative side effects.”

“Wouldn’t it be great to understand how they work and finally develop a therapy that was designed on purpose rather than accidentally?” asks Tadross. “We don’t know the answers to those big questions, but we now have the tools that can point us in the right direction.”

Lighting Up the Brain's Activity

When Yiyang Gong describes has lab as interdisciplinary, he’s not exaggerating. His team creates tools at the intersection of neurobiology, optics and engineering. Gong is an assistant professor in Duke University’s Department of Biomedical Engineering, and his lab studies brain circuitry by recording, perturbing and controlling brain activity in various situations.

“Our goal is to record neural activity in novel ways,” says Gong. “Our lab uses interdisciplinary techniques to understand how neurons communicate with each other. We’re achieving this using sensors that we developed that flash in response to neural signals, and pairing that with microscopy tools that help us record those flashes.” 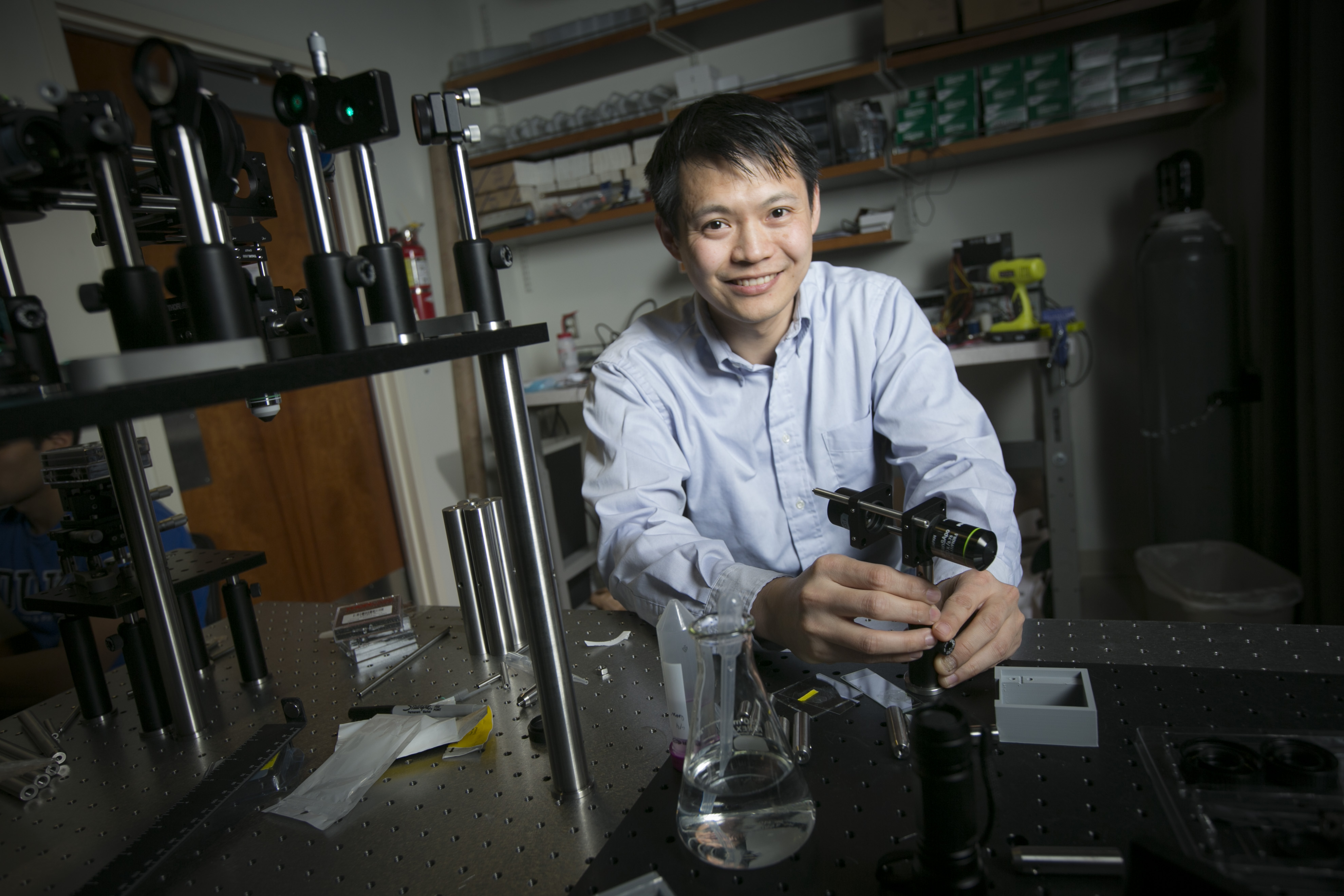 Neurons generate and communicate messages partly by changing their voltage. These electrical signals can be measured as single pulses from a neuron called an action potential, or as oscillating waves of activity from a group of neurons working together.

Gong and his lab have engineered voltage sensors made from pieces of DNA that can be delivered to target neurons using a virus. Once the virus is in place, the DNA encodes a protein that sits on the cell membrane and flashes in response to the neuron’s changing voltage. By genetically targeting different types of neurons with his sensor, Gong hopes to understand how these cell types oscillate together and contribute to different types of brainwaves.

Since their inception, Gong has been able to use these sensors in cell cultures, intact tissues and even live animal models. Now, the lab aims to improve these sensors by both increasing their speed and differentiating them by introducing multiple colors.

In addition to developing these genetic sensors, Gong and his team are exploring how they can advance microscopy tools to record their flashes. Previously, researchers have developed tools that can measure a few action potentials a second. According to Gong, there hasn’t been a push to speed up the imaging tools because that’s as fast as traditional optical sensors for neural activity have responded.

“With the advent of the genetically encoded voltage sensors, we also needed to develop really fast microscopy on the same timescales,” says Gong. “Our goal is to develop faster versions of fluorescence microscopes that can still image large portions of the brain.”

The Gong lab is also working on new methods to help process their incoming data. In collaboration with Sina Farsiu, the Paul Ruffin Scarborough Associate Professor of Engineering at Duke, Gong has developed an automated process that can rapidly gather and process neuronal signals for real-time behavioral studies.

Currently, identifying neurons in recordings is a painstaking process. The most accurate method involves a human analyst circling every ‘spark’ they see in a recording, often requiring them to stop and rewind the video until every targeted neuron has been identified. This process, called segmentation, is challenging and time-consuming, and a researcher can spend anywhere from four to 24 hours working on a 30-minute recording. 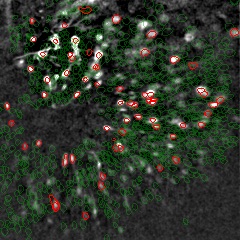 But the new algorithm developed by Gong and Farsiu can accurately identify and segment neurons in mere minutes. “Data analysts have spent hours and hours processing minutes of data, and that’s created a bottleneck in neuroscience that’s been a problem for a long time. But our algorithm can process a 30-minute video in 20 to 30 minutes,” says Gong. “We were also able to generalize its performance, so it can operate equally well if we need to segment neurons from another layer of the brain with different neuron size or densities.”

Gong is already using this new technique to study the relationship between neural activity and different behaviors in mice. By understanding which neurons fire during specific activities, his lab could learn how researchers can manipulate brain activity to modify behavior.

“The overall idea is that we can combine the technologies to not only do the overall data processing applications in the near future, but to use this tech in the far future to understand what the brain is doing in real time,” says Gong. “Neuroscience is a very cool discipline, and my lab allows us to take a lot of engineering concepts and apply them to the great unknown of brain activity.”