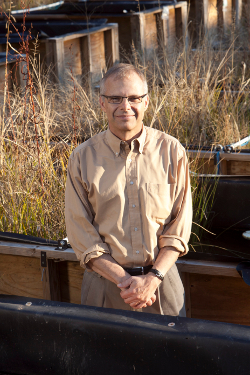 Wiesner, who holds the James L. Meriam Professorship of Civil and Environmental Engineering, is a recognized leader in the national and international civil and environmental engineering community. He brings a wealth of experience to the position as the highly successful leader of the Center for the Environmental Implications of NanoTechnology (CEINT), which will serve him well as he works to create equal if not greater success for the department.

In addition to his new duties as chair of CEE, Wiesner will continue his leadership of CEINT, which began in 2008 and was recently renewed by the NSF and EPA. His research leadership has earned him recent accolades such as the 2011 NWRI Athalie Richardson Irvine Clarke Prize for excellence in water research, and his induction this year into the National Academy of Engineering—one of the highest professional distinctions for engineers. He has made many important contributions to the research literature since his arrival at Duke in 2006, primarily focused on the potential for nanoparticles to accumulate in the environment.

Wiesner succeeds John Albertson, who, along with his wife, MEMS faculty member Silvia Ferrari, have accepted new positions at Cornell University. Under the leadership of Albertson since 2009, the department has been set on a solid path of excellence, vaulting up the U.S. News rankings of environmental engineering programs, and enjoying a 50 percent increase in new awards for research.

"I am very grateful for Mark’s willingness to take the reins of the department, and excited to see where his talents can take it," said Tom Katsouleas, dean of Duke’s Pratt School of Engineering. "I anticipate that under Mark’s leadership the department will continue to build on its upward momentum. Mark’s priorities include a focus on faculty hiring, expanded program offerings and growth in enrollment of both undergraduate and graduate students. I also believe his reputation for collaboration will strengthen and leverage interdisciplinary ties across both departmental and school boundaries."