Adapted from a press release from the University of Pennsylvania 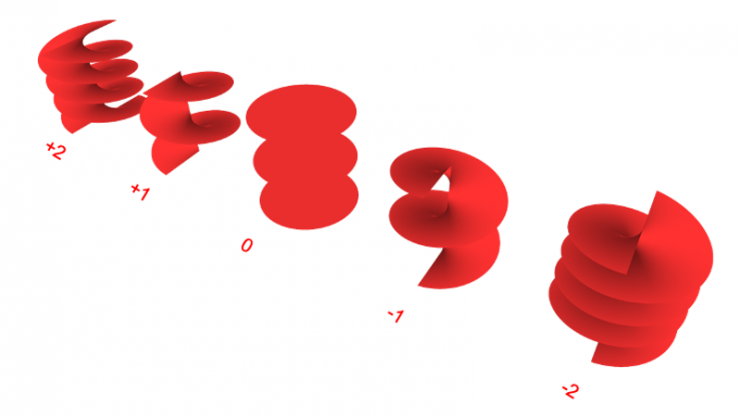 Researchers from a worldwide collaboration have demonstrated the ability to precisely control a property of a laser called its orbital angular momentum. The technology will allow researchers to transmit more data in optical communications devices, offering a new route to stay ahead of the world’s increasing demand for data.

The study appeared online on May 14 in the journal Science and was a collaboration between the University of Pennsylvania, Duke University, Northeastern University and the Polytechnic University of Milan.

“This work began when both Professor Feng and I were at the University at Buffalo and demonstrated the first on-chip microlaser that could emit a fixed shape,” said Natasha Litchinitser, professor of electrical and computer engineering at Duke. “We were excited to continue our work by helping Professor Feng’s group increase the amount of data their new laser system can potentially carry.”

As computers get more powerful and connected, their hunger for data is in a constant race with the technologies used to transmit it. Light-based optical fiber internet services from providers such as Google and AT&T are already replacing slower, outdated technologies based on electrons such as cable and DSL.

Much of the difference in bandwidth, however, does not come from light’s ability to outrace electricity. Instead it comes from “multiplexing” techniques—the ability to layer data into multiple aspects of a light wave, such as its amplitude, wavelength and polarization. But the aspects that scientists are able to control are beginning to run out, as is the amount of room left to store data in the conventional properties of light.

To break through this barrier, engineers are exploring some of light’s harder-to-control properties. In the new study, researchers have demonstrated a system that can manipulate one such property known as the orbital angular momentum (OAM), creating a microlaser that can be dynamically tuned to multiple OAM modes. Critically, they are the first to do so on small semiconductor chips and with enough precision that it can be used as a medium for transmitting information.

“I explain OAM to my classes by thinking about planets,” said Litchinitser. “Spin angular momentum (SAM) is a light wave spinning on its axis like the Earth spins on its axis, which gives us night and day. But you can also get light to rotate around its axis of travel like the Earth rotates around the moving sun. And if you visualize this dynamic in three dimensions, it looks like the light is traveling in a vortex.” 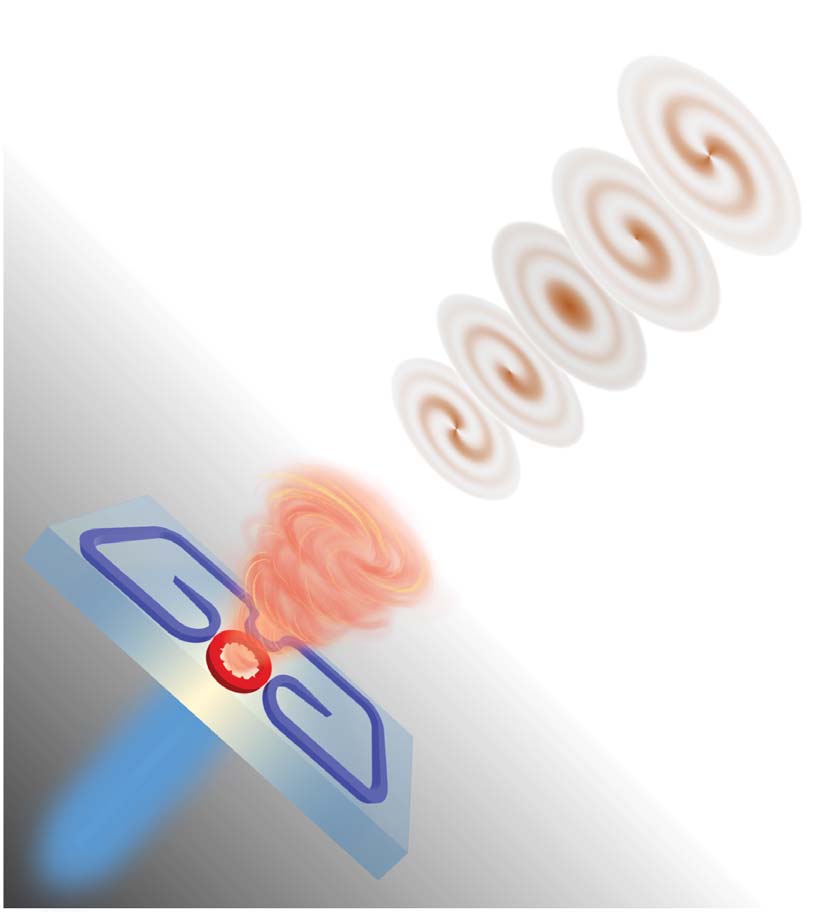 Such “vortex” lasers were first demonstrated by Feng and Litchinitser with quantum symmetry-driven designs in 2016. However, that original work and follow-up developments in the field have thus far been limited to transmitting a single, pre-set OAM mode, making them impractical for encoding more information.

In the most basic form of optical communication, transmitting a binary message is as simple as representing 1s and 0s by whether the light is on or off. This is effectively a measure of the light’s amplitude — how high the peak of the wave is — which we experience as brightness. As lasers and detectors become more precise, they can consistently emit and distinguish between different levels of amplitude, allowing for more bits of information to be contained in the same signal.

Even more sophisticated lasers can alter other properties of light, such as its wavelength, which corresponds to color, and its polarization, which is the orientation of the wave’s oscillations relative to its direction of travel. Many of these properties can be set independently of each other, allowing for increasingly dense multiplexing.

Orbital angular momentum is yet another property of light, though it is considerably harder to manipulate, given the complexity of the nanoscale features necessary to generate it from computer-chip-sized lasers.

This means that under highly controlled spin-orbit interactions, spin angular momentum can be locked or converted into OAM. To take advantage of this phenomenon, Feng, his graduate student Zhifeng Zhang and their colleagues began with a “microring” laser, which consists of a ring of semiconductor, only a few microns wide, through which light can circulate indefinitely as long as power is supplied. When additional light is “pumped” into the ring from control arms on either side of the ring, the delicately designed ring emits “spinning” laser light. Critically, asymmetry between the two control arms allows for the spin of the resulting laser to be coupled with its orbit in a particular direction.

Feng and his team were able to demonstrate the ability to dynamically control a laser’s OAM in three modes, -1, 0 and 1. These modes correspond to its chirality, or the direction the helices twist. Three modes, however, is not really enough to use in a multiplexing system for data transmission. To add more potential bandwidth to their technology, Feng turned to his former colleague.

Litchinitser and her research scientist, Jingbo Sun, proposed to take advantage of a spin-to-orbital angular momentum transformation, which was realized by adding a cylindrically non-uniform metamaterial structure in front of the device. Using this metamaterial structure made of flat, concentric metal rings, vortex beams with SAM of charge +1 or -1 and OAM of +1 or -1 were converted to radially polarized vortex beams with an OAM of charge +2 or -2. While the wavelength of the vortex remains the same at these additional modes, its twisting pattern changes.

“We demonstrated a microring laser that is capable of emitting five distinct OAM modes,” Feng said. “That may increase the data channel of such lasers by up to five times.”

And while the SAM can only take two values, +1 and -1, the OAM has an unbounded number of positive and negative states, meaning its manipulation could potentially enablean unlimited number of new communication channels.

“While this particular configuration enables us to get to the modes of 2 and -2, it can go further than that,” added Litchinitser. “We could achieve modes of 3 and -3 as well, or even further, but it would require a different design.”

The ability to dynamically tune OAM values could also enable a photonic update to a classic encryption technique: frequency hopping. By rapidly switching between OAM modes in a pre-defined sequence known only to the sender and receiver, optical communications could be made impossible to intercept.

By combining their unique expertise to fabricate on-chip tunable vortex microlasers, the collaborative team combining researchers from Feng’s and Litchinitser’s groups is now working to design integrated systems to demonstrate new concepts and applications, including multidimensional, classical, and quantum communication, optical manipulation, and computing. This demonstration of a new dimension for transmitting information based on OAM modes can help create richer superposition quantum states to increase information capacity by a few orders of magnitude.

This research was supported by the National Science Foundation and the U.S. Army Research Office and  was done in collaboration with Josep M. Jornet, associate professor at Northeastern University, and Stefano Longhi, professor at the Polytechnic University of Milan in Italy. Penn's Xingdu Qiao, Bikashkali Midya, Kevin Liu, Tianwei Wu, Wenjing Liu and Duke's Jingbo Sun significantly contributed to the work.