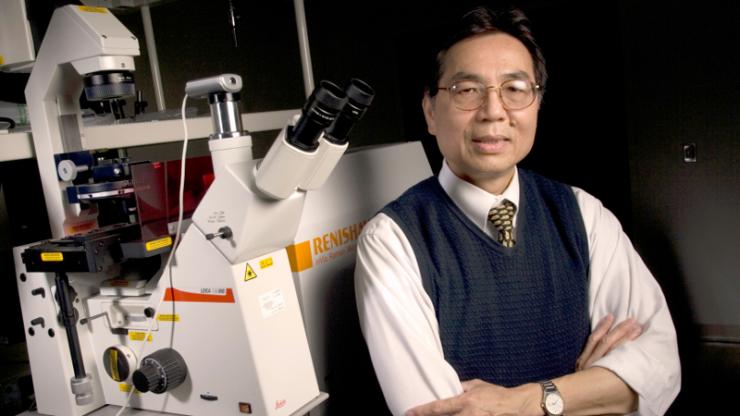 Tuan Vo-Dinh, the R. Eugene and Susie E. Goodson Professor of Biomedical Engineering, professor of chemistry, and director of The Fitzpatrick Institute for Photonics at Duke University, has been awarded the 2019 Sir George Stokes Award by the Royal Society of Chemistry (RSC). Vo-Dinh was recognized for his "outstanding and sustained contributions to analytical science through innovations in the field of photonics, spectroscopy, molecular biology and nanotechnology."

Vo-Dinh's research has produced a host of innovative technologies that have a profound impact in many fields for improving and protecting the environment and human health. Vo-Dinh was among the first to combine the recognition power of nature (e.g. antibodies) with light-based sensing technologies to develop powerful devices called biosensors.

"This award is very special to me as it underlines the importance of bringing together different disciplines to create innovative technologies in order to solve problems of global importance in analytical science," said Vo-Dinh.

The Sir George Stokes award is an award presented every two years by the RSC that recognizes outstanding and sustained contributions to analytical science by someone demonstrably working in a complementary field, which has led to developments of seminal importance to chemical analysis. The award includes a medal and £2000 in funding, and the recipients are invited to deliver lectures at up to four universities across the United Kingdom and Ireland throughout 2019.

The Royal Society of Chemistry's Awards and Prizes are awarded in recognition of originality and impact of research, or for each winner's contribution to the chemical sciences industry or education. They also acknowledge the importance of teamwork across the chemical sciences, as well as the abilities of individuals to develop successful collaborations. Of those to have won a Royal Society of Chemistry Award, 50 recipients have gone on to win Nobel Prizes for their pioneering work.