With an education steeped in novel solutions for solar energy production, Shomik Verma is the fifth Duke engineer to win the prestigious scholarship, and the first since 2011 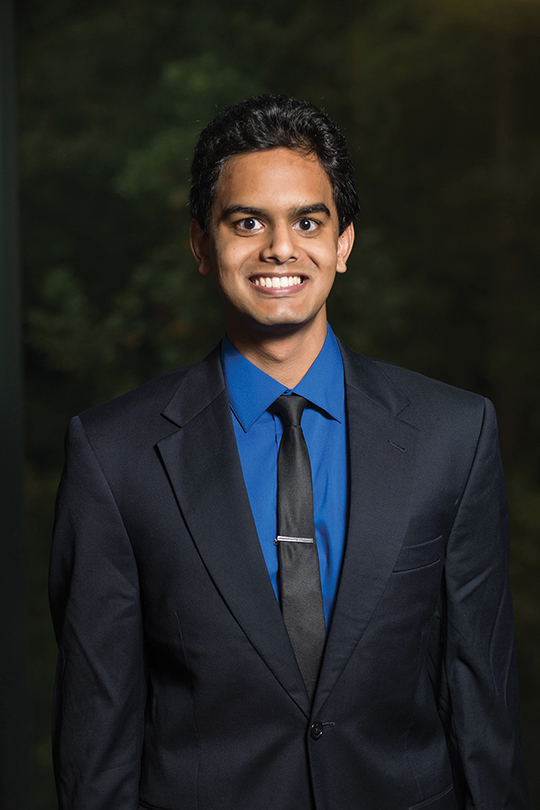 Shomik Verma, a senior studying mechanical engineering at Duke University’s Pratt School of Engineering, has been named one of this year’s 48 recipients chosen of the prestigious Marshall Scholarship.

Along with Julie Uchitel, a neuroscience and French double major at Duke, the two were chosen from among more than 1,000 applicants throughout the country and are the 28th and 29th Marshall recipients from Duke. Verma is the fifth Duke engineering student to earn the honor, and the first since 2011.

Approximately 40 Marshall Scholarships are awarded each year to high-achieving American students to pursue post-graduate studies at any university in the UK in any field. The award covers all university fees, cost-of-living expenses and many other costs.

“On behalf of the entire university community, I am delighted to congratulate Julie and Shomik on this great honor, which reflects their truly exceptional work at Duke,” said Duke President Vincent E. Price. “Throughout their time here, they have contributed not only in the classroom and lab but also through public service, cultural engagement and residential leadership. The Marshall Scholarship’s mission is to identify and support future leaders, and I am confident that Julie and Shomik’s experience at Cambridge University will prepare them for excellence in their chosen fields.”

“Shomik stands out among our student organizations’ leadership as being one of the most responsible, involved and passionate leaders that I have seen in over a decade with dozens of student groups each year,” said Linda Franzoni, associate dean for undergraduate education at the Pratt School of Engineering. “And with an intentional, cohesive plan for using the technical skills and knowledge he would acquire in college to lower the world’s reliance on fossil fuels, he is also the ‘poster child’ for what our National Academy of Engineering Grand Challenge Scholar Program is intended to accomplish.”

Verma has previously been selected for a Goldwater Scholarship and a Udall Scholarship. Faculty have chosen Verma to be both a Grand Challenge Scholar and a Pratt Fellow, honors that offer extensive lab experience. He was also elected to Tau Beta Pi and serves as co-president of Pi Tau Sigma.

For his Pratt Fellowship, Verma is working with Nico Hotz, assistant professor of the practice in mechanical engineering, on using solar thermal energy for hydrogen production. His research has focused on modeling, fabricating and testing a concentrated solar collector for dry methane reforming, the process of reacting methane with carbon dioxide to produce hydrogen. He has pursued further research in hydrogen as co-president and technical lead of the Duke Electric Vehicles team, building a hydrogen fuel cell car and leading a Duke student team to a Guinness World Record for the most fuel-efficient human-carrying vehicle ever built.

The Duke Electric Vehicles team also received top prizes at the 2018 Shell Vehicle Eco-Marathon: first place in both the Hydrogen Fuel Cell and Battery Electric Prototype categories, as well as a Technical Innovation Award for their supercapacitor storage system.

Verma is also president of the Duke Energy Club, through which he has worked with Duke’s Energy Initiative to create three new assistantships for students to do energy research with faculty, and is co-president of the Duke Smart Home, a living-learning community where residents live in a LEED platinum building and work on technological solutions to sustainability issues. He has also been involved with Duke’s Solar Spring Break program that takes undergraduates to underserved communities to install solar panels.

“At Duke, I’ve had the wonderful opportunity to ‘live the science’ through various hands-on experiences,” said Verma. “Whether it’s living at the Smart Home, installing solar panels or building high-efficiency vehicles, I’ve seen first-hand the benefits novel energy technologies can have on the environment and human health. Seeing these real-world applications motivates me to pursue a research career to develop innovative solutions to energy challenges.”

Skilled in playing an Indian classical drum called the tabla, Verma has worked to increase the visibility of Duke’s South Asian music group, Sangeet, on campus. This effort led to their first-ever performance in Duke Chapel during a Diwali service in fall of 2017.

Fascinated by the potential of renewable energy technologies to radically reduce human impact on the environment, Verma will join the lab of Dr. Rachel Evans at Cambridge University to pursue his near-term objective of developing novel materials that increase the efficiency of solar photovoltaic cells.

“When I first received the call that I was selected as a Marshall Scholar, I was in utter disbelief,” Verma said. “I had to check my phone’s call history several times to make sure I didn’t dream the whole thing! I’m so thankful for the support of my family, friends and advisors, and I’m beyond excited to spend the next two years in the UK working on developing the next generation of solar technology.”

Marshall Scholarships were established in 1953 by the British government to honor the ideals of the Marshall Plan and the special US/UK relationship.

A list of this year's recipients is available online.