For people with incurable chronic pain, a small device that periodically stimulates the spinal cord with a small electric pulse can bring much needed relief. But the implantable devices don’t work for everyone. And when they do work, only about 60 percent of patients experience a halving of pain -- a success rate that hasn’t budged in 40 years despite technological advances.

With support from the Duke CTSA through the Duke Translational Research Institute (DTRI) Collaborative Pilot Award, Warren Grill, a professor of Biomedical Engineering and Neurobiology, and Nandan Lad, a neurosurgeon, think they can do better. The key, they say, is to reprogram the devices to deliver pulses in a new way. 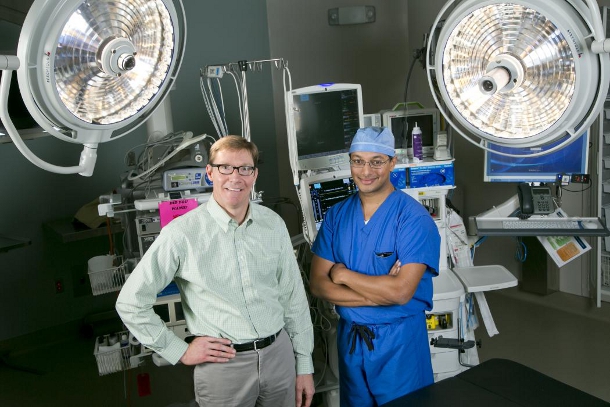 A Model for Pain Relief

Grill’s lab in the Department of Biomedical Engineering is focused on innovative therapies using electrical stimulation of the nervous system. Lad, too, is focused on medical innovation, driven in part by first-hand experiences with the limitations of spinal cord stimulation technologies he has seen through his patients. Their partnership began by looking at a simple question: how does spinal cord stimulation work to relive pain?

“Spinal cord stimulation has been around for more than 40 years,” Grill said. “Remarkably, people do not understand the underlying mechanism.”

To sort it out, the researchers developed a computational model to describe the behavior of neurons in the spinal cord that are responsible for processing pain. They showed that the model does a good job of reproducing published experimental results in the literature, evidence that it reflects what actually happens in the spinal cord’s pain networks. The model also led them to a promising prediction: spinal cord stimulation could be improved by changing the pattern and timing of pulses delivered to those pain neurons.

According to the model, neurons involved in the sensation of pain fire in a way that depends heavily on the frequency with which spinal cord stimulation is delivered. The model also suggests that changes in the way the devices are programmed to deliver pulses would produce a more than 30 percent improvement in pain control.

“In our innovative approach to spinal cord stimulation, what would change is the type of stimulation delivered,” Grill explained. “You can almost think about it as Morse code—a pattern of stimulation that from the data we expect will do a better job at treating pain than conventional patterns have.”

Early indications from animal studies in the lab suggest their new approach to spinal cord stimulation works as intended. Grill and Lad will begin recruiting patients with existing spinal cord stimulators to test the new approach in the coming weeks. The plan is to reprogram the devices some of Lad’s patients already have, to see if a new pattern of pulses reduces their pain in the expected way.

“There have been a lot of developments in hardware over the last several decades,” Lad said. “Going forward, software will become increasingly important. [The reprogrammed devices] will potentially use less energy and have better pain efficacy compared to traditional stimulation. It will be exciting to see how it works in patients.”

Grill and Lad have already filed two patent applications and they say these first-in-human studies will facilitate the translation of their work into a marketable product for the benefit of patients. Grill credits the geography of Duke—with an engineering school across the street from the medical center and hospital—and the DTRI-funding support for making it possible.

“This kind of funding is really critical because it allows us to translate this innovation into humans very quickly—much faster than we might otherwise be able to do,” Grill said. “Rather than having to go through a more conventional funding route that’s slower with much lower success, we’re able to rapidly take this from the computer and animal laboratory to an initial feasibility trial in humans.

“I think of these small supplemental grants as fertilizer,” he added. “They often produce an impact that is disproportionate to the dollars invested. They are also really important in promoting partnerships between the medical center and the campus.”