Tomasz Hueckel: A Pioneer in Environmental and Energy Geomechanics

There was a homecoming of sorts at the International Congress CERMODEL - Modelling and Simulation Meet Innovation in Ceramics Technology – conference held in Trento, Italy this summer. Tomasz Hueckel, professor of civil and environmental engineering at Duke University, left an industry job in Italy when he first came to Durham 28 years ago. 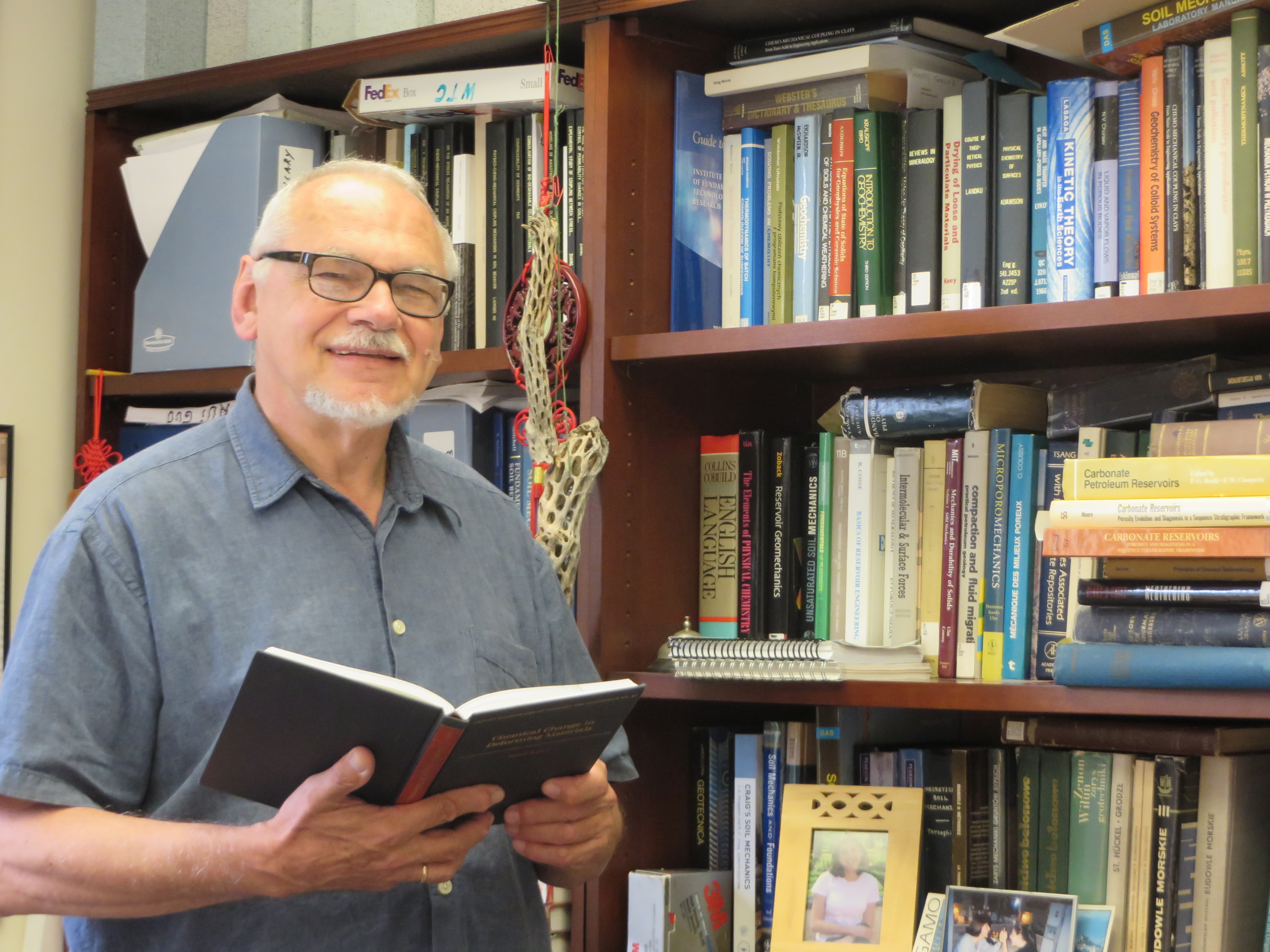 His students and colleagues were ready to welcome him back, as they organized a special session in honor of Hueckel’s 70th birthday.

“It is a tremendous honor when one’s colleagues make such a designation at a conference,” said Mark Wiesner, professor and chair of Duke’s Department of Civil and Environmental Engineering. “Tomasz is internationally known for his research in geomechanics for nonlinear and time-dependent problems, and he’s made many important contributions over the years.”

“I consider all of my students a sort of intellectual family,” said Hueckel, who was pleasantly surprised by the efforts put forth on his behalf. “One of the biggest satisfactions you can have as a mentor is when you start feeling envy toward your own students, who continue to move into research that I wish I had done 20 years ago.”

After a long and distinguished career, there aren’t many mechanical properties of the earth beneath our feet that Hueckel hasn’t had his hands in. Born, raised and educated in Poland, Hueckel began his career by developing the idea of elasto-plastic coupling.

People tend to think of elasticity as a constant property of a material. But when you look at the microscale forces and processes at work, you can see fissures or defects that produce changes in elasticity. And the same can be said for a number of non-mechanical processes like heat flux or chemical reactions, which also affect elastic behavior, strength and deformation. How these nearly unnoticeable phenomena build up in materials over time and lead to degradation and eventual failure is the basic concept of coupled elastic and plastic behaviors. They include elasto-plastic coupling, thermo-plastic coupling and chemo-plastic coupling.

Although Hueckel framed the groundwork for these concepts in the 70s and 80s, it wasn’t until the past two decades that the importance of some of the concepts became obvious. Thermo-plastic coupling is essential to assessing the viability of nuclear waste disposal in clays—a popular disposal practice in Europe. Chemo-mechanical coupling is one of the phenomena involved in carbon dioxide sequestration in carbonate rocks and fracking. 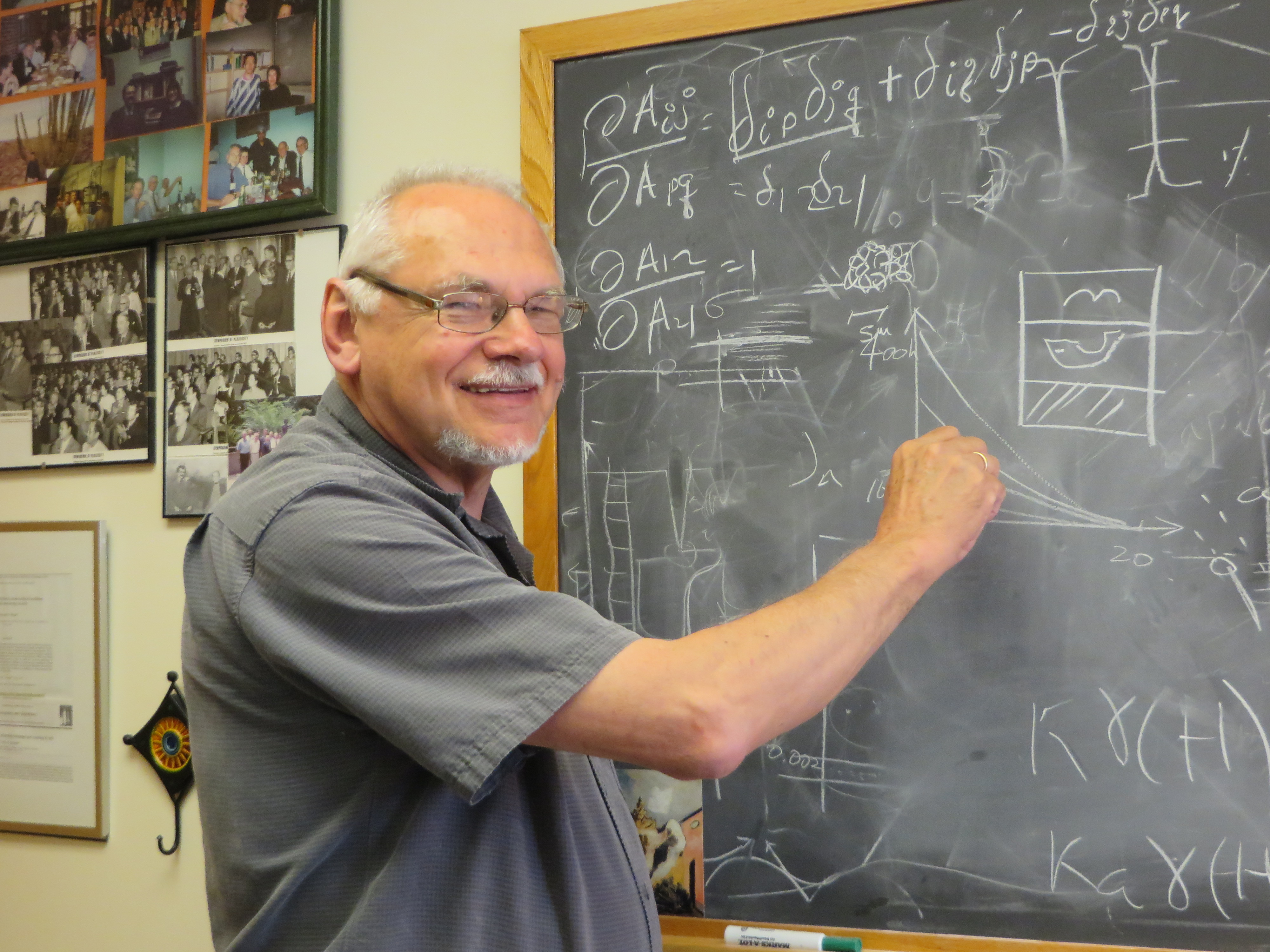 “There’s an old proverb that says the key to success is to be in the right place at the right time,” says Hueckel. “I was not as lucky because I was there, exploring coupled thermo-plasticity and chemo-plasticity, but a little bit ahead of time. Then again, one of the biggest satisfactions people of a certain age can have is to have thoughts that you originated come back to fashion 20 years later. Suddenly you’re the great-grandfather of a field that you thought had been completely ignored.”

Hueckel’s work is far from being ignored today. He received the 2008 John T. Booker Medal of Excellence, from the International Association for Computer Methods and Advances in Geomechanics for “pioneering work in the area of Environmental Geomechanics, in particular for seminal papers on thermo-plasticity of geomaterials and on chemo-mechanical coupling.” He was also awarded an annual 2011 Special Lecturer Award and Medal for exceptional contributions to geomechanics by ALERT – Geomaterials, an Alliance of European Laboratories of Research in Geomaterials.

Outside of coupling, Hueckel also worked on liquefaction of sand and cyclic mobility—a phenomenon related most closely with what happens primarily to soils in an earthquake. With persistent vibration during earthquakes, water inside the soil gradually pressurizes until it ruptures the solid structure of the ground, bringing failure.

He continued his research in Warsaw until 1981, when he and his wife left Poland a few weeks before the declaration of martial law. The couple moved to Rome, where Hueckel continued his research in cyclic mobility of soils at the University of Rome, La Sapienza, before finding himself working in the Italian energy industry, which was starting at that time a nuclear waste disposal program.

“It was an extremely useful experience for me,” says Hueckel, who spent more than six years living in Italy. “I was trained as a theorist, but in industry I learned that you really have to work together with experimentalists, or else you’re just dreaming. That isn’t a bad thing in principle, but to produce things that are useful, you have to have cyclic verification between theoretical thinking and experimental results.”

After the company he was working for became privatized and more focused on commercial activity, Hueckel began inquiring into university positions, which eventually landed him at Duke. According to Hueckel, Duke was a major point of reference in geomaterials before his time, with the late engineering dean, Alexandar Vesic, and he wanted to keep it that way. He arrived in 1987 and has been here ever since. In 1991 he organized at Duke an International workshop on Stress Partitioning in Engineered Clay Barriers, which brought to Duke people from 17 countries.

Hueckel’s recent research has been into the effect of various chemicals on the properties of geomaterials, very much with Italian collaborators.  One of the interesting aspects of that research focuses on crack propagation enhanced by chemical softening—a process heavily relied upon by the fracking industry to break through the solid rock to get to underlying natural gas.

“My graduate students and I are trying to figure out how much acid is truly needed, how forceful the injection should be and how far the acid will travel underground,” says Hueckel. “The fracking industry does not know exactly how much acid they need to use to soften the rock, and people usually think they use too much. My gut feeling is that the industry will go ahead independently of what we think, but we can certainly help improve and better control the process.”

Hueckel’s newest research topic is capillary forces. Although it is a well-established subject in soft condensed matter physics, one important detail has escaped the attention of physicists: evaporation of capillary liquid. This plays a key role in the cracking of drying soils and the entry of gas into granular media.

In this research, Hueckel and his students had to resort to basic tools of physics theory not commonly studied by engineers.

“One result of 20th century specialization is that there’s a certain amount of knowledge that students of one discipline are supposed to learn, and others, like chemistry, are taught at very basic levels,” said Hueckel. “When you look at phenomena that you do not understand, you think in terms of the tools that you have been given. But if you don’t have a set of tools in a certain area, you’ll never think in those terms.”

Hueckel has recently branched out of writing papers and is helping to curate them. Along with colleague Lyesse Laloui from the Federal Institute of Technology (EPFL) in Lausanne, Switzerland, Hueckel has launched new Elsevier journal called “Geomechanics for Energy and the Environment.” As his advice suggests, the research in the journal is based on multi-disciplinary approaches to multi-physics—and often multi-scale phenomena—that characterize many engineering problems related to modern day geomechanics.

For any students hoping to follow in Hueckel’s footsteps as an esteemed researcher for multiple decades, he has one piece of advice—branch out, adopt a multi-disciplinary vision of the problems.