In his work with Duke’s Center for Materials Genomics, Stefano Curtarolo provides the theoretical underpinning for creating novel materials with distinctive properties. While these insights will certainly help further the development of new materials, one of his Duke collaborators used the theories to improve materials already in production for use in everyday products—in this case carbon nanotubes.

These nanotubes are man-made, microscopic, “mesh-like” tubular structures that are used in hundreds of products, such as textiles, solar cells, transistors, pollution filters and body armor. Curtarolo saw his theories of optimizing the properties of nanotubes confirmed by a series of intricate experiments conducted by Jie Liu, Duke professor of chemistry. Liu developed a novel method for measuring not only the lengths of growing carbon nanotubes, but also their diameters.

“Normally, nanotubes grow from a flat surface in an unorgan- ized manner and look like a plate of spaghetti, so it is impossible to measure any individual tube,” Liu said. “We were able to grow them in individual parallel strands, which permitted us to measure the rate of growth as well as the length of growth.” 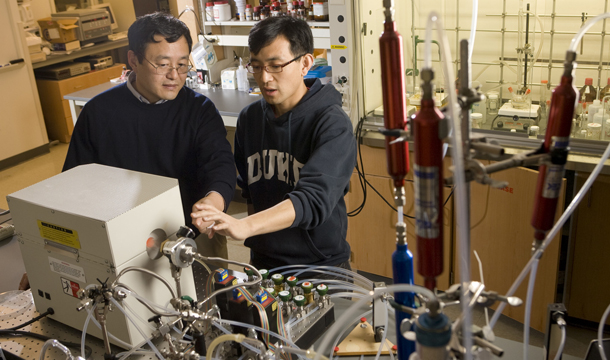 By growing these nanotubes using different catalyst particle sizes and at different temperatures, Liu was able to determine the “sweet spot” at which the nanotubes grew the fastest and longest. As it turned out, this occurred when the particle was in its viscous state—between a solid and liquid—and that smaller was better than larger, exactly as predicted by Curtarolo.

These measurements provided the experimental underpinning of Curtarolo’s hypothesis that given a particular tempera- ture, smaller nanoparticles are more effective and efficient per unit area than larger catalysts of the same type when they re- side in that dimension between solid and liquid.

By reliably controlling the growth and size of these carbon nanotubes, manufacturers will be able to take full advantage of their properties. These findings will also help manufacturers grow the nanotubes faster and more efficiently, Liu said.

“Typically, in this field the experimental results come first, and the explanation comes later,” Liu said. “In this case, which is unusual, we took the hypothesis and were able to develop a method to prove it correct in the laboratory.”