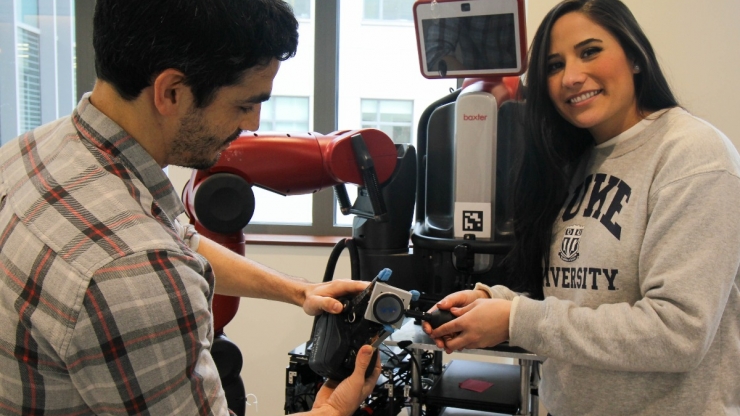 Some engineers love attacking challenges that others dismiss as impossible. Some like to dream about winning monster-sized prize purses worth millions of dollars. Some simply want to take a shot at developing or refining technical skills.

The XPRIZE Foundation offers all of these opportunities and more, by putting forth a monumental challenge which, once solved, will enable a more positive future. A sponsor supports each competition—there have been 17 of them to date—by providing the prize purse and operational funding. The first XPRIZE was the $10 million Ansari XPRIZE for private spaceflight, which birthed an entire industry of private space tourism. Years later, the $20 million Shell Ocean Exploration XPRIZE tasked teams with the ambitious challenge of mapping the ocean floor.

XPRIZE competitions are a favorite teaching tool of Duke professor of electrical and computer engineering (ECE) Martin Brooke, who along with Duke ECE colleague Tyler Bletsch, led a student team that made it to the semi-finals of the Ocean XPRIZE competition and split the $1 million purse with the nine other teams who achieved the same level.

The $10 million ANA Avatar XPRIZE competition aims to “create an avatar system that can transport human presence to a remote location in real time.”

This spring, Brooke’s Advanced Robotic System Design class was the launchpad for another group of students ramping up to compete in Duke’s third multi-year XPRIZE challenge: the ANA Avatar XPRIZE. The $10 million competition aims to “create an avatar system that can transport human presence to a remote location in real time.”

Imagine trekking to Denali and feeling the cold wind on your face and the crunch of ice under your boot treads, without ever leaving your living room, or visiting your grandfather on the other side of the world twice a week. Or—in an application made painfully relevant by the current COVID-19 crisis—delivering lifesaving medical care during times of war or contagion, without exposing yourself to danger. Those are the kinds of long-term possibilities that the ANA Avatar XPRIZE competition is hoping to enable.

Brooke and his students partnered with the University of Illinois and VRotors, LLC, and the resulting team is focused on creating a health care avatar. Through collaboration with Duke School of Nursing’s Ryan Shaw, the Duke contingent has access to a robot called TRINA— Tele-Robotic Intelligent Nursing Assistant--that is used to develop future remote nursing applications similar to the ones sought by the ANA Avatar XPRIZE competition.

At the beginning of the semester, the Duke students split into three groups to work on different aspects of their avatar, called AVATRINA: motion planning, a digital stethoscope, and smelling ability.

Motion planning, explained Estelle He ECE ’20, is about transforming a human’s motions into corresponding motions in the robot.  Her group of three students found a Python implementation of some code they could use on Tensor Flow, a platform for building and deploying machine learning models, but it was only a starting point. 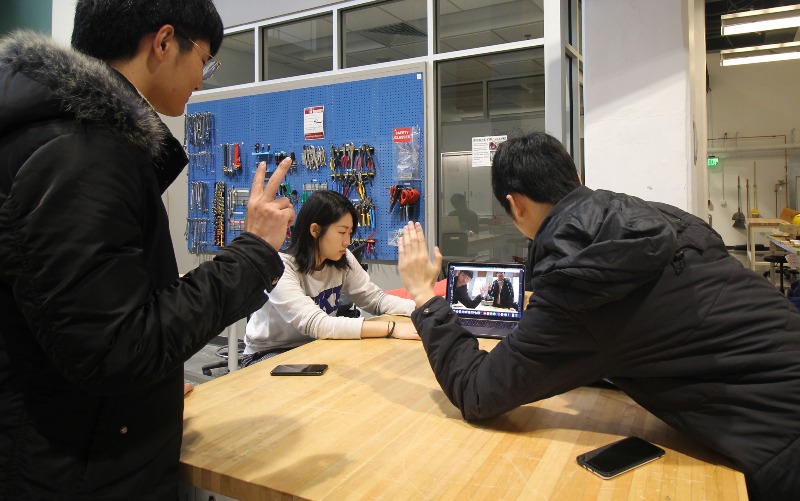 “The code gathers video from a computer camera and extracts points on the human skeleton based on the video,” said He. “But what we actually need is the coordinate of those points, so we have to dig through the code and change so that it’s more customized to our uses.”

“Motion planning matches the scales and transforms my motion into the robot’s action.”

That’s because the robot is moving in 3D space, so an extra dimension—depth—is requisite to controlling the avatar. “Maybe my elbow moves one centimeter, but the robot’s elbow moves five centimeters, because of the difference in scale,” said He. “Motion planning matches the scales and transforms my motion into the robot’s action.”

Another group of three students—two PhD students and an undergraduate mechanical engineering student —started working with TRINA to figure out how a digital stethoscope might work in this kind of application. Their initial challenge was that the instrument is made to be held and manipulated by a human hand; the team had to design and 3D print an adapter for the robot’s claw before the signal processing aspect of the work could even begin.

And then there’s the smell team, which began by trying to determine what kind of sensors could be incorporated into the avatar to give it the ability to recognize when food or medication has gone bad, or tissue infection has begun to set in.

The teams are self-directed; prior to spring break, they met with Brooke once a week and spent the remainder of their time building and coding. After spring break and the implementation of physical distancing resulting from the threat of Covid-19, students continued to meet weekly via Zoom. “The students got a surprising amount done after the stay-at-home order,” Brooke said. While the motion planning group focused more on the software and simulation portions of its project, students on the smell and digital stethoscope teams had most of their hardware with them and continued to work on their projects from their homes.

“There are no tests, no lectures. We just look for results.”

“I teach a lot of design-oriented courses and its always challenging to come up with good motivational projects,” said Brooke. “I’ve done every kind of project and working with these big contests has been really successful.” He said that’s in part because the challenges are so large and so broad that they attract engineers from every discipline, forming teams that bring together diverse knowledge and result in far-out approaches—and exceptional engineers.

“It’s a very different way to teach,” said Brooke. “There are no tests, no lectures. We just look for results.”